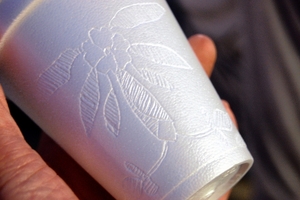 Join us to demand that President Obama close, not relocate, but close the Guantanamo prison.

Daily updates from the (just completed) 7-day fast and week of action in Washington DC were written by our friends at Witness Against Torture. You can read them directly, as well as see accompanying videos at this link. Voices has had yearly representation at this event.

Here in Kabul, young friends with the Afghan Peace Volunteers look forward to learning more about “The Tea Project” in late December, when Aaron Hughes arrives, an artist, a U.S. military veteran, and a core member of Iraq Veterans Against War. He’ll carry with him 20 plaster replicas of a standard-issue, factory-made Styrofoam cup. They’re part of a set numbering 779 replica cups, each cup dedicated to prisoners detained in Guantanamo. In the entire collection, 220 of the cups bear names of Afghan citizens imprisoned in Guantanamo.

In Guantanamo, with each evening meal, Guantanamo prisoners are served tea in styrofoam cups. Many prisoners etch floral designs into their cups, which become a nightly artistic outlet for men with few other freedoms allowed them. Aaron had heard a former Guantanamo guard describe how deeply he grew to deeply love the cups that had become works of art.
The cups would then be collected, each night, and turned over to military intelligence which most likely just dumped them. Aaron’s cups are more durable. A Guantanamo prisoner’s name is written on the base of every cup, and each carries a unique design. Following the practice of the prisoners, Aaron focused on etching floral patterns into the cups he created, displaying flowers that are native to each prisoner’s homeland. 220 of the cups he has sculpted bear the names of prisoners from Afghanistan.
Life stories represented by each cup are reaching a wide variety of individuals and groups during Aaron’s travels on behalf of the project. He invites people to sit with him, sip tea from the cups, and talk about their stories related to war, destruction, peace, love, creativity …the conversations range freely, but the cups bring a certain focus, remembering the prisoners in Guantanamo.
I wish that Aaron could somehow sit across from Tariq Ba Odah and serve him tea. Now 36 years old, Tariq Ba Odah, a Yemeni citizen, arrived in Guantanamo in 2002, when he was only 23. Detained without charge in Guantanamo since 2002, Tariq has maintained a hunger strike since 2007. He now weighs 74 pounds. His lawyers say that he visibly suffers from severe effects of malnutrition and is at serious risk of permanent physical and neurological impairment and death. Tariq Ba Odah endures horrible force feeding rather than cooperate with the system that has separated him and the other prisoners from loved ones, subjecting them to torture and dehumanizing conditions.
Witness Against Torture activists from the U.S. focused on Tariq Ba Odah’s life in Guantanamo when they set up their encampment, in late November, 2015, in Cuba, outside the U.S. naval base. Like Aaron, they feel great empathy for the people imprisoned in Guantanamo, along with responsibility to keep educating U.S. people about the plight of 107 prisoners still held there. The delegation demanded that the prison close. They reject a new plan being developed by the Obama administration which would move the Guantanamo prisoners to prisons in the U.S., some still to be held indefinitely without charge or trial.
“Simply moving Guantanamo is no solution,” says Helen Schietinger of Washington, D.C. “That would mean holding on to the barbaric practice of indefinite detention. Besides, the entire domestic system of “correctional’ institutions is a travesty, poisoned by racism. We need to overhaul the U.S. justice system, not add Guantanamo to it.”

Enmanuel Candelario, an artist from New York, spoke bluntly about the base itself, calling it “an unwelcome symbol of U.S. power, which houses a torture chamber.”

We can’t directly nourish Tariq Ba Odah or bring him the consolation and affection for which he must also be starving. But together we can invite people to slow down and think about their actual circumstances and relationships with supposed enemies. We can help dismantle the terrible Islamophobia and fear that keeps many people in the U.S. imprisoned in the reckless grip of war makers.
When Aaron arrives in the Afghan Peace Volunteer community, he will sit with the young volunteers as well as the child laborers who are part of the Borderfree Street Kids School. He’ll also connect with local artists. While here, he hopes to serve tea and converse with people in a variety of places.
The conversations will very likely stir up questions about the 220 Afghans who were imprisoned in Guantanamo, as well as Afghans detained in the ‘Afghan Guantanamo’, Bagram Prison. I asked friends in our community here what kinds of questions they hope might be raised. Here are two responses: “Prisoners of the U.S. military – are they people who can create and enjoy art?” “Do they love?”

Fourteen members of Witness Against Torture have been in Guantanamo province for 3 days now, vigiling in solidarity with the 107 men remaining at the US detention camp.

As the group left from Havana, they were moved to hear a solidarity statement given by Shaker Aamer, released from Guantanamo just weeks ago.  It reads:

I give thanks to my lord and then to all the good people all over the world who’ve worked so hard over the years for my release and to support justice. I’m grateful to Witness Against Torture for travelling so far and carrying a message of hope to my brothers in Cuba. I want my brothers to understand that everyone is working hard for their release and ask them to work together to help each other so that others can help them. No one in the world should accept what’s happening in this prison. Guantanamo has been built for one reason and that is to destroy human beings, mentally, physically and spiritually. I truly thank Witness Against Torture, Save Shaker and We Stand With Shaker for telling the whole world about the suffering of my brothers still there. Thank you to all and every one and every group and establishment who stands for justice. May Our Lord Allah, guide us all.

Action on the Ground

At dusk on Wednesday, we established camp at El Mirador – scenic grounds overlooking the base from a distance of 2-3 kilometers.  To close our first day, Peace Poet Frank Lopez led us in a Four Directions ceremony that came from the traditions of the Arawak peoples, who are indigenous to Cuba.

On Thursday, Thanksgiving Day, we faced the base directly and announced one-by-one our political, personal and spiritual intention in being there.  Each person’s words were followed by the somber singing of “Courage, Muslim Brother”:

You do not walk alone

We will walk with you

And sing your spirit home.

Anger, compassion, hope, and tears flowed during the two-hour ceremony.  Cuban visitors at the overlook observed the act, adding their humble support for a moving cause.  Many of the speakers referenced the years of demonstrations all over the world to close the base and the countless people who have participated in them.  Two of the intentions are shared at the end of this email.

To conclude the day, WAT performed a Thanksgiving ritual titled “Forced-Feeding, Not Feasting at Guantanamo.”  Twelve persons, all fasting for the day, sat at a table in front of empty plates to represent the terrible pain endured by hunger strikers, past and present, at Guantanamo.  At the head of the table, one WAT member dressed as a detained man sat in front of the terrible apparatus of forced feeding.  Forced-feeding continues to be used to wound the bodies and break the spirit of hunger-striking men.

The journey so far has generated powerful experiences, stories, images, and insights.  Some media have reported the trip and published WAT members’ reflections.  See:

Global allies have joined in acts of protest and solidarity.  Nearly 50 members of Code Pink, in Cuba for a conference opposing the presence of the US naval base in Guantanamo, fasted on Thanksgiving Day.  Members of We Stand with Shaker, which helped to bring Shaker Aamer from Guantanamo to the UK, held a vigil at the US embassy in London.

“We thank our families, who have made this important trip possible; the kindness of friends and allies, who have supported us with their solidarity efforts and well wishes; the Cuban people for their hospitality and to whom Guantanamo rightfully belongs, and the detained men themselves, who have inspired us with their courage.”

13 years, 7 months & counting. That’s how long Guantanamo bay has been used as a torture chamber for hundreds of men whose crime is being Muslim after 9-11. Currently, 107 men remain inside. Collectively, nearly 1500 years lost. That’s countless changes in seasons. That’s children being born and living full lives, over and over again for generations. That’s countless revolutions in human civilization.  I am sorry for those almost 1500 of life lost. I am sorry for the years I spent doubting if I could make a difference.

I’m here now in Guantanamo Bay to get painfully closer to one of the most heinous manifestations of anti-Muslim violence, a stain on humanity. As the men inside those cages are trapped in hellish conditions, I, as a Pakistani-American Muslim, am reminded that we are not meant to survive. This was a painful reality I had avoided for years since the War on Terror took full force because I had internalized a state sponsored fear mongering that made me work so hard to be the good Muslim or just not draw attention to myself as a Muslim. Looking at Guantanamo Bay with own eyes, I am confronted with a choice: will I allow myself to be trapped, too, or will I rise? Will I answer my Muslim brothers calls to struggle with them? The answer is very clearly yes because as more time goes by with metal bars secured with red, white and blue, I comply with my own oppression and am complicit in the destruction of my own brothers’.

A call to action is met with a thousand calls–to answer, to give up fear, to connect to a force more powerful than us. I am committed to continue answering this call and to work so others can hear it too.