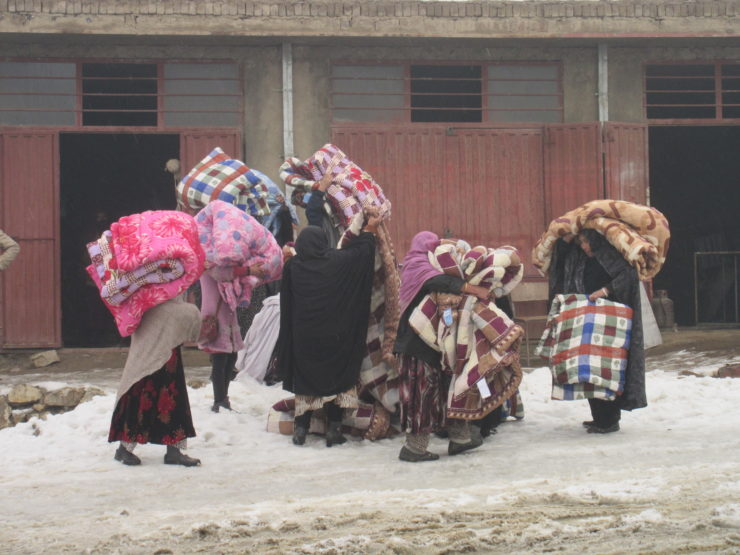 Updated January 2021
This is an archive page.  With the Dec 2020 closure of VCNV, we can no longer undertake to convey support to the worthy projects of the Afghan Peace Volunteers. The APVs continue their work at www.ourjourneytosmile.com, although when you read this, APV projects may have significantly altered.

The Duvet Project is an effort led by the Afghan Peace Volunteers that gives duvets to destitute families in Kabul.   It also gives women an opportunity to earn living wages for sewing duvets.  Funds for the project go towards the supplies and sewing of the duvets.

In the winter of 2019, the Afghan Peace Volunteers delivered 1500 duvets to about 750 needy families in Kabul. The Afghan Peace Volunteers continued to learn much as they conducted surveys of households before distributing the duvets. The duvets are needed especially by families who don’t have fuel to keep warm in winter. Burning plastic and other trash items have contributed to Kabul becoming one of the most polluted cities during winter over the past four years.”

Thanks to supporters, the Winter Duvet Project has been organized every winter since 2012, and a total of 21,000 duvets have been distributed.

On Purpose, in Kabul – Kathy Kelly

In Kabul, Widows and Orphans Move Up by Kathy Kelly

Why Not Warmth in Afghan Duvets? by Dr. Linda Sartor

There. Now You Are One of Us by John Dear

Dreaming of Duvets in Afghanistan by David Smith-Ferri

Survival and Dignity in an Afghan Winter by Kathy Kelly