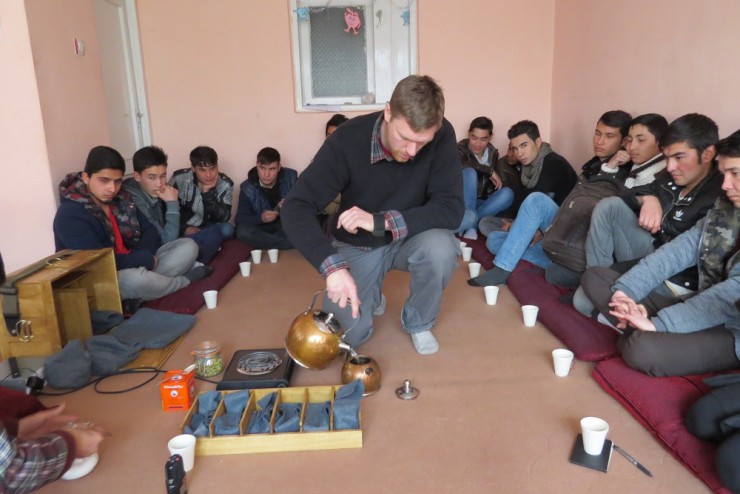 Here in Kabul, last week, at the Afghan Peace Volunteer (APV) community home that hosts me, I watched Abdulhai and visiting activist Aaron Hughes work out ways to secure the greenhouse which they had partially assembled that morning. Warmed by the effort and with the sun beaming down on all of us, they sat on the garden ledge in their shirtsleeves although it is a quite cold winter here, talking about the greenhouse perched on an uneven garden plot before them.

I had watched Aaron, Abdulhai, Ron and Hakim maneuver the partly assembled greenhouse from a neighbor’s storage area, over a fence, and onto the garden plot.  Aaron is 6 ft. 5 inches tall. His strength and height helped the process considerably.

Aaron and I first met in 2005, shortly after he returned from deployment to Iraq with the Illinois National Guard. The U.S. military had assigned him to drive trucks from Kuwaiti supply depots to Forward Operating Bases across Iraq.  At the end of his deployment, convinced he couldn’t endure another stint with the military, after seeing how futile, dehumanizing and destructive the U.S. occupation of Iraq had been, he took an option to come home, and decided, beyond committing to  work organizing with Iraq Veterans Against the War, to become an artist, to create beauty. At age 33, he feels plenty of energy both for artwork and antiwar organizing efforts.

Aaron came to Afghanistan to present a particular project, related to prisoners in Guantanamo, called “Tea,” and to join the Afghan Peace Volunteers in various efforts to teach and create art. His construction skills became a greatly needed bonus as the greenhouse took shape.

Every day has been filled with learning exchanges. Tea creates an occasion for community, for having conversations together. Aaron taught children at the Borderfree Center to make potato prints using halved potatoes and acrylic paint. Several teachers at the school have learned sketching and print making skills from him. And Aaron says he’s been learning, too.

Ali describes the plight of five “day laborers” the APVs have gotten to know. Their names are Mohammed Dawoud, Ali Reza, Jalaladeen, Mirajadeen, and Qurban. The men wait all day, at Pul-e-Surkh intersection, where a bridge spans a putrid, dried up riverbed, hoping for a single day’s work even if at days’ end they take home just two or three dollars. Many shiver outdoors for hours, unemployed and desperate.

Especially during winter months, when construction shuts down, work is scarce. If chosen to work for part or all of a day, a laborer has no choice but to settle for extremely low wages. Hundreds of other laborers would take the rate being offered, so there is no point in bargaining for more. Day laborers live in miserable homes, always at a loss for resources to feed their families. When hired for temporary work, it will likely involve hauling heavy materials all day, back straining labor which some project managers might not impose on animals, since the animals would be more expensive to replace.

The five have talked about their needs with APV members. Each dreams of acquiring a cart from which he could sell goods. Qurban would like to set up a tea serving cart and serve tea to laborers waiting for possible work. The equipment would give them a small measure of independence.  The APVs try to learn about micro-loans and possibilities for offering limited assistance.

Most afternoons during Aaron’s visit, a team of Afghan Peace Volunteers would return from visits to families living on nearby mountainsides, surveying for families most in need of help from  “The Duvet Project,” the APV’s program hiring local seamstresses to make 3,000 heavy blankets for distribution, free of charge, to impoverished families,  or assistance through  the “Borderfree Center Street Kids’ School”, supplemental schooling for child street vendors with community support for their families making it possible for the children to attend schools in Kabul. The school’s name is inspired by a call for a border-free world issued by U.S. professor Noam Chomsky – throughout the world, working to build community with impoverished people seems necessary to keeping ourselves honest and dedicated in a struggle against war. Decades of war have brought the people of Kabul to the place where they are now. The APVs call for an Afghanistan undivided by ethnic hostilities and external intrusions, with hard work on their neighbors’ behalf. And they also simply want to help.

The young people exude health and vigor, warming themselves at a wood-burning stove after the long hikes up the slopes. Ali flopped down on a mat, one day, leaning back with legs crossed, and described a man he had met whose wife could not bear him a child, and so the man adopted a child left by parents at a mosque. The child, at age three, could not walk and there was no hope of obtaining whatever treatment might have been available in a rich country or one not at war. At age 18, living as a shut-in with his parents, the child can communicate with no-one but his adoptive father. Meanwhile no-one in the family can find work.

In another home, a woman doesn’t have work and her husband cannot walk. She was away from home when Ali stopped by – when asked, the children said she has work in the nearby mosque, but Ali believes the woman may be obtaining money by begging. Living on a mountainside, in primitive homes a long way from drinking water, lacking income and caring for loved ones unable to walk seems unbearably challenging.

As APVs learn the stories of families they visit, relationships grow. “I was out running early one morning,” said Abdulhai, “and I heard a woman begging. I couldn’t see her under her burqa, but I recognized her voice and stopped.” “Aren’t you Habib’s grandmother?” he had politely asked.  The Afghan Peace Volunteers have been encouraging Habib to not only be part of the Borderfree Center Street Kids School, but also to join five older street kids who will begin learning how to organize the duvet production and distribution.

The young volunteers find their lives touched and shaped by ongoing challenges in these stories, especially since some of the stories are similar to their own experiences growing up during Afghanistan’s civil war and often being without food and blankets in their own homes.

Hoor, for instance, faces challenges from teachers, friends and relatives, who question the generous choices he makes. Hoor has been earning small sums of money as a researcher for a project sponsored by an American university. When he is paid, he first goes to a sprawling refugee camp where he has gotten to know one of the neediest families. He gives a portion of his earnings to this family, even though his own family depends very much on his income.

On Aaron’s final day with us here in Kabul, he and the APVs were putting finishing touches on the greenhouse and getting ready to plant cucumber seeds. The Dari term for a greenhouse literally translates as “flower house.” Aaron will entrust to the APVs twenty plaster cast cups, decorated with flowers, each bearing the name of an Afghan citizen who lived in Guantanamo Prison. Each vessel is a testament to the withering effects of war and the crushing realities faced by detainees living under tortuous conditions. You could say the economy here is another such imprisoning consequence of war, of great-power ambitions, played out over many decades, in bloodshed and greed.

The path out of war seems to involve creating peace where we can, in earnest community with people whose basic needs aren’t met. As the APVs put it, it involves creating a green and equal world, acting conscientiously to abolish war.

Aaron helps build a “flower house” to shelter new seeds. He forges links with people who might otherwise be forgotten, and urges us to sit down with each other and talk. These are small seeds, and we shelter and nurture them in our hope to find future generations ready to abandon the violence of economic and environmental exploitation, –young people convinced that war is futile, whose empathy for neighbors in need steadies and energizes them.