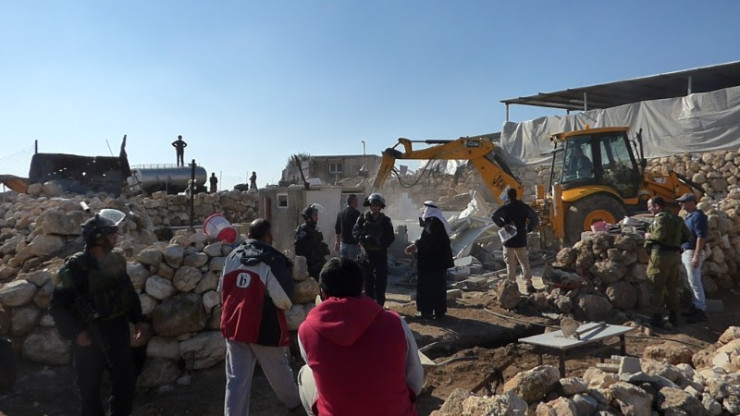 After a breakdown in mediation between the State of Israel and the Palestinian villages of Massafer Yatta, Israeli authorities destroyed 24 homes in the South Hebron Hills. The homes lie within an area which Israel claims as Firing Zone 918, in which approximately 1000 Palestinian civilians live in 8 villages.

Early on the morning of February 2nd, 2016, Israeli soldiers closed access to Firing Zone 918 and placed checkpoints near the Palestinian villages of Bir al Idd and Al Fakheit. In the village of Jinba, Israeli soldiers and border police demolished 15 houses. They also fired sound grenades and teargas. Several solar electric panels were confiscated by the Israeli civil administration.  In nearby Halaweh village Israeli forces destroyed another 9 houses, bringing the total to 24. Israeli police confiscated a car used by international volunteers and Palestinian activists.

Residents of Massafer Yatta live inside Firing Zone 918. They have refused to leave their land and have been engaged in court ordered mediation for several years. The Israeli military has issued demolition orders for the region’s clinic and two primary schools, as well as the villagers’ homes, mosques, agricultural buildings and wells. The families depend on the land for their way of life. Because they primarily subsist through dry land agriculture and the grazing of sheep and goats, relocation is economically impossible.

The families are living in the midst of military exercises. Soldiers enter homes, occupy villages, and prevent shepherds from grazing their sheep and goats. Israeli helicopters hover above schools, homes and grazing sheep. Soldiers drive across cultivated fields and gardens in huge destructive military vehicles and fire across the fields where children walk to school. Both soldiers and settlers frequently damage the minimal track which provides the only motorized access to the area, and residents are unable to obtain permission to maintain or improve the road, making access to schools, health care and commerce difficult and often dangerous. Shepherds face frequent intimidation and violence from settlers in nearby settlements and illegal outposts. Yet they have no meaningful legal recourse.

Damning evidence of the housing demolition and theft can be viewed in the link below.

Cassandra Dixon lives at Mary House of Hospitality, a small catholic worker house which offers hospitality to families visiting the federal prison at Oxford, WI, and she works as a carpenter in Madison, WI.