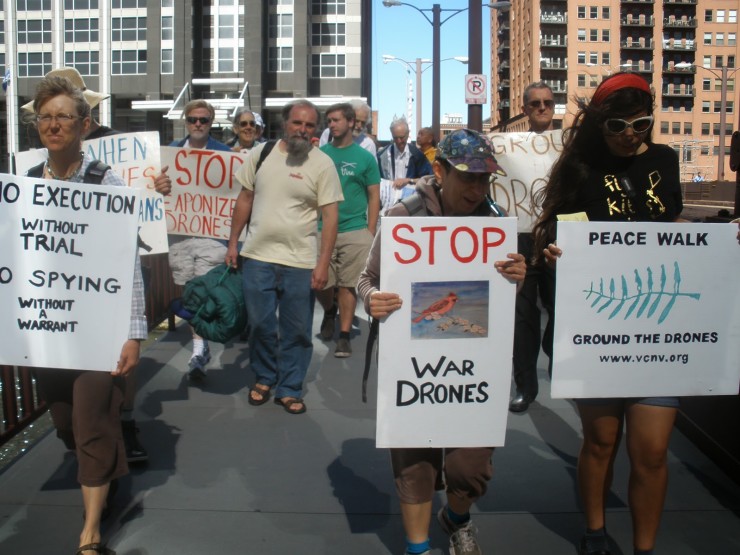 Frank Pauc has participated in two long walks with Voices for Creative Nonviolence in protest of drone warfare. The essay below is about an experience he had while organizing a presentation about his recent book.
“Do you cause trouble when you visit the Sikh temple?”
That was a question from a detective of the Oak Creek Police Department.
I answered, “No”, and I told him that I often go to the temple to sit and pray. I also mentioned to the detective that I had written a letter to the editor of the Milwaukee Journal Sentinel right after the shooting at the Sikh temple.
He asked, “In your letter were you defending the white guy (the shooter)?
There was an awkward pause.
Then I said, “Nooooooo…in the letter I wrote that the killings had hurt our entire community.”
The policeman replied, “Oh, okay, good.”
At this point, you may be wondering why I was having this odd conversation with a member of the Oak Creek police force. I was wondering the same thing while I was talking with the detective. It all had to do with a book signing at the Islamic Resource Center ,a son with PTSD, and a visit to the Sikh temple. The story goes like this:
A year ago I published a book about my son’s experiences in the Iraq War. Our son, Hans, came back with PTSD and deep animosity toward Muslims, and anybody who might even look Muslim. It occurred to me that Hans may not be the only veteran returning home with an intense feeling of discomfort when dealing with people who look like they might be from the Middle East. Since I know some people at the Islamic Resource Center (IRC), I asked them if I could talk about my book, and use that to start up a discussion about veterans’ issues and how they affect the Muslim community. It also occurred to me, after talking with my son, that other people, like the Sikhs, might be included in this conversation. To be honest, it is difficult for Hans (and perhaps for his fellow vets) to notice distinctions between the two religious groups.
I went to the Sikh temple in Oak Creek about two weeks ago. I go there often to pray and meditate. I seldom talk to people there, but a few of them know me by sight. The last time I went there, I took along a copy of my book and a handwritten note inviting people to my upcoming book signing at the IRC. I spoke with the president of the temple, and he said that they would discuss my book at the next meeting of their council. Within a couple days, I got a call from a member of the Sikh temple, saying that a few Sikhs would be showing up at my talk. Cool.
The morning before the talk, I found a note on our front door from the Oak Creek detective asking to call him. I did. He wanted to talk to me about the book signing. I invited the detective to our house to discuss the book. He arrived with a uniformed policeman, and they both sat around my kitchen table for better than half an hour.
Apparently, somebody from the Sikh temple had forwarded a copy of my handwritten note to the local police, asking them to investigate me. And so they did. I spent time explaining to the detective and his sidekick about my son’s wartime experiences, and I told him about my relationship with people at the IRC and the Sikh temple. He eventually decided that I wasn’t really a white supremacist, and he wished me luck with my book signing. He did in fact check out all my statements with both the Islamic Resource Center and the Sikh temple. That’s his job. Overall, it was a friendly and relaxed interrogation. Nonetheless, it felt surreal.
Was anyone in the wrong? I don’t think so. The person at the Sikh temple who wanted the cops to investigate me had good reason to be cautious. They have had violence there. The detective was just doing his job to maintain public safety. However, I feel profoundly sad.
This whole episode demonstrates to me that our society has utterly lost any sense of trust. I was trying to bring divergent groups together to discuss what I considered to be a common problem. I wasn’t out to protest and savage anybody. My hope was that, through the book talk, I could create peace. However, the fear that currently overwhelms our nation caused me to be the object of a police investigation. What have we become? What does this mean to the Christian community?
As Christians, we ought to give others the benefit of the doubt. We can’t assume, without any evidence, that others are our enemies. Yet that is what we do on a daily basis. How many of us hate and fear Muslims, without ever having met one? Do any of us fear Sikhs? Are we content to stay within our tribe, and never bother to meet somebody who looks different or talks different?
This particular story ends well. I had a good turn out at the book talk. It was an eclectic group. There were several Muslims, two Sikhs, a few Catholics, an employee from the VA, and a Buddhist. We had a dialogue that was civil, animated, and quite interesting. People left the meeting with new thoughts, and a couple of my books.
We don’t have to live in fear. We can reach out. We can see Christ in those around us. It can be done.
Francis (Frank) Pauc is a graduate of West Point, Class of 1980. He served as an officer for six years after receiving his commission, five of those as a helicopter pilot. After he met his wife in Germany, he had a gradual change of heart about the military that led him to become a pacifist.