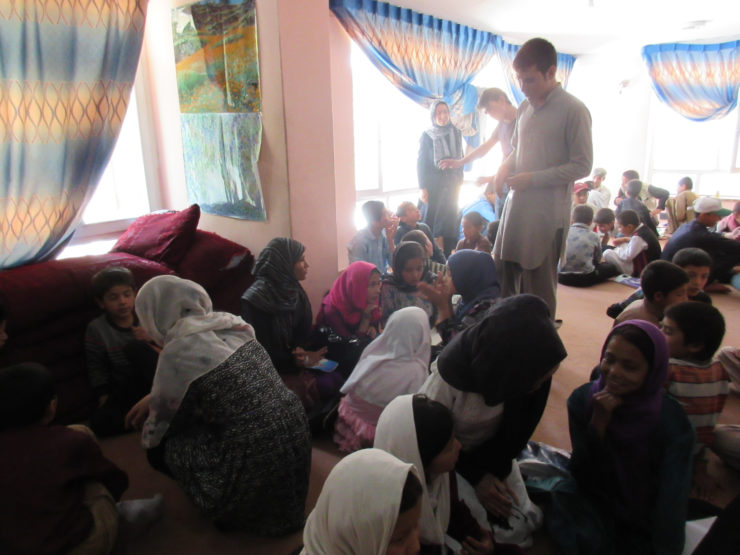 In the Absence of Peace

i held an atlas in my lap

ran my fingers across the whole world

where does it hurt?

Do you believe that there are children as young as ten who think and learn about nonviolence and desire to shelter you from the grief and suffering of war…in Afghanistan?

Come hear the stories of the Afghan Peace Volunteers. They understand that they may never see the end of war; they tell me that they do not believe that there can be peace or that they believe in peace, since they have never lived without war.

Then why do this great and arduous work? Their answer, “We have not lost hope.” Later that afternoon, I was relating these conversations to Hakim, who has had countless conversations about this, he shared the question he asked the group, “…then what should we do, how should we conduct our lives in the absence of peace?”

The Borderfree Center is their answer of hope in action. A safe haven of twenty teams involved in permaculture, trainings on leadership, volunteerism, Dari, math, classes about green spaces, sustainability and how to care for the earth, equity and equality between people and nations, and nonviolence concepts, practices and influential people of nonviolent movements. The facilitators are as young as 13 years old, and yes, she is a girl, Muqadisa.

I sit here in Kabul at the Borderfree Center reminding myself to breathe and blink. I am in awe.

Zuhal shows a PowerPoint of photo after photo: famine, mutated humans, drone attacks and nuclear bombs and the shape they leave on human bodies, lives and the earth. She stops, stutters and cries in front of the group. Zuhal was affected by the Kunduz Hospital attack. There is not a human in the room outside of me that has not been affected by war.

The APVs know that the past is not easily brushed away like the naan (bread) crumbs after every meal. It is the ingredient that connects us to each other and to the planet. The more we try to separate ourselves from the past the more the past conspires to bring us back to each other. They are using the past as a teacher and a guide to lead lives that cultivate and benefit the earth and all living beings.