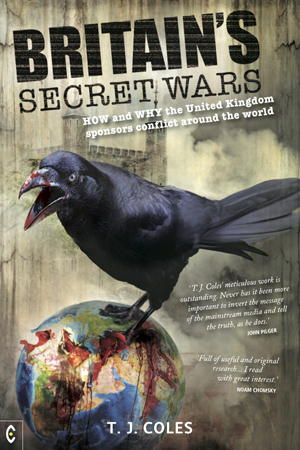 Tim Coles, in his Britain’s Secret Wars:  How and Why the United Kingdom Sponsors Conflicts around the World, has revealed both the motivation and the military strategies of governments conducting illegal, clandestine warfare.  The governments include both the U.K. and the United States, with some participation by Israel.  Coles has provided a convincing case for  secret interventions into ten different countries, in order to ensure the profit-making opportunities of major corporations, especially those in the energy field.  In addition, manufacturers of weapons always profit from continued warfare around the world.
For example, when Iran nationalized its oil industry, U.S. and European Union corporations were unable to profit from the rich stores of Iranian oil.  Iran then became a target for clandestine operations by MI6 and the CIA.
When nations become weakened by prolonged internal conflicts and assaults from terrorist groups, U.S. and E.U. corporations can then establish themselves and exploit that nation’s resources.  In many cases, according to Coles’ research, MI6 and the CIA actually provided training and weapons to militants who were then labelled by the corporate media as “terrorists.”
Coles provides information from reliable sources, including Great Britain’s government documents.  His work is meticulous in detail, but still allows the reader to see the big picture of the strategy known in the U.S. as “Full Spectrum Dominance.”  The doctrine of “full spectrum dominance” aims to establish military superiority over “land, sea, air, space and information” by the year 2020.  In the year 2000, the Project for the New American Century stated the use of armed drones “will allow not only for long-range power projection but for sustained power projection.”  Members of the Project soon joined the George W. Bush Administration, and began to implement “full spectrum dominance” with wars in Afghanistan and Iraq.
These clandestine operations by the U.K. and U.S. governments must remain secret because most tax-paying citizens would never approve of killing people in order to ensure corporate profits.  Information flows from government and military sources directly to the corporate media, and most of us believe what we read in the news.  It is only brave independent journalists and researchers like Tim Coles who find the startling truth that we tax-paying citizens are unwittingly sponsoring illegal violence that has killed millions of innocent people and destroyed the infrastructure of many nations.
If all taxpaying citizens read Britain’s Secret Wars, we would be able to hold our governments accountable and take one giant step toward peace and justice in our world.
Cindy Stahler volunteers with Voices for Creative Nonviolence, a Chicago based campaign to challenge military and economic warfare.  She is a retired ordained minister in the United Church of Christ, and also worked for ten years in the field of educational research.  She is now a grandmother of six, and works to create a sustainable world for her grandchildren.