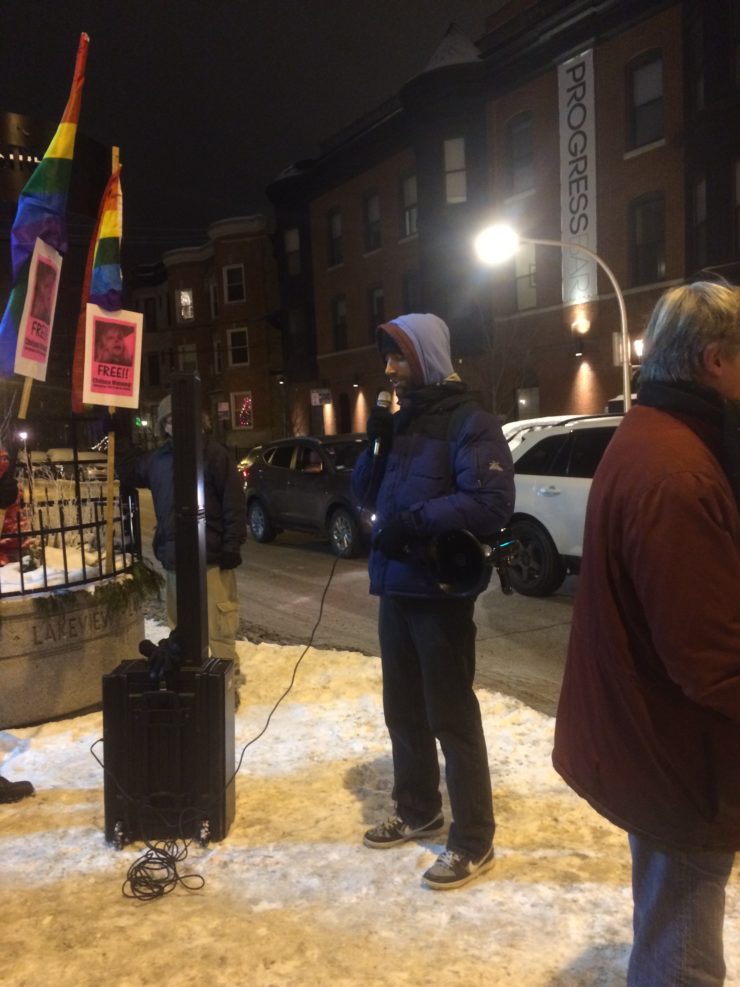 Laughter, songs, tears and heartfelt appreciation marked a farewell party for Buddy Bell who will move to Pasadena, CA at the end of December.  In the colorful lower level of the Wellington Avenue United Church of Christ, sitting around circular tables, people reminisced about how they first met Buddy and what his work and witness have meant to them.  Buddy told us that he had left his job and a reliable income to help Voices organize a walk in the summer of 2012. He hadn’t anticipated working and living at Voices for the next five years.  Brian, Sabia and Kathy agreed that living and working with Buddy has been immeasurably rewarding.  Chris Inserra, who directs the choir at Wellington, assured all of us that Buddy will return April 1st to sing in Pueblo Canta, the spring concert.

After his appreciation party Buddy attended and spoke at a Chelsea Manning demonstration. Below is his speech.

“We really need him [President Obama] to pardon Chelsea Manning, and while he’s at it, to pardon a lot of other people. There are plenty of whistle-blowers as has been mentioned, plenty of people in jail for non-violent offenses, in jail for immigration offenses.

“But just to get back to Chelsea, I have worked with a group called Voices for Creative Non-Violence for five years, and among other things, they are a group that investigates about the Iraq War, and Chelsea was in Iraq, and she saw what was going on after the U.S. overthrew the Saddam Hussein government and helped the Shi’ite government come to power, which then in itself was oppressing the Sunni minority.