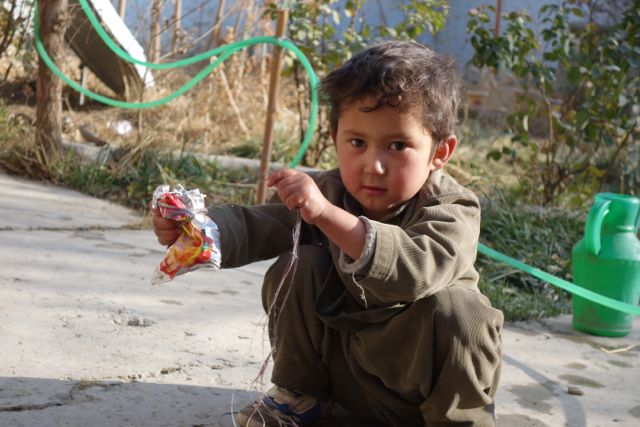 Ghulam Reza often plays at the Borderfree Centre. He’s 5 years, 3 mos. On Saturday he was filling an empty chips bag with water,  tying off the top, and pushing it along, atop a roof tile. Zarghuna and I tried asking if it was a ship or a truck, but he generally ignored us and kept on playing quietly. 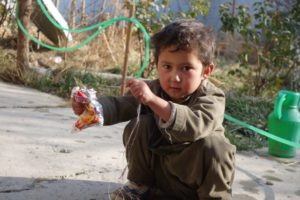 Caption: Ghulam Reza makes a toy for himself

Near a boys’ school in the Karte Sakhi neighborhood, Najiba leads us through the wooden gate to her family’s home. A store of coal is stored in one corner of the courtyard, coal for other families.

Najiba’s older neighbor Fatima comes outside to greet us and leads us to her small room. Carpets cover the floor. The sun has warmed the room, but still Fatima turns on the small propane heater. The heater is started clearly for her guests. 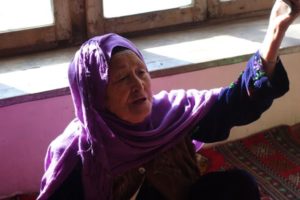 Caption: Fatima shows her wrist, made raw from washing

Zekerullah and Hakim, both Afghan Peace Volunteers (APVs), have come to conduct a home survey for potential duvet sewers. Zekerullah opens his notebook to find the survey questions printed on loose papers tucked inside. He asks Fatima and Najiba where they have come from, the family’s ethnic group, the cost of rent, how many live in the home and who is working. Najiba turns her hands palm-side up so that we can see how washing clothes to earn money has damaged her skin, reddening her wrists. 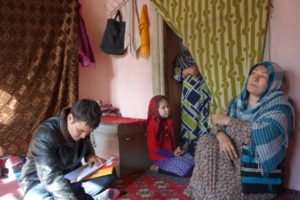 Later I ask Zekerullah if any of the families we visited would be considered most in need and given the sewing work. Zekerullah says if he were to choose, it would be Najiba. When an Afghan woman is working outside the home, he explains, it is a sign that the family circumstances are especially difficult.

Another APV Hadisa told me today that she felt women like Najiba were “heroes for their daughters.” They work hard to provide for their children. They are powerful women.

Marzia didn’t have breakfast this morning and stayed home from work because she felt sick. She met the home survey team outside the Masjib Safit mosque. As Maryam, one member of the team, said, the streets are like a puzzle. The narrow alleys, wide enough only for foot traffic or a cart, have so many turns and no numbers or names that without Marzia as our guide, we would never find her home.

Marzia earns money for her four children by cleaning other people’s houses and by sewing women’s scarves. But it is not enough money. The room rent is 2,000 Afghanis (Afs. ) a month and she can’t afford it.

Sometimes the owner of the room she rents gives her leftover food. When I heard this, I thought it was good that the food wasn’t wasted, that instead it was shared, but Qasim, another Afghan Peace Volunteer, thought receiving leftovers wasn’t good. It’s leftovers, he said, emphasizing the last word.

Marzia burns discarded clothing as fuel in a small stove. The clothes come from the people she works for.

The survey team sat with Marzia and her sister Hadisa together. Both of their husbands are dead. Hadisa’s husband died from an illness. Marzia’s husband was killed when he fell into a well. 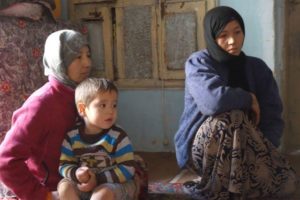 Before going to school in the morning, Shazad, age 10, used get up early to work at a bakery, carrying flour and doing other small tasks. From there he’d go to school from 8 until10 a.m., then to the madrasa, and afterwards, back to work at the bakery. Now he sells onions from a wheelbarrow near the Maiwan Hospital in Nowabat. They sell for a little less than 50 Afs. and sometimes that’s all he earns in a day. That’s less than $1 US. Other days he might earn 200 Afs. Shazad describes the work as fun because he likes calling out to people to buy his onions. He says he likes earning money, too.

His brothers and father also work, his brothers selling soup and his father, popcorn.

Shazad has been studying at the Street Kids School for almost a year, learning about the school from his friend and classmate Sahel.

During yesterday’s class, he was the first to volunteer to read a paragraph aloud containing several words with the letter ظ. He and his classmates lowered one arm, then the other, as if they were marching, as they broke down the words into syllables.

Before leaving the classroom, Shazad said that he dreams of becoming a police officer. He wants to help secure his country.

caption: Shazad sits on a window school at the Borderfree Center where he studies at the Street Kids School

Fatima is 12. She started studying at the Street Kids School three years ago. At that time, she was selling plastic shopping bags. Now she works in other people’s homes, washing clothes and dishes and sweeping the floor. She works by herself from 7 a.m. until the afternoon. Her mother does the same work but in different people’s houses. Fatima says she is not afraid to work alone. She says that her work is important because it is how she can help provide halal food to her family.

While Fatima and her mother work outside the home, Fatima’s older sister stays home to do the household chores and to care for her four youngest siblings.

Sometimes during class Fatima seems distracted. Her teacher, Mahtab, will call her name to regain her attention. When copying a Dari lesson, she stops halfway through and seems surprised when Mahtab points out that it is not complete. I wonder where her mind goes. 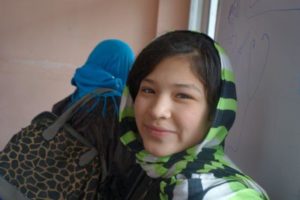 Fatima tells me through Mahtab that she likes studying math and Dari. She hopes she can become a useful person in the future. Her first choice is to become a doctor, her second choice, a lawyer. Either way, her hope is to help her mother.

Carolyn Coe has been a guest of the Afghan Peace Volunteers, in Kabul (www.ourjourneytosmile.com) and contributes to the Voices for Creative Nonviolence website (www.vcnv.org)