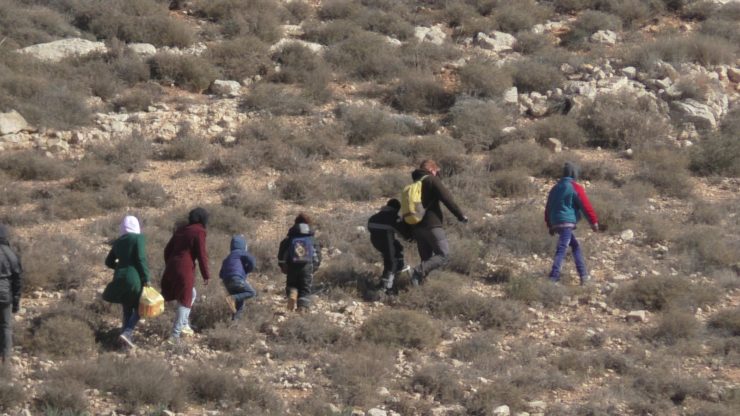 Our friend Cassandra Dixon, from the Mary House of Hospitality Catholic Worker in Oxford, Wisconsin, is in Palestine; and forwards us this report as a model of steadfast, undiscouraged resistance. She writes:

It is absolutely bizarre to be watching Trump’s policies of hatred unfold from inside Palestine — here where ANY traveler or foreigner finds herself overwhelmed by kindness and hospitality. If we find ourselves at a loss to imagine resisting over the long haul we should take courage from these schoolchildren who for the past THIRTEEN YEARS have required a military escort in order to reach their school safely in the face of settler violence and intimidation. We have a long long road ahead!
Thank you so much for helping me to spend this time working here — and for all your efforts to stop the madness in the US!!!

The second semester of school has just started for these children, and Operation Dove has compiled the following report of the challenges faced by the children during the first semester. 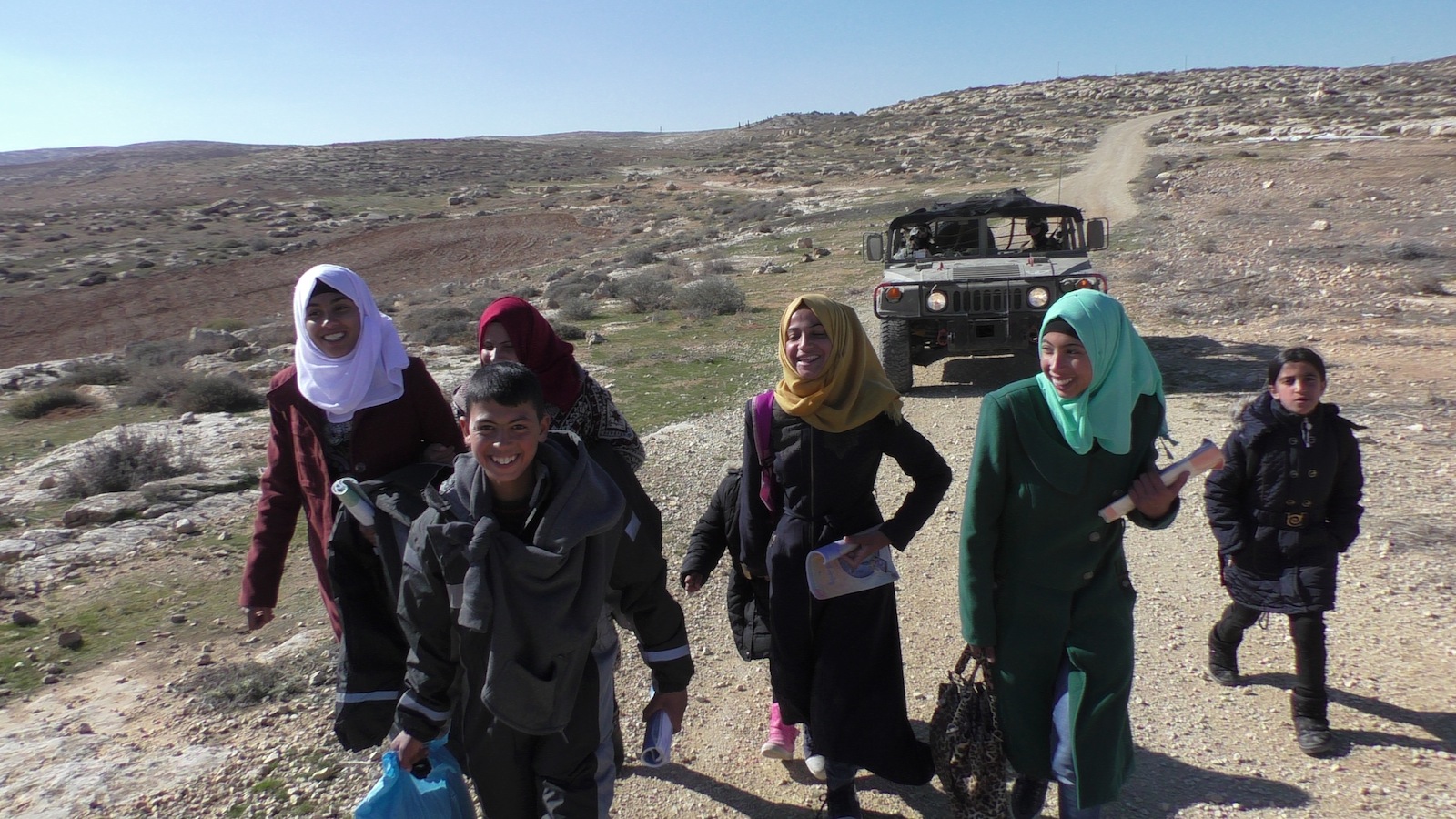 Children from the Palestinian villages of Tuba and Maghayir Al-Abeed began the first semester of the 2016-17 school year with Israeli soldiers escorting them to their school in the nearby Palestinian village of At-Tuwani. This is the thirteenth continuous year that these children have needed a military escort in order to walk to school safely.

To get to school the children must walk along a road which once provided easy travel between the villages, but which now runs between the Israeli settlement of Ma’on and the illegal outpost of Havat Ma’on. For the past thirteen years violent behavior by settlers from the outpost, the existence of which is illegal under both Israeli and International law, has made the road inaccessible to Palestinians. Even escorted by Israeli soldiers the schoolchildren continue to face the possibility of violence, harassment and intimidation as they walk to and from school.

During the first semester of the 2016-2017 school year an average of eight children between the ages of six and 16 walked with a military escort to and from school in the Palestinian village of At- Tuwani. Under Israeli Knesset Committee for Children’s Rights order, the military escort is responsible for protecting the children from settler violence and intimidation throughout their walk to school in the morning, and their return trip home in the afternoon.

Operation Dove volunteers documented multiple instances in which the military escort failed to provide protection to the children, leaving them vulnerable to settler violence on many occasions during the first semester of the 2016-2017 school year.

Even with a military escort the walk between home and school remains difficult for the children of Tuba and Maghyir al Abeed. During the first semester of the 2016-17 school year the escort arrived late 23 times (in the morning) out of a total of 88 monitored school days. As a result the children missed a total of 7 hours of school (441 minutes).

Operation Dove volunteers reported an even greater incidence of late arrival by the escort in the afternoon, forcing the children to arrive home late and to lose their free time waiting. On 33 out of 88 school days (37%) the children were forced to wait in At- Tuwani after school for the arrival of the escort. During the first semester they waited for a total of more than 27 hours (1630 minutes).

The meeting points with the military escort, for both the morning and the afternoon walk, are very close to the illegal outpost of Havat Ma’on, and as a result, when the escort is late, the children must wait where they are vulnerable to settler violence and harassment. During the first semester of the 2016-17 school year the children waited for the escort at these dangerous meeting points for a total of 35 hours.

During the first semester the military escort failed to arrive on four occasions, once in the morning and three times in the afternoon. These incidents constitute extremely serious failures on the part of the escort to adequately protect the children. The children cannot use the road without the presence of the soldiers, due to the danger of settler attacks. In previous years, when the escort has failed to arrive, the children used an alternative footpath which runs around the outside of the illegal outpost of Havat Ma’on. However settlers from the illegal outpost have now built a new structure near the path, some distance from the outpost, making this path nearly impassable. The presence of this structure and an increased level of settler violence and intimidation of Palestinians using this path has made it too dangerous for the children, and as a result they must now take a much longer route between school and home if the soldiers fail to arrive. This longer path takes between 45 minutes and one hour, and is extremely difficult, especially for the youngest children. Even on this longer path the children are vulnerable to violence and harassment from settlers. During the first semester the children used this longer route on three of the four occasions on which the escort failed to meet them.

In one case the escort failed to meet the children after school because the soldiers did not know the location of the meeting point, which has been unchanged for thirteen years. The schoolchildren began to take the longer route, even though it is also dangerous for them if they are unaccompanied. They found the soldiers on the path and reached the village of Tuba safely, escorted by Israeli soldiers under strong pressure of Operation Dove volunteers.

In all four of these cases the Israeli soldiers gave no reasonable explanation for their failure to meet the children, either to Operation Dove volunteers or to the children themselves.

Even when the military escort does arrive, the soldiers often fail to provide adequate protection to the children.

Operation Dove volunteers also reported another extremely serious failure of the military escort during the first semester: On 27 October the soldiers who were escorting the children threw rocks towards the schoolchildren they are charged with protecting, and carried a slingshot, which is illegal for them to use or possess.

On three occasions during the first semester of the 2016-17 school year settlers used violence against the children during their journey to and from school.

As a result the children’s right to freedom of movement is doubly denied: They cannot safely use the road which leads most directly to their school without the presence of Israeli soldiers to protect them, and if these soldiers fail to arrive the children are unable to use the alternative path because of the presence of settlers who threaten, harass and attempt to intimidate them, and who have blocked the path with an illegal structure.

In September, 2016, two college-aged boys from the Palestinian village of Tuba began attending university in the Palestinian city of Hebron. The shortest route to the University is the same road used by the schoolchildren to reach their school in At-Tuwani.

Even when their university schedule allows them to walk with the military escort their right to freedom of movement is not guaranteed.

On December 6 two Israeli soldiers who were escorting the schoolchildren who attend school in At-Tuwani refused to also escort one Palestinian boy who was coming back from the university in Hebron to his home in the Palestinian village of Tuba. The soldiers refused to explain their actions to the student, to Operation Dove volunteers, and the lawyer of the student. After one half hour the soldiers agreed to escort the university student along with the rest of the schoolchildren, but mid-way along the road they stopped the entire group to check the ID of the university student again, forcing the entire group to wait for 15 minutes in a dangerous place very close to the illegal Israeli outpost of Havat Ma’on.

Settler violence and the failure of the Israeli military escort combine to deny students from Tuba and Maghayir al Abeed thier basic right to Freedom of Movement and to Education, especially in violation of art. 2-19-28-38 of the Convention on the Rights of the Child (CRC).

Having regard to the overall context described above, Operation Dove denounces Israeli army negligence during the escort and condemns Israeli settlers violence against children and International volunteers. Highlighting the collected data it’s clear the presence of the military escort is not a permanent and efficient solution for the protection of students from neighboring Palestinian villages, nor a deterrent against settler violence. This form of protection needs a real review, an action which should involve all local realities suffering from Israeli occupation.