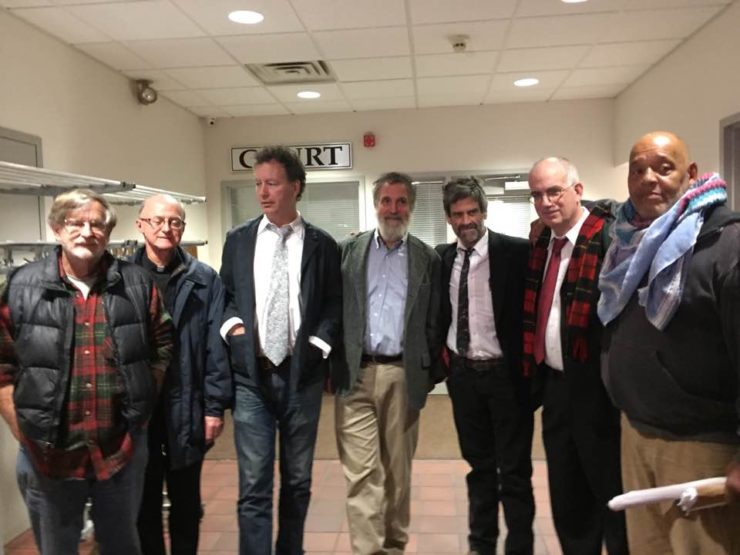 On March 19, 2015 on the 12th anniversary of the U.S. invasion of Iraq, seven members of the Upstate Drone Action Coalition were arrested at Hancock Air Base outside Syracuse, New York. They were nonviolently protesting Hancock’s lethal and illegal use of MQ9 Reaper drones over Afghanistan and elsewhere.

Five of the seven are charged with Obstructing Governmental Administration (a misdemeanor requiring a jury and carrying a maximum one-year sentence), trespass, and two counts of disorderly conduct. They are being tried in Judge David Gideon’s DeWitt Town Court [5400 Butternut Drive, East Syracuse]:

Originally scheduled for trial in late November 2016, the trial was postponed until February so a new jury pool could be called in order to assure a “jury of his peers” to Ricks, a Black Muslim.  Defendant Daniel Burns stated: “Drone warfare kills many innocents, including children. As a father of three beautiful children, I’m morally obligated to try and stop drone warfare. People of conscience must do everything in our power to stop such violations of human rights and international law.”###

One thought on “FOR IMMEDIATE RELEASE”