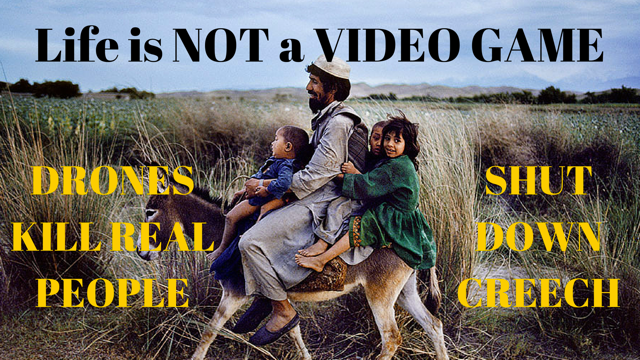 Obama’s Tragic Legacy and a Blunt and Homicidal Weapon Handed to His Successor!

Join Voices for Creative Nonviolence, CODEPINK, Veterans For Peace, Nevada Desert Experience and other activists at Creech Air Force Base, Indian Springs, Nevada for a 3rd national mobilization of nonviolent resistance to shut down killer drone operations in Afghanistan, Syria, Iraq, Pakistan, Yemen, Somalia and everywhere. In 2005, Creech Air Force Base secretly became the first U.S. base in the country to carry out illegal, remotely controlled assassinations using the MQ-1 Predator drones, and in 2006, the more advanced Reaper drones were added to its arsenal.  Creech drone personnel sit behind computers in the desert north of Las Vegas and kill “suspects” thousands of miles away.  In 2014, it was leaked that the CIA’s criminal drone assassination program, officially a separate operation from the Air Force’s, has been piloted all along by Creech’s super-secret Squadron 17.  Creech is where the drone killing started, it will be where we end it!

Each of the last two years, nearly 150 activists joined us from 20 different states across the country, including over 50 veterans. In a series of imaginative nonviolent direct actions, we were able to interrupt business as usual, with dozens of activists ultimately arrested. At this crucial point in history, help make SHUT DOWN CREECH 2017 an even more powerful stance against illegal drone killing. Please join us, and help spread the word.

We will be camping in the desert across the highway from the base and will hold vigils at its gates daily, April 23-29 during rush hour commute: 6:00-8:00 am and 3:00 – 5:00 pm. Participants who can only join part of the week are urged to participate Tuesday through Thursday, April 25-27, when we hope to have the largest resistance….mass mobilization.

For more information, donate funds or to register: