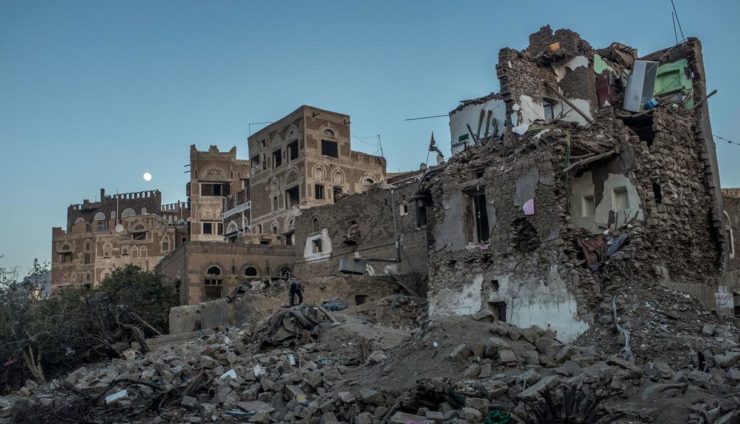 In one of the burnt-out shells of the shops where raisins, nuts, fabrics, incense and stone pots were traded for hundreds of years, all that was to be found was a box of coke bottles, a sofa and a child nailing wooden sticks together.

This is Sa’ada, ground zero of the 20-month Saudi campaign in Yemen, a largely forgotten conflict that has killed more than 10,000, uprooted 3 million and left more than half the country short of food, many on the brink of starvation.

Yemen stands as the worst-threatened of four countries where impending famine conditions have been said to comprise the single-worst humanitarian crisis since the founding of the U.N.  On May 2nd, 2017, the UN Office for the Coordination of Humanitarian Affairs published a grim infographic detailing conditions in Yemen where 17 million Yemenis — or around 60 percent of the population — are unable to access food.  The U.S. and its allies continue to bomb Yemen.

Jan Egeland, who heads the Norwegian Refugee Council (NRC), says that seven million Yemeni people are on the brink of famine. “I am shocked to my bones,” said Egeland, following a five day visit to Yemen. “The world is letting some 7 million men, women and children slowly but surely be engulfed…” Egeland blames this catastrophe on “men with guns and power in regional and international capitals who undermine every effort to avert an entirely preventable famine, as well as the collapse of health and educational services for millions of children.” Egeland and the NRC call on all parties to the conflict, including Saudi Arabia, the United Arab Emirates, Iran, the U.S. and the U.K. to negotiate a cease fire.

This weekend, the situation stands poised to become dramatically worse with the apparently imminent bombing, by Saudi Arabia, one of the U.S.’ closest allies, of the aid lifeline which is the port of Hodeida.

Egeland stresses the vital importance of keeping humanitarian aid flowing through Hodeida, a port which stands mere days or hours from destruction. “The Saudi-led, Western-backed military coalition has threatened to attack the port,” said Egeland, “which would likely destroy it and cut supplies to millions of hungry civilians.”  U.S. congress people demanding a stay on destruction of the port have as yet won no concessions from the Saudi or U.S governments.

The U.S. Government has as yet sounded no note of particular urgency about ending or suspending the conflict, nor has its close ally in the Saudi dictatorship.  Saudi Arabia’s Defense Minister, Prince Mohammed bin Salman recently gave “a positive view of the war in Yemen.” (New York Times, May 2, 2017). He believes that Saudi forces could quickly uproot the Houthi rebels, but rather than endanger Saudi troops he says “the coalition is waiting for the rebels to tire out.”

Even if Hodeida is spared, reduced import levels of food and fuel from the Saudi-imposed naval blockade puts the price of desperately needed essentials beyond the reach of the poorest.  Meanwhile prolonged conflict, dragged out by a regime that feels “time is on its side” and punctuated by deadly airstrikes, has displaced the needy to those areas where food insecurity is the highest.

Refugees from three North African countries where conflict is also threatening to impose terrible famine have Yemen on their route to escaping the continent, so they have fled conflict and famine only to be trapped in the worst of this dreadful year’s arriving tragedies.

“The violent deaths of refugees fleeing yet another war, of fishermen, of families in marketplaces – this is what the conflict in Yemen looks like two years after it began…utterly terrible, with little apparent regard for civilian lives and infrastructure.

“The fighting in Hodeida has left thousands of civilians trapped – as was the case in Al Mokha in February – and has already compromised badly-needed deliveries of humanitarian assistance. Two years of wanton violence and bloodshed, thousands of deaths and millions of people desperate for their basic rights to food, water, health and security – enough is enough. I urge all parties to the conflict, and those with influence, to work urgently towards a full ceasefire to bring this disastrous conflict to an end, and to facilitate rather than block the delivery of humanitarian assistance.”
Time is on no-one’s side as regards the crisis in Yemen. As nightmare visions of living skeletons with bloated bellies and pleading eyes once more appear on the planet’s TV screens, we in the U.S. will have missed a vital chance to avert a world in which untold millions are to be shocked to their bones.