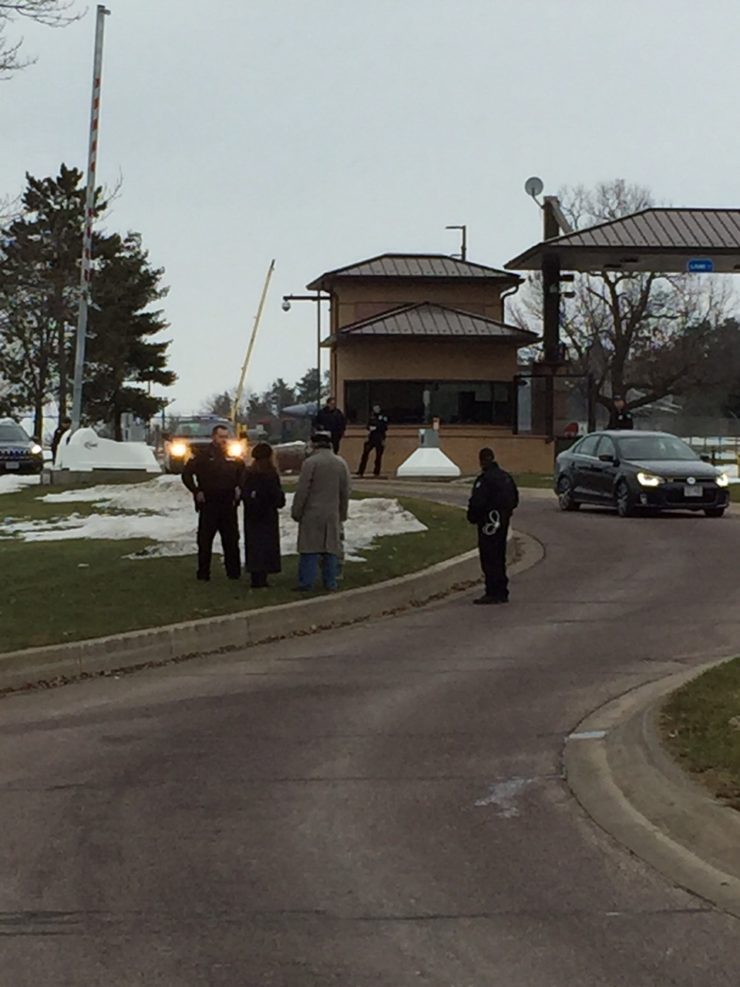 On June 27, at 3:30 PM, members of the Wisconsin Coalition to Ground the Drones and End the Wars will close the gates of Volk Field in Camp Douglas, Wisconsin, with yellow “CRIME SCENE” tape. This is an action that is made necessary, they believe, by the base military police and the Juneau County Sheriff’s Department negligence regarding crimes routinely being committed there.

For more than five years, officials at Volk Field have rejected requests by anti-drone activists seeking conversation about their concerns. Letters mailed to the base commander have gone unanswered. On one occasion, May 29, 2013, members of the group attempted to deliver an indictment to the base, charging that “the drone training being carried out at Volk Field leads to a deliberate illegal use of force against another nation, and as such is a felonious violation of Article VI of the US Constitution,” which states: “…all Treaties made, or which shall be made, under the Authority of the United States, shall be the supreme Law of the Land; and the Judges in every State shall be bound thereby, any Thing in the Constitution or Laws of any State to the Contrary notwithstanding.” A requested meeting with the base commander was denied and five of the group were arrested. “We are fulfilling our obligations under Nuremberg, and exercising our First Amendment rights by going to the base today with this indictment.  We must speak out and act in resistance when our government is breaking the law and murdering innocent children, women, and men,” explained Kathy Walsh of Madison.

Local officials responsible for enforcing the law have not responded to or investigated the allegations of the Coalition, choosing instead on several occasions to take them to the county jail on false criminal charges of “trespass to a dwelling.” Each time these charges have been eventually reduced to noncriminal county ordinance violations and after perfunctory show trials, the protesters have been sentenced to pay fines. Some who have refused to pay these fines have been jailed. Officers of the Juneau County Sheriff’s Department have also ticketed the cars of demonstrators for petty violations and have violated their own department policy by checking the license plate numbers of “all vehicles… that appeared to be involved in the protest,” even when parked legally, because, according to Undersheriff Craig Stuchlik, the coalition has “had a person attend your protests in Camp Douglas who has threatened to kill our Deputies.”

The events organized by the Wisconsin Coalition to Ground the Drones and End the Wars are in opposition to assassinations and to any use of violence. The Coalition denies that any of its members has made such threats. The Coalition regards the Sheriff’s Department’s unsubstantiated allegation as an attempt to intimidate citizens exercising their rights and to excuse their own misconduct. “It is the chain of command that trains soldiers in the operation of the RQ-7 Shadow Drones that is threatening to kill, and not those as a matter of conscience are peacefully protesting this U.S. program of targeted assassination,” says Joy First of Mt. Horeb. “The police are going after the wrong people!”

Some members of the Coalition will not leave Volk Field voluntarily unless base authorities suspend the RQ-7 Shadow Drone training pending an investigation of its legality. In the event that the Juneau County Sheriff’s Department once again declines to enforce the law, some Coalition members may be subject to arrest. Brian Terrell of the Chicago based Voices for Creative Nonviolence has been committed by a Juneau County court to five days in jail after refusing to pay a fine resulting from a protest at Volk Field in February, 2016, and expects to serve his sentence immediately after the protest.