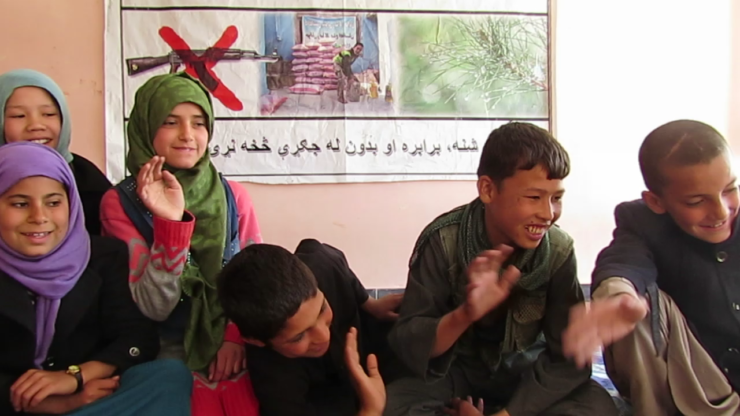 You can view a one minute video clip of a conversation between Afghan street kids and Indian 5th graders above: From Afghanistan, children and youth learn through relationships

Both the panicky rich and the fearful poor are unhappy.

We walk the streets,

and whether they’re speck-less or lined with grimy dust,

we feel a pollution of anger, sadness and helplessness.

about our souls and societies that need healing.

As seen here in Kabul,

Afghanistan has the most number of drug addicts in the world, an estimated 1.6 million

I feel so overwhelmed by the gap

between what humans wish to be and who we’ve become

that I just focus on managing my individual day well.

This isolation shifts when I see that,

for me to have a ‘good individual day’,

other human beings should also have decent days.

Their well-being is connected to mine.

Inham, working in the streets since 8 years of age,

eased me into the drug addiction crisis;

without needing to explain it.

His father is an opium addict,

but Inham doesn’t judge him.

How can we call such an economic system ‘good’,

when Inham works and lives in poverty,

and his father had tried drugs

to placate the desperation of making ends meet?

I asked Inham if he felt happy or sad most of the time.

An Afghan labourer with no work

There’s no viable employment in Afghanistan,

except with the military and the police.

There are more fancy cars for the rich

to take up loans for a face-saving ceremony.

civilian and military deaths and corruption,

From left to right: Bismillah, Qasim and Nawid in Kabul,

Then, I saw how the Afghan Peace Volunteers

of inequality, war, climate change and other issues,

each time they conversed with one another online,

in what has developed further into Relational Learning Circles.

My heart was churning with excitement

when a Syrian, an Armenian, a Peruvian and a Nigerian

I saw a revolution:

Seven out of eight said,

“Yes, we can abolish war.

It will take time.

We can do it together.”

I saw the ‘positive sparks’ fly,

“How do you think the government can end the war in Afghanistan?” Delhi asked.

11 year old Sabrullah was like a sage of Kabul,

“If the government wants the war to end,

guns should not be used

and should be banned in Afghanistan,

and in their place, we should have pens and books.”

They said goodbye and the Indian students

thanked their new Afghan friends in Dari they just learnt,

Inham observing the conversation, and learning too

Inham growing up in the digital age

processing what he was hearing as kids and adults do among peers.

I asked him if he was open to speak with friends in New York,

showing him the ‘distance’ on a map.

He understood the time zone difference, then,

Once, I saw him playing with another kid’s imitation smart phone;

our instincts of “I want to be happy”,

in the maze of today’s ‘disconnect’.

Inham, drawing for fun, before his street kids’ class

Poverty, the risk of sudden death,

an un-affirming space in school,

all these find a tough prey in Inham.

On days when we feel like we can’t do anything,

we know we can do this:

We can calm down and relate differently.

We can reach out for the welfare of others.