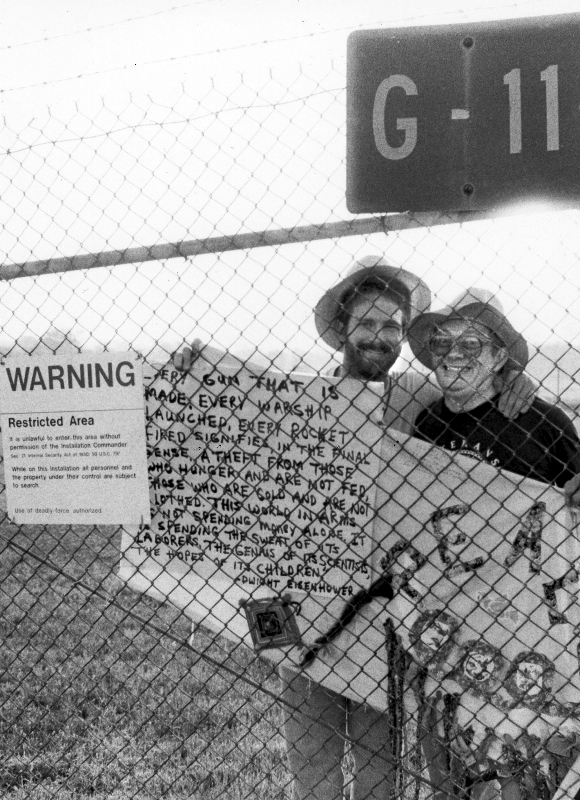 Fr. Jerry Zawada OFM – nuclear resister, peace and justice activist, Franciscan friar – died on the morning of July 25 at the age of 80. Jerry served his early years as a Franciscan priest in the Philippines, and later worked with the homeless, war refugees and survivors of torture in Chicago, Milwaukee, Mexico, Las Vegas, Tucson and elsewhere. Jerry was imprisoned for two years in the late 1980s for repeated trespass at nuclear missile silos in the midwest; served three six-month prison sentences (2001, 2003, 2005) for trespass at the School of the Americas in Fort Benning Georgia, and two months in prison in 2007 after crossing the line to protest torture training at Fort Huachuca, Arizona. In 1990/1991, Jerry joined the Gulf Peace Team on the Iraq border before the first U.S. invasion of Iraq. A few years ago, his advocacy for and celebration of mass with women priests earned a disciplinary letter from the Vatican.

He never stopped standing up and speaking out for a peaceful, just and nuclear-free world, even when in recent years he slowed down physically and wasn’t quite sure how fast his legs would carry him.  His life will remain an example to so many – those who knew and loved him, and those he never had an opportunity to meet.

This was written by Mariah Klusmire in 2009 when she was living at the Trinity House Catholic Worker in Albuquerque, planting the seeds for the informal but enthusiastic Jerry Zawada Fan Club: 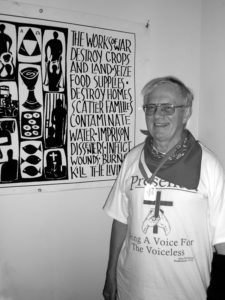 Mariah’s column on the Underground heroes of the movement

I have a hero who is everything a hero needs to be: he’s kind and loving but at the same time just and humble; he takes his vocation seriously and has given his whole life to the cause of peace. His name is Jerry Zawada and he is a “retired” Franciscan priest currently living in Arizona doing the much-needed work of supporting migrants on the Border. To try and describe what makes Jerry so amazing in a few short paragraphs is almost impossible—in fact, I put off writing this because I knew it would be so hard. So forgive me Jerry and fellow Jerry Z. fan club members, as I attempt to put to words just how amazing this man truly is. When I first met Jerry he was just coming out of jail for a protest that he was involved with, and I quickly learned that he was no stranger to breaking rules. In fact the religion teacher at his Jesuit school had told him not to enter the priesthood because he broke rules just to break them (just to clarify, Jerry says that he doesn’t break rules just to break them, but if he doesn’t see the purpose of a rule, he’s not going to go out of his way to follow it). So he went and became a Franciscan priest, and he’s been keeping them on their toes ever since. A tireless advocate for war and torture victims, he’s been to Iraq during the sanctions, bringing supplies and teaching the kids “jingle bells.” He’s been arrested three times at the School of the Americas and once at Fort Huachuca, not to count out his countless arrests at other military bases in defiance of war and militarism. The man has given his whole self to God and his fellow brothers and sisters, and refuses to take any praise for it in return. When I first told him I wanted to make a Jerry Zawada fan club, he asked “what for, I haven’t done anything.” But he has done something—he has motivated people around him to live a more humble and loving life. Through his experiences and thoughts he has inspired me to live closer to God and his people. Even though he hasn’t written hundreds of books on faith and action, and even though he may not be the head attraction at a rally or vigil, he is truly what Jesus intended when he called us to serve his people.

And so I proclaim to the world:

Jerry Zawada= Supreme Badass and deserving of a fan club