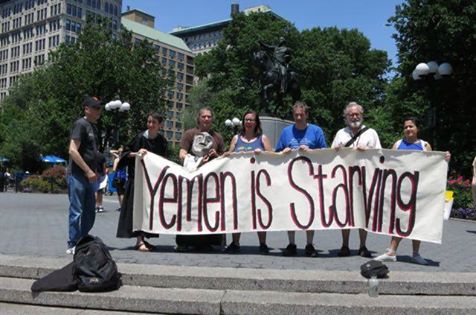 You may have noticed that the conflict and catastrophe in Yemen has received a significant up-tick in attention recently, and this is not simply because of the growing cholera epidemic. There is now a hopeful cause to be engaged.

Members of the NY Catholic Worker will be out protesting the ongoing US/Saudi bombing of Yemen in Union Sq. Pk. each Saturday, from 11AM until 1PM. We meet at the top of the steps at the south-end of the park, near the statue of George Washington on horseback. In the past few weeks we have been joined by several other groups, including Veterans for Peace, the 15th St. Quakers, the Campaign for Freedom and Democracy, the War Resisters League, the Benincasa Community, the Kairos Community, Grannies Peace Brigade and the Democratic Socialists of America.   Please come out and join us as the humanitarian crisis worsens and voices of hope are being raised.

In March of this year, Human Rights Watch issued a report detailing 81 documented cases of unlawful attacks on the part of the US/Saudi/UAE bombing campaign in Yemen. In 24 of these attacks US supplied weapons were used. HRW has warned repeatedly that the duration and persistence of attacks on civilians and civilian infrastructure would entail that weapon suppliers have knowledge of, and are thus complicit in, war crimes.

On the basis of these and other reports, in June, a bi-partisan group of US Senators, among them Rand Paul (Rep. KY) and Chris Murphy (Dem. Conn.) – put forward a resolution in the Senate to curtail arms shipments to Saudi Arabia. In response Senate Majority leader Mitch McConnell organized a top secret briefing urging the Senate to OK the $500 million arms sale.

The resolution was very narrowly defeated, 53 to 47, and was thus a sort of victory, suggesting that concern for human rights and the rule of law were not yet dead.

Shortly thereafter we were told that the Saudi’s have agreed to purchase a $750 million, multi-year, training program to help prevent unlawful attacks – a sardonically cynical response – followed shortly thereafter by the bombing of another market in Saada, killing 25 civilians. So, we have perhaps been slapped awake, but we are still being slapped around. Notably, mid-air refueling of the Saudi coalition’s bombers has increased by a third under President Trump.

Currently, some 17 million – of Yemen’s 28 million – people are food insecure. Half a million children below the age of 5 already suffer severe acute malnutrition, which means that, if they survive they are still likely to suffer life long developmental difficulties. Meantime, 7 million Yemenis are on the brink of starvation  and more than 3 million are internally displaced. All of this is very much a consequence of the Saudi/US bombing, which for more than two years now has targeted civilian infrastructure: Hospitals, schools, factories, markets, funerals, sea ports, electrical power stations and water treatment facilities. More than half of the hospitals in the country on not functioning.  Thus, while the armed conflict has directly taken the lives of some 12,000 people, last year alone more than 60.000 children died from a combination of malnutrition and  otherwise easily preventable ailments and diseases like respiratory infections, measles, and cholera.

Over the past five months, malnutrition and  compromised immune systems have been joined by their deadly counterpart, plague. A vast cholera epidemic has engulfed Yemen. Indeed, Yemen now has the distinction of hosting the largest cholera epidemic to occur in one year in recorded history.  Currently, over 500,000 Yemeni people have been stricken. More than 2000 have died as a result.

Notably, 99% of those who receive medical attention survive. But as half of the hospitals in the country have been bombed and ports blockaded –  severely restricting the supply of food, fuel and medicines –  less than half of the country’s people have any access to medical care. Yemen is being strangled!

As you may know, cholera is a water borne disease and the rainy season is just beginning.

I hesitate to mention that several news reports have sited a sudden uptick in meningitis cases.

Yes, voices are being raised, but the great powers are staying the course: Yemen suffered more air strikes in the first half of 2017 than in all of 2016. Recently the US/Saudi coalition bombed a small caravan of fleeing civilians in the Taiz province. 20 were killed. Ten children. Just two weeks ago another dozen were killed when a house in Saada province was entirely obliterated. Half of the fatalities were children.  At the end of last month the Saudi’s refused to allow 4 oil tankers, carrying the equivalent of 10% of Yemen’s monthly fuel needs, to off load at the port of Hodeidah. That fuel is necessary to run hospitals, refrigeration units, water treatment facilities, etc.  Then last week, in what appears to be a related development, the Saudi’s have begun blocking jet fuel deliveries to the airport in the Nation’s capitol, Sana’a, effectively reneging on an agreement to allow two humanitarian aid flights in each day.

Yes, Yemen is being strangled. But voices are being raised! The humanitarian organizations Save the Children and Watchlist have begun campaigning to have Saudi Arabia be put on a United Nations blacklist of nations that are committing grave offenses against children. This was attempted once before. Last year in fact. But Ban Ki Moon, then UN Sec. Gen., backed down in the face of Saudi threats to pull out all of its financial assistance to the UN. Now the current head of the UN, Antonio Guterres will face the same dilemma. Pray that he hear the cry of the poor, the cry of justice –  and not back down!

And come join us and raise a public outcry.

Hope to see you all!