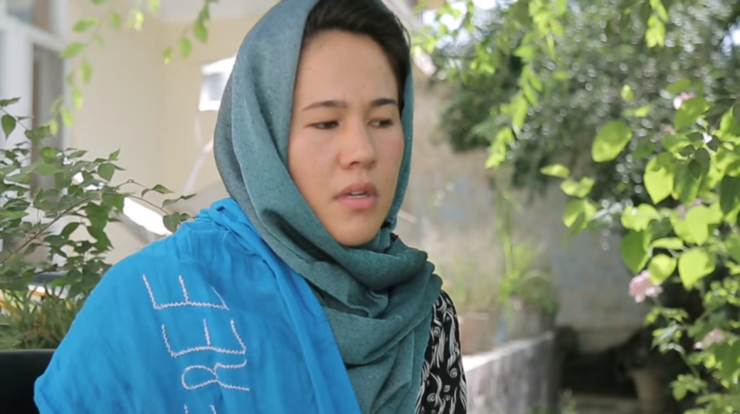 One Autumn day in 1998, seven-year old Zarghona Darya was doing her homework on the floor of the family house in Bamyan province, when her father rushed in, shouting “Taliban! Taliban!”

It was the start of a nightmare ordeal for Zarghona and her family, which she recalls today with tears in her eyes.

The Taliban militants had occupied the city and were rounding up anyone they deemed suspicious or potentially hostile. Like many people, Zarghona’s family ran to the mountains and hid in the sandstone caves near the famous Buddha statues, which in those days were still standing.

“Taliban fighters followed us to the mountain on horses,” she continues, “they were wearing black turbans, had massive bearded faces, and long shirts. They captured my father and my grandfather, dragged them down the hill and sprayed them with bullets in front of our eyes.”

Recalling that night of horror, Zarghona Darya – now 23-years old and a journalism graduate and peace volunteer – has tears in her eyes. She does not want to remember the terrifying years of Taliban rule that followed. Instead, she prefers to tell us about her life now – how she works for peace in Afghanistan, trying to ensure that those terrible days never come again, and that no other schoolgirl has to witness the brutal murder of their father.

“I paid a heavy price due to the lack of peace in our country,” says Zarghona. In her early days at the University of Kabul, Zarghona read All Men are Brothers, a collection of writings by Mahatma Ghandi, the famous Indian activist for peace and civil rights. Gandhi’s philosophy of peace and nonviolence inspired Zarghona to join with other students to promote these values. “The only path which can take us to peace is promoting nonviolent behavior,” Zarghona says.

Zarghona Darya is young peace activist in Kabul. She is part of a diverse group of people who campaign for peace.

After seven years of working with Afghan Peace Volunteers, Zarghona is now a well-known figure among peace activists. She and her co-volunteers are working with street children to teach them about the principle of nonviolence. Zarghona remembers that in early days of the organization, the children who were coming to the center would fight and argue with each other. After several sessions, however, she noticed many positive changes in their behavior.

“Peace comes from the grass roots of society and works its way up, not the other way around,” says Zarghona. She wants to remove the divisions between the various ethnic groups in the country, so that all members of society can live together in peace and harmony as members of the Afghan family. This is what she calls ‘Border Free’, a phrase which has become the slogan of her youth organization -the Afghan Peace Volunteers.

Zarghona believes in the power of art and culture to promote nonviolence and harmony in society. Her organization invites young people of different ethnicities to their centre, to learn and practice the traditional dance called ‘Aten’. Guitar lessons are also taught there.

Encouraging men and women to live alongside each other in peaceful harmony is also important for a nonviolent society, according to Zarghona. Her organization invites boys and girls to participate in a weekly cycling event to set an example of peaceful coexistence.

Zarghona believes the nonviolence movement is growing. After decades of war, she recognizes that more work needs to be done, but she believes that, at heart, peace is the fondest wish of every Afghan.