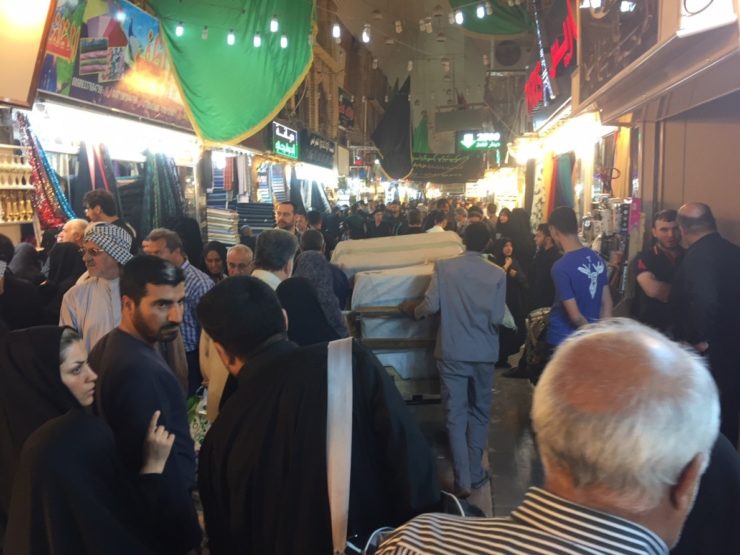 We just got back from a brief outing in the old city.  It was bustling as thousands of pilgrims are descending on Najaf and Karbala from Pakistan, Bangladesh, Iran and other places.  The “souqs”, or market aisles, were crowded even at this early hour.

Sami and I ducked into a little “three table” restaurant to have, I thought, a glass of tea.  The owner is a friend of Sami’s, and I had been there on previous visits. To my surprise, however, he knew about the conversational English course and that I was visiting Iraq!  I swear the whole city knows Sami!  The cup of tea turned into a table laden with plates of food!  So typical of Iraqi hospitality. 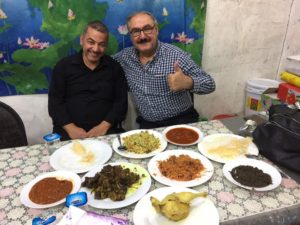 The other day Sami and I visited an Institute of Higher Learning for Nurses and Midwives.  We were able to look in on a classroom of women students studying midwifery.  The lesson on the overhead projector was in English.  After introductions, and to my embarrassment, Sami said that perhaps I could come another day to give a lecture.  He asked the teacher what topics would be of interest.  “Early Child development” was the answer.  I told them laughingly that I was a retired nurse whose field of study had been geriatrics, but that I would be very interested in hearing from them about the challenges they face.  I told them of the many people in the U.S. who are eager for news about how things are in Iraq, especially after the suffering the war has caused and continues to cause. 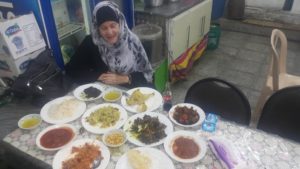 Someone replied that they would become depressed if they began to speak about the war.  There were about thirty women ranging, I would guess, from twenty to fifty years of age.  One student gestured to a woman sitting close to where I was standing,   “Her son was killed in the war.”   What can one say at such a moment?  When we left I was able to embrace her briefly hoping she would feel our sorrow.

Later tea was offered to us as we sat with some of the staff.  “Before 2003 we had two small units for cancer patients “one shared. “ Since the war, cancer has increased so much that it has become like the common cold… Besides what the war has produced, the government is not doing its job.  The air is polluted as well as the water.”  That very morning I had had to close the window in my room as the air was so acrid and foul smelling.

One of the things they desperately need is textbooks:  Pediatric nursing, Medical Surgery, Basic Community Nursing, Maternity, Mental Health nursing, Fundamentals of Nursing, Pharmaceutical Nursing,  Nursing Diagnosis Handbook,  and so on.  If you have contacts with Nursing Schools, Medical colleges, professors, etc. please put out the word.  We would welcome their collaboration.

After the 2003 US-led invasion, as the years progressed and the death toll and number of injured due to bombs and explosions kept increasing in Iraq, I found myself unable to cope emotionally.  While I continued to record and report on the number of deaths and wounded, a part of me shut down, unable to imagine how hospitals and staff were coping with the ongoing carnage.  A few days ago, I was with some women doctors and I asked about the incidence of amputations and the availability of prosthetic devices.  “I see many victims of war in my practice, many armless and footless people” said one of the doctors. “We don’t have the prosthetic devices that are needed.”

They confirmed what I have heard over the years about the almost total absence of Psychiatric care and facilities in Iraq.  What do people do in the face of such tragedy?  I asked.  One of the doctors said unabashedly “They go to pray, and they get better.  It is our faith.”

A few days ago a young teacher told me that his uncle had gone to Mosel to join the fighting there against ISIS.  He returned without both of his arms, both of his legs, blinded in both eyes, and deaf in one ear.  I was completely taken aback.  How does one deal with such tragedy?  How does the wife and family live with such hardship?   I asked about this.  The answer was emphatic  “A man cannot say he has psychiatric problems.  He has to be strong.”  Two days ago I met a severely handicapped man who wondered if I could help him get to the United States?  “There is no life for me here”  he told me through a translator.  “I would take my life if I had the courage.”

One of the things on this trip that I have heard repeatedly expressed is the desire to leave Iraq.  It is not that people don’t love their country, but they see no future here.  There is high unemployment;   I would guess that half of the “students” in the English conversation class are without work.  Corruption is so widespread and pervasive—and has gone on for so long now–that it seems to be taken for granted.  You can graduate from college by paying someone off.  You get a job by having the right connections. People feel powerless and unable to affect even the slightest change.

And yet…..I have met several Iraqis in the last weeks who have lived abroad, but recently decided to return to their country together with their spouses and children.  Just as Sami did back in 2004, I believe it was.  “People tell me I am crazy to come back” one of the recent returnees told me.  But, they are unable to stay away.  While I am not surprised that they have returned, it gives me needed hope in these dark times.