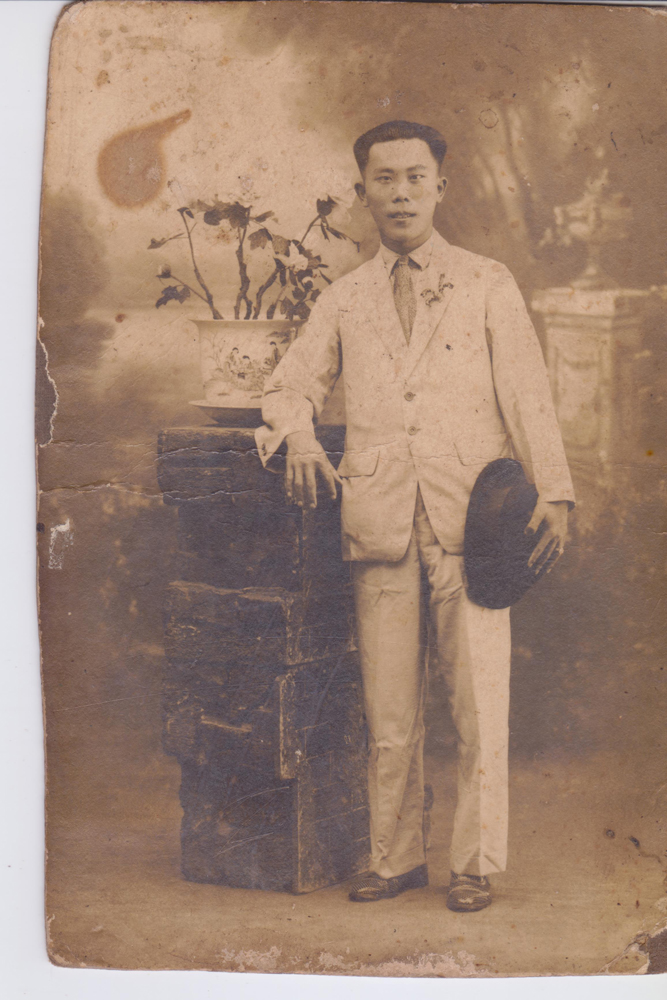 Above: The sole existing photo of Hakim’s paternal grandfather, killed at Changi in 1942

On the 28th of June, I spoke at a small event organized by my friends from Amber Air, named “Peace of Heart – imagining a world beyond war”, held at the Kranji War Memorial. The War Memorial remembers 24,000 men and women who died defending Singapore and Malaya against invading Japanese forces during World War II. The soldiers were from the United Kingdom, Australia, Canada, Sri Lanka, India, Malaya, the Netherlands and New Zealand, and their bodies were never found. 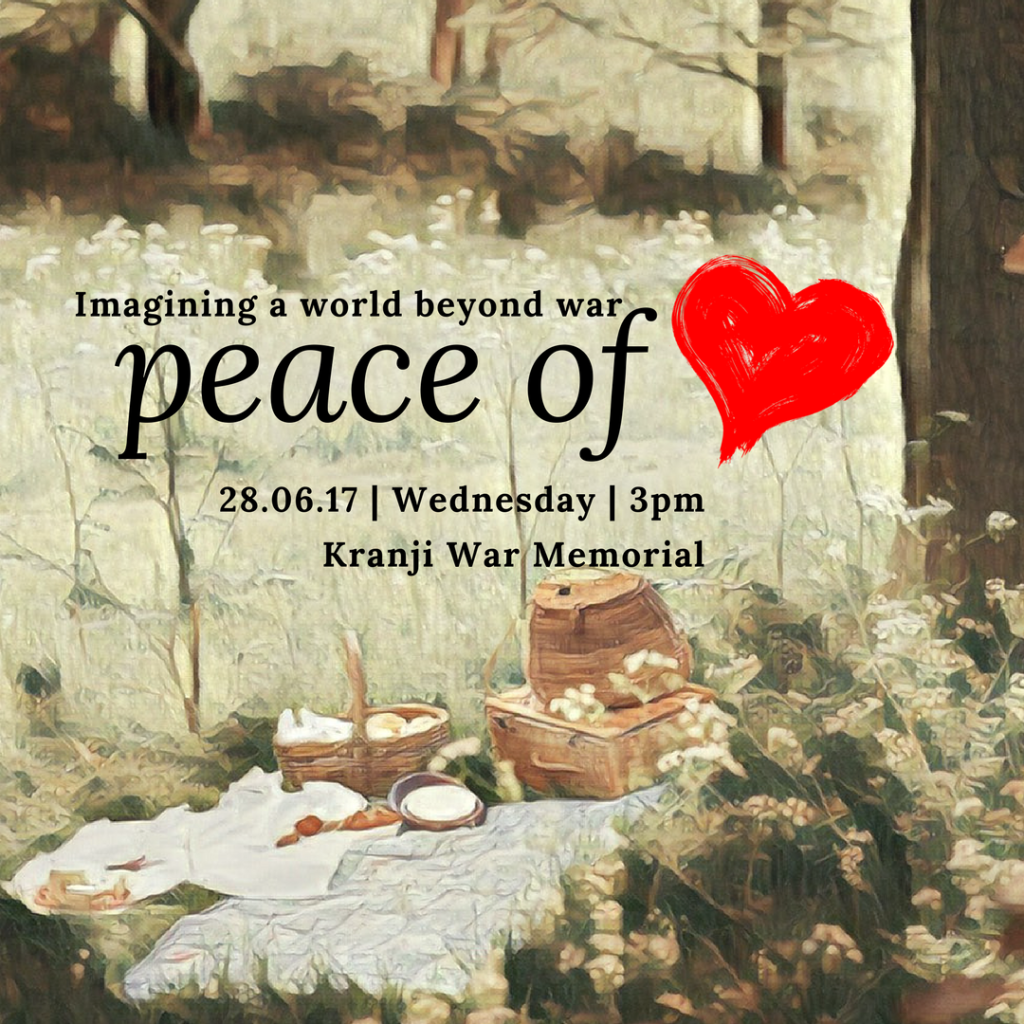 Originally, I had wanted to experiment with the heavy topic of the ‘abolition of war’, but Suraj, Nawal, Tizi and Shah felt that, for Singaporeans, we had to approach this idea differently.

It was significant that the Amber Air team chose the word ‘imagining…’ for the event’s announcement, reminding me of two historical personalities, John Lennon and Albert Einstein. John Lennon wrote and sang ‘Imagine’:

Imagine there’s no countries.
It isn’t hard to do.
Nothing to kill or die for
and no religion too.
Imagine all the people living life in peace.
You may say I’m a dreamer
but I’m not the only one.
I hope someday you’ll join us
and the world will be as one.

As for Einstein, ‘imagination was more important than knowledge’. In his imagination and reasoning, ‘war cannot be humanized. It can only be abolished’

Probably, most Singaporeans presume that we need military defence against possible aggressors and incorrigible ‘terrorists’. Einstein lived in a time when that presumption was also universal. Yet, in his 1946 address to the symposium “The Social Task of the Scientist in the Atomic Era” at the Institute for Advanced Study in Princeton, New Jersey, Einstein said very clearly, “So long as war is not prevented, all the governments of the nations have to prepare for war, and if you have to prepare for war, then you are in a state where you cannot abolish war. This is really the cornerstone of our situation. Now, I believe what we should try to bring about is the general conviction that the first thing you have to abolish is war at all costs, and every other point of view must be of secondary importance.” Einstein’s conviction should help us to consider whether abolishing war is a stupid or naïve idea after all. 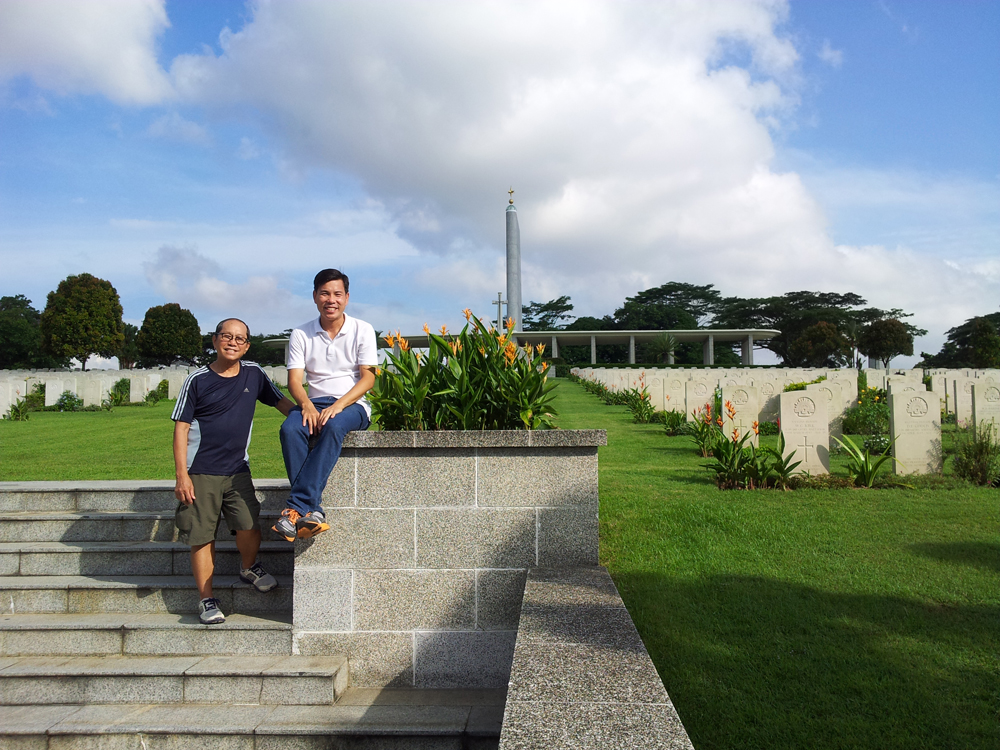 Hakim and his father at Kranji War Memorial Singapore

War is very real to my father because my paternal grandfather was killed in the Japanese Occupation of Singapore. If war had been abolished before WWII, my paternal grandma would not have had to grieve for most of her adult life. She never complained and wasn’t bitter, but a photo of grand-dad remained a permanent memorial in her living room till her passing.

If there was no option to resort to war in any dispute, we would have applied our imagination, creativity, empathy, compassion and our very advanced sciences to develop peaceful human relations and nonviolent, non-military methods of ‘terror’ prevention and conflict resolution.  Our world would have moved beyond war. Kranji War Memorial may not have been ‘necessary’.

24,000 soldiers are remembered at Kranji War Memorial,
perhaps in the same way my father’s father is ‘remembered’,
namelessly, without a corpse,
at Singapore’s downtown Civilian War Memorial Park.
This home visit, my dad finally found an old photo of my grand-dad,
just one image,
which I quickly scanned.
Perhaps, it will be the only digitalized photo
of a grand-dad I never knew,
but it will help me
to say ‘no’ to all wars,
knowing that when the Japanese soldiers killed my grand-dad,
neither they nor my grandpa knew each other.
The conscripts had severed some relationships forever:
They deadened ties with their own feelings.
They terminated the breath of a stranger,
cutting my grand-dad off from life,
from his wife and children,
and from the wishes he must have had
when he stood in the photo studio
with a hat in one hand.
I’m confident that the soldiers wouldn’t have fired or stabbed,
if they knew my grandma, and her little children,
including my three-year-old dad. 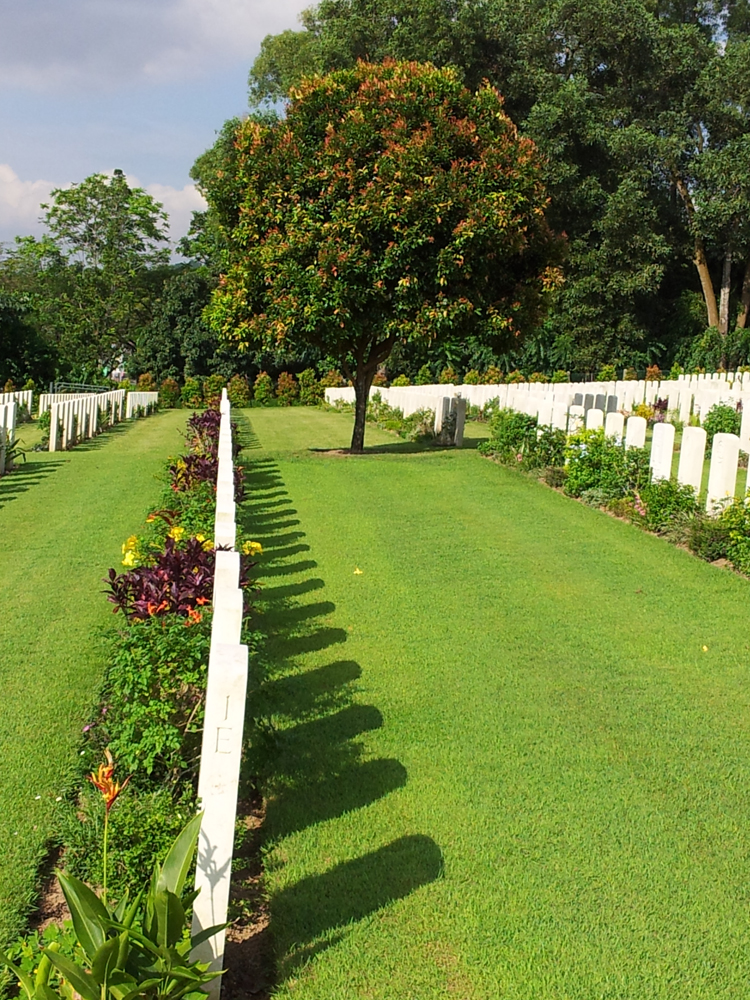 The green cemetery on our planet Earth

My grandma told it plainly,
with a quiver of indignation in her fingers,
“They stood them in a long line,
And randomly separated them into two queues.
Your grand-dad was sent to the ‘wrong’ queue.
He should have jumped off the truck that took him away.”
War killed my grand-dad,
as it continues to kill many
husbands, sons, daughters and mothers everywhere,
like in Afghanistan.
My dad still resents the Japanese a little,
recalling the Kamikaze suicide bombing pilots et al.
To deal with those Japanese ‘terrorists’,
the U.S. dropped two atomic bombs.
On civilians.
Today, the U.S. and Russia have accumulated 94%
of an estimated 26,000 nuclear warheads on planet Earth,
as if our brains cannot grasp the illogic of mutual-annihilation.
How can any thinking person in the scientific and communications age
believe the propaganda that those born in
the U.S. or Russia or North Korea or Iran etc
are somehow ‘evil’ enemies,
and atomic incineration is needed to ‘deter’ them? 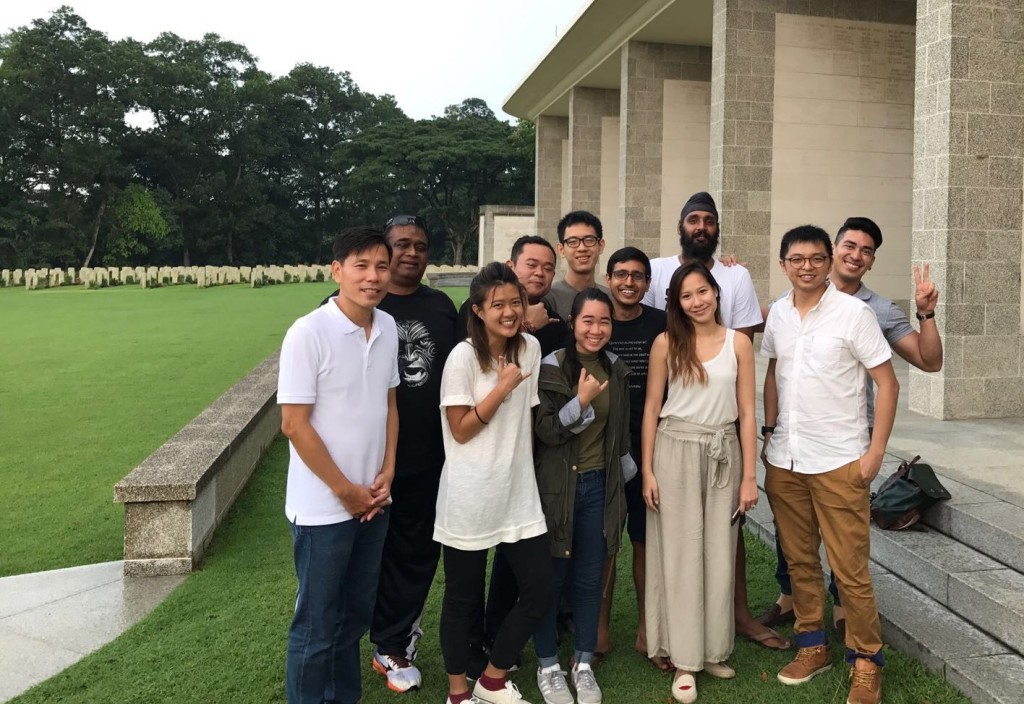 The circle that gathered at Kranji War Memorial.

Thus, sitting between the Kranji Memorial walls,
taking shelter from a comforting rain,
I shared with the cozy group how I had learned that
relationships can guide us to peace,
that the Afghan Peace Volunteers who have every angry and vengeful reason
to wage war against ‘terrorists’,
wish instead for war to be abolished.
Why should we care for war-sufferers far away?
“I believe that the well-being of every human being,
even people we don’t know,
makes our lives more complete and meaningful.”
I didn’t have answers or wasn’t sure of my answers
to a few questions that afternoon.
But I was sure about how
my friendships with Afghans changed me.
Relationships have drawn me into Einstein’s insight,
that making war obsolete
is of primary importance. 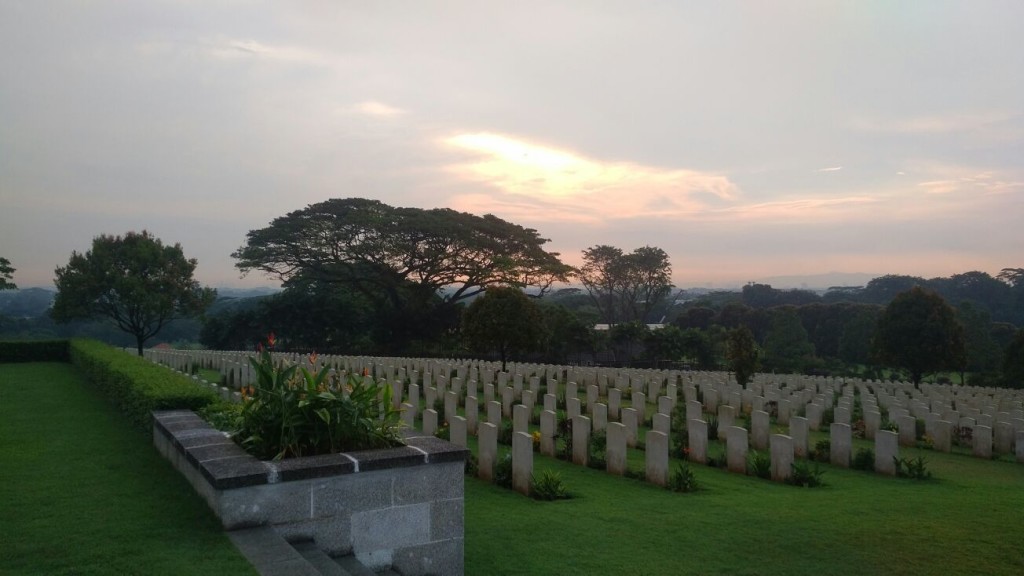 The earth revolves and spins around the sun as human beings wage wars on the only home we have.

In that circle, Shah also felt that
relationships can change everything,
as it did his life.
“Relationships can alter our bio-neural-psychological selves,” he said.
The writing on Bamiyan Peace Park’s signage
flashed through my mind, ran between the rows of Kranji’s cemetery
and embraced the orange-yellow rain clouds
in the grey Singapore-Malaysia horizon:
“Even a little of our love is stronger than the wars of the world.”
I was glad that Shah had brought his Borderfree Blue Scarf.
I gave him a new scarf
as I said goodbye,
walking towards the Underground train
of people glued to their mobile screens,
of advertisements for a career with the Air Force,
of modern technology that would zoom me home
to relationships,
without which there would hardly be any meaning. 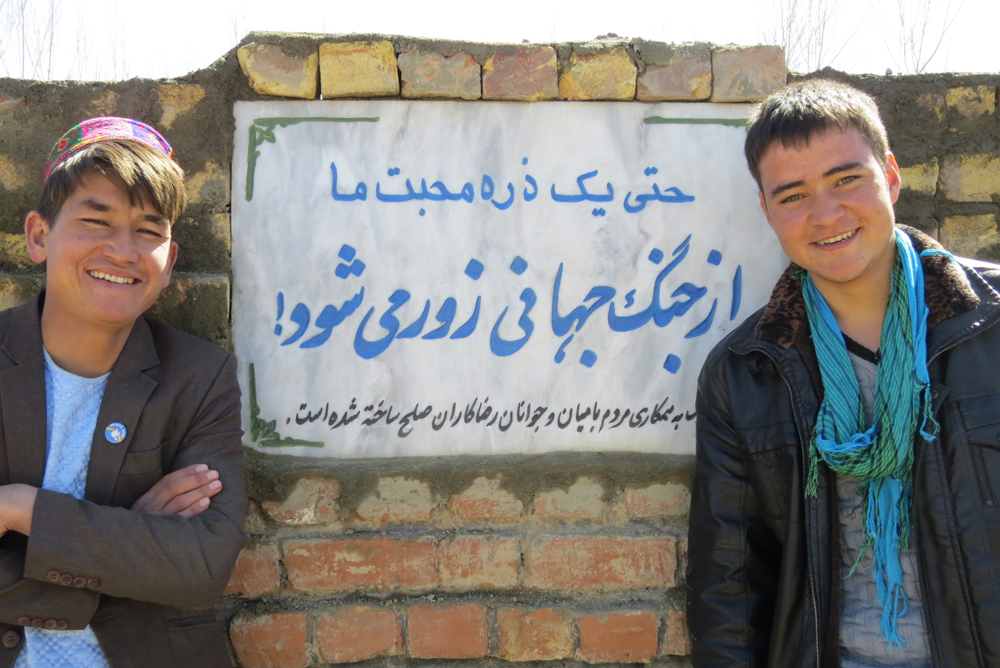 Afghan pals Ali (left) and Zekerullah, who have also lost loved ones to war, standing next to the Bamiyan Peace Park signage: “Even a little of our love is stronger than the wars of the world.”