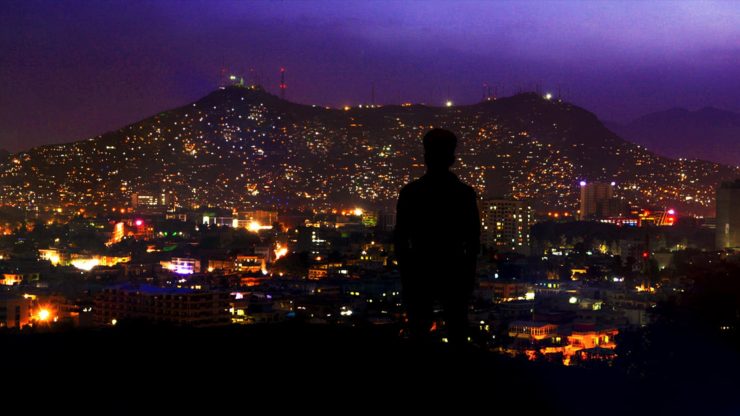 Early on the first day of 2018, as first light got a tentative fingerhold on the eastern sky, the small light on our balcony flickered once and went dark. Due to the city’s inability to produce electricity adequate to supply its more than five million inhabitants, today’s “rolling blackout” would plunge our neighborhood into darkness for the next six to eight hours.

Yesterday afternoon, the temperature hovering near 50 degrees, three of us set out for an afternoon walk. Because of concerns for our security – I am, after all, a westerner, no matter how much I try to appear native – I removed my eyeglasses, donned the surgical mask common among Kabulis looking to mitigate the effects of the city’s ubiquitous smog, wore a headscarf, and, since I only speak English, agreed not to talk. We passed through the district known as Pul-e-Sorkh. The wide street was thronged, pedestrians looking to purchase anything from a quick lunch (whole fish flashed-boiled in a giant wok bubbling with hot oil; spicy “chips” [French fries] rolled in thick Afghan bread and dipped in hot sauce) to an abundance of fresh winter vegetables. Vending carts filled to overflowing with colorful socks and scarves vied for room with a logjam of others similarly packed with oranges and nuts.

We crossed a bridge spanning the Kabul River, only a trickle of fetid, polluted water at this time of year, its banks strewn with burst bags of trash. Hovering along its edges, a small group of Afghanistan’s estimated three million opium and heroin addicts hugged a wall in search of some mid-afternoon sun. As far back as 2014, the Washington Post reported, “It’s official: the US drug war in Afghanistan is a $7.6 billion failure.” Walking over even this small bridge, I was able to see the human face of the headline.

Down a dry and dusty side street lay the Kabul Peace Park, a small strip of land lined with thin, young trees. Each spring, around the time of Nowroz, the Afghan New Year celebrated on the Vernal Equinox, the Afghan Peace Volunteers (APV) plant saplings to help “re-green” the land, stripped almost bare of hardwood cut to fuel the fires heating many Afghan homes. In the coming years, the APV will delineate the park with a sturdy, decorative metal fence and sign. It is hoped that the Kabul Peace Park will serve as a site for relaxation and reflection in a sorely crowded city.

A short time later, we walked through a large public park. Filled with slides, ladders, and other toys for young children, on this day the park was populated by numerous students taking advantage of the high afternoon temperatures to sit in shirtsleeves and study, along with others playing games of football (soccer) and cricket.

We ended at one of Kabul’s many bakeries. Cookies beyond description vied for shelf space with decorated cakes and confections rich in honey and sugar. I could have pulled up an easy-chair! We bought a few things to share with our housemates and headed home.

The day ended when one of the APV was able to commandeer his parents’ car for a night-time tour of the city. I had never seen Kabul after dark. Alive with neon and packed with equal parts shoppers and strollers, it was a city vibrant with activity.

This morning, as I sat in our crowded, peaceful home waiting for the sun to fully clamber over the horizon, I thought, as everyone in Afghanistan is all-too-aware, that life is brief and tenuous. In the company of high-spirited, intelligent, and incredibly committed young people – such as the Afghan Peace Volunteers – it can, however, be truly beautiful.