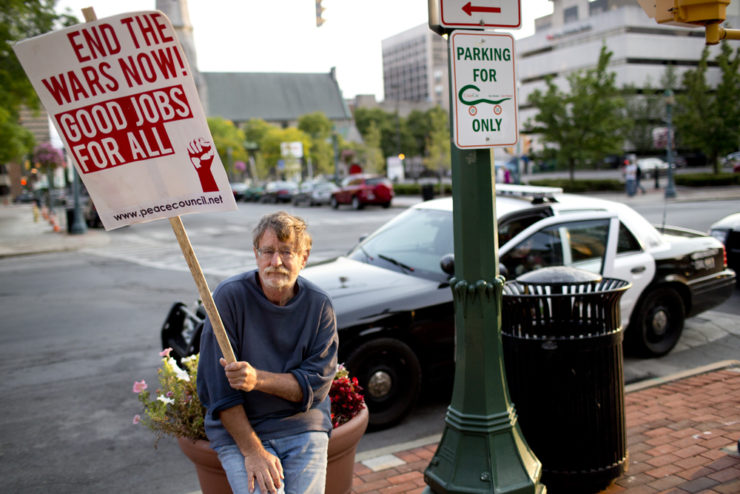 To work against militarism and for social justice is to struggle for hearts and minds. We “educate, agitate, and organize.” We reach out to the public to mobilize its conscience. But the public is large and we are few. Most ways to reach the public are costly. Or shaped by other agendas. So mostly we operate small scale. We could however make much greater use of a familiar and broad public forum: letters to the editor.

LTEs are a valuable tool. In writing them, we can transform ourselves, deepening our analysis and vision, making more public our witness, making steadfast our commitment. We’re standing up and out for what we stand for.

(Back in the eighties, after I had spent some weeks in apartheid South Africa, I returned to Syracuse, my hometown. Over the following months I showered our local paper, the Post-Standard with LTEs about the ins and outs and the injustices of apartheid. This flurry of letters intrigued a certain woman – Ann. We eventually met and we’ve been partners ever since. Which might point to yet another role for LTEs: matchmaking.)

LTEs jar, prod, scold. They recall, they inspire, they appeal to conscience. Each letter to the editor can reach many thousands of readers. Very cheaply. It only takes a computer (or paper and pen), and, if you don’t submit on-line, a postage stamp. And some engaging work. The Post-Standard, prints nearly a page of LTEs daily. It has a circulation of 70,000 (120,000 on Sunday) – with an estimated twice as many readers. Plus, lots get their news fix from their daily paper on-line, which includes LTEs.

LTEs are one of the most popular newspaper features. Let’s say one in three readers – either in the print edition or on-line – reads LTEs. Those tens of thousands are more likely than average to vote and act politically. That’s the audience we want to reach.

Often LTEs are a one-shot response to an issue or event. But for more impact one might write successive LTEs instructive to reader and editor alike. Each LTE would develop an aspect of a theme you might be particularly knowledgeable and passionate about. Such continuity and persistence is vital, especially for issues otherwise neglected or misrepresented in the media. Or by government officials. The one-shot letter is good; a series of letters on an issue is better. If you can’t support a particular cause financially, consider pledging to write (say) one LTE a month on its behalf.

If you write a letter to a local, state or federal politico, copy your newspaper. Don’t settle for it being read only by the politician’s staff. That staff is much more likely to call your letter to their boss’s attention if it also appears in print. They know thousands of voters are also reading it.

Many LTEs are written to a single periodical only. Yet a letter, without much effort, often can be adapted to others. The more widely a letter is published, the wider its influence. After some time and it hasn’t appeared, you might contact the letter editor, re-sending the original. Ask if your letter has been misplaced. With that prod, it may soon be published.

If it is framed as a response to a specific article recently appearing in the periodical, your letter’s publication is more likely. Some – not all — editors won’t print letters from outside their circulation area or more than one letter a month from the same author.

Three other factors affect whether a letter is published: space, ideology, and quality.

Space. In most periodicals, reader input is minimal. But many provide at least token space for LTEs. Typically, editors prefer short letters and may abridge or ignore longer ones. I work to keep LTEs to a single page.

Prestigious periodicals receive far more letters than they print. The New York Times receives oodles of LTEs. So your chances there are slim. But if the Times does print your letter, it will reach a particularly broad and influential readership.

“Op-eds” are long letters or short essays appearing opposite the editorial page. Where LTEs may be 200 words, an op-ed may be 600 or 800. To get that much space, you usually need expertise or distinctive background. Having spent time in some global hot spot like Central America or the Middle East can be a sufficient credential for an informed op-ed regarding that region.

Ideology. In the US we do have “freedom of the press”…up to a point. While mainstream media promote the public airing of (some) issues, they also set real – though elastic – limits on debate. After all, most media are big business with particular class and economic interests. Letters critical of such interests have rather less chance of being published. (Though to appear “balanced,” editors may occasionally run opposing or unorthodox views.) In the US, as in any country, the print media are more open to some authors and some topics than to others.

LTE writers may assume that the more bland and “balanced” they sound, the more chance they have of being heard. Maybe yes, maybe no. But this self-censorship, besides promoting boredom, redundancy and irrelevance, can be a cop-out. True, a forthright (or “radical”) letter may turn off some editors or readers. But forthright perspectives may well hearten allies and raise the consciousness of the receptive. Also, such letters legitimate worthy, less pointed letters. Without the contrast, other’s tame letters may occupy the outer fringes of discourse.

Letter writers are like court jesters. We have license to speak more boldly than journalists and columnists. LTEs are do-it-ourselves journalism. Our letters can cite facts (e.g. about corporate corruption or US foreign policy) that many in the industry seem to avoid even thinking about. These pros have families to support, bosses to please, careers to make. Often they’ve so internalized the constraints that they are no longer aware of their self-censorship. Because the population at large are likewise afflicted, our letters are all the more essential.

LTEs are an opportunity. If we don’t exercise that opportunity, we’ve lost it. So we must not gag ourselves at the outset. We need to probe the limits of expression, mindfully. In doing so we may even expand those limits: “If you don’t push, it won’t budge.” Most papers print few challenging letters, not because they consciously censor, but perhaps because we are too tame (or too busy) to submit them.

Quality. The more concise and carefully written a letter, the more likely it will be printed…and have impact. Spare the editor the chore of condensing or cleaning up your letter. Otherwise, even if your LTE gets published, the editorial scalpel may hamstring your continuity and coherence. To shorten a longish letter, an editor may remove parts she doesn’t fancy. Careful, concise writing can keep your message intact.

To make the editor’s job easier, type and double-space your letter. LTEs should be neat, timely, accurate, grammatical, non-rhetorical and free of unintended ambiguity. Your letter should cite up front a recent article or relate to a theme recently broached in the paper. For readability, favor short, familiar, concrete words, short sentences and short paragraphs. To provide context, include who/what/where/when facts. And to provide more impact, don’t neglect the “why” factor.

Be careful to get your facts right; when citing facts an editor might doubt, supply a source footnote. The note won’t be printed, but it aids fact-checking and boosts credibility. Also, if you have a relevant credential that gives your views heft, note it – either in your text or as a writer’s ID at the beginning or end.

An effective letter takes sweat. You may be working to express ideas you’ve never before put to paper. I sometimes don’t know quite what I think until I wrestle those thoughts onto the page. You may learn you have ideas you didn’t know you had. Your LTE will need not only proofreading, but revising, probably repeated revising. To prevent gaffes, seek a second opinion. Especially when writing out of anger, have someone else check the tone. Sleep on it: I often see need for further revisions the next morning.

Sometimes an LTE can be dashed off quickly. But I can take several hours to craft an LTE. Five or six hours to reach tens of thousands of readers is well worth it. That’s thousands of hearts and minds for every hour of work. What better way to educate, agitate and organize?

In 2003 Ed spent five months in Iraq with Voices in the Wilderness.