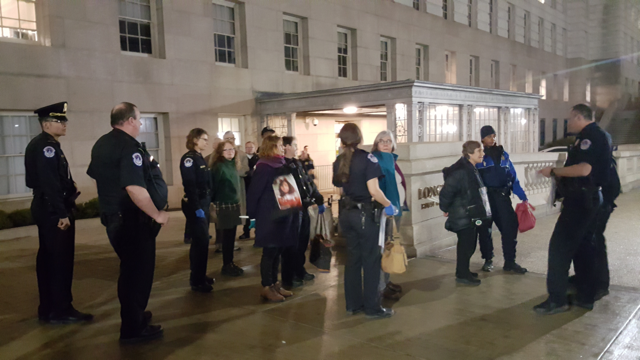 In a Washington, D.C. courtroom this past Tuesday, Voices’ Kathy Kelly and her fellow activist Richard Ochs accepted guilty pleas for their part in a January 2018 action at the D.C. office of House Minority Whip Rep. Steny Hoyer.  They had been protesting the devastating, ongoing three-year war on Yemen being waged with intense U.S. support by the U.S.’ client dictatorship in Saudi Arabia, in coalition with regional allies.  We present Kathy’s and Richard’s sentencing statements below, followed by an account of the initial arrest.

(Kathy asked that we hyperlink this American Conservative op-ed by Daniel Larison, decrying the Saudi coalition’s long-dreaded and apparently imminent bombardment of Yemen’s vital port of Hodeidah, an attack which (if not prevented) promises to throttle most of the humanitarian aid now reaching that famine- and epidemic-stricken country.  Bipartisan opposition to the Yemen war is shown to have been increasing by several nearly-successful U.S. Congressional votes, including the one which prompted Kathy’s and her fellow activists’ January action).

“On January 11, 2018, I was part of a delegation requesting Representative Steny Hoyer, the minority whip in the U.S. Congress, to help legislate an immediate end to U.S. participation in a Saudi-led coalition’s war against Yemen. The U.S. has sold cluster bombs, laser guided missiles, littoral combat ships, and other weapons to the Saudi-led coalition. U.S. jets refuel Saudi and Emirati warplanes in mid-air during bombing sorties. The paralyzing blockade and devastating airstrikes exacerbate suffering in Yemen, where Severe Acute Malnutrition afflicts 400,000 children. In January, UN officials said 8 million Yemenis faced starvation; Suspected cholera cases had reached one million.

“Yemeni children facing death by starvation and preventable disease pose no threat to U.S. people.  The food and clean water they hunger and thirst for could reach them, but not if elites continue to blockade Yemen’s ports, bomb roadways, destroy sewage and sanitation systems, attack fishermen and farmers, and use starvation and disease as tools of war.

“I concur completely with the statement by Kathy Kelly.

“Because constituents of Steny Hoyer were unable to obtain an appointment with Hoyer’s staff despite trying 8 times over two months last year, I volunteered to hand-deliver a letter signed by 10 constituents to Hoyer’s D.C. office.

“Two of us delivered that letter on December 15, and asked to speak to a staff person, but were refused. We were also refused a name, phone number and business card of a staff person. None of the 10 constituents who signed the hand-delivered letter received a reply from Hoyer’s office to this day, 5 months later.

“So when I visited Hoyer’s office with co-defendants one month after I delivered that ignored letter, I was prepared to stay in that office until we received a guarantee of an appointment. Not receiving such, I felt I was within my rights to assemble for a redress of grievances for as long as it took.”

Kathy and Richard were sentenced to time served, freeing Kathy for upcoming actions supporting the Kings Bay Plowshares in advance of their own trial, and delegation work with the Afghan Peace Volunteers. Five of Kathy’s fellow Hoyer office arrestees will go to trial this fall, with court dates set for Oct 2 and 3. 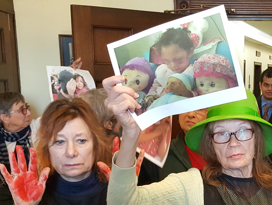 Seven activists, including Voices’ Kathy Kelly, were arrested Jan 11th for refusing to leave Rep. Steny Hoyer’s Washington DC office unless the Congressman (and House Minority Whip) committed to bring a vote on legislation to end the U.S.-Saudi war against Yemen.  Under intense bombardment and naval blockade, Yemen is poised to become the new century’s worst case of epidemic and famine; in the worst global famine year in the history of the UN.

The activists, convened by the National Campaign for Nonviolent Resistance, voiced three main demands: that Rep. Hoyer speak out against Saudi war crimes, that he condemn any further U.S. arms sales to the Saudi-led coalition bombarding and blockading Yemen, and that he help bring to a vote (and ensure much-needed debate on) House Resolution 81 invoking war powers to end U.S. involvement in the Yemen war.  (They also urged Rep. Hoyer to vigorously, publicly, reject President Trump’s cruel dehumanization of the world’s most desperate places as “s***hole countries”).

Arrested in the action were Kathy, Janice Sevre-Duszynska, Phil Runkel, Malachy Kilbride, Joy First, Alice Sutter, and Richard Ochs. Voices’ Brian Terrell had been arrested in a previous action coordinated by Witness Against Torture in Washington that day.

Below please find our friend Justin Alexander’s analysis of comparable Senate legislation capable of bringing the issue far more squarely before the American public, and, in his analysis, of ending the war:

Senate War Powers resolution on ending unauthorised US support for the war in Yemen –
A bipartisan Senate resolution on Yemen will be introduced in mid-January and has a good chance of passing. 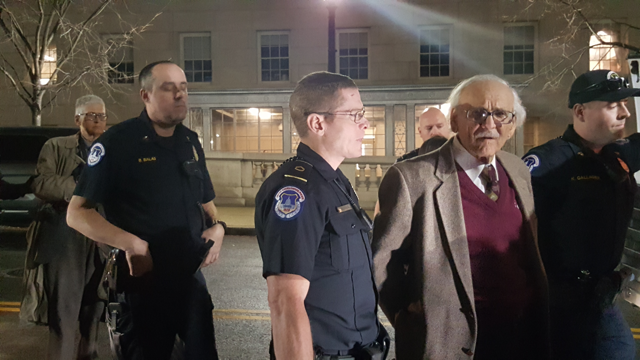