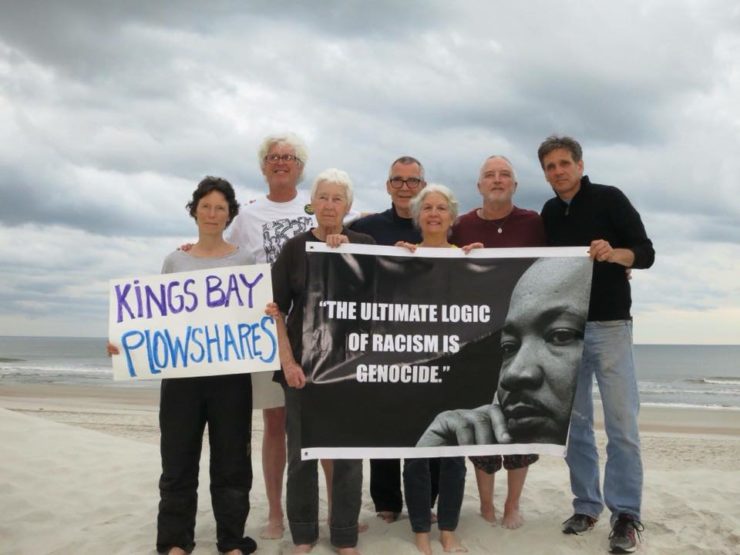 This coming week Kathy Kelly and Voices’ friends Steve Baggarly, Ken Jones and Beth Brockman will be among those participating in a June 18-22 “Hunger for Nuclear Disarmament” fast, urging exoneration for the “Kings Bay Plowshares 7” and voicing a global call for the long-awaited abolition of the United States’ nuclear weapons stockpile.

The fast will be held outside the nuclear submarine base in Kings Bay, Georgia where the Plowshares activists were arrested.  While fasting, participants will work to refine the route and logistics for a walk slated to begin September 3rd and to traverse the approx. 130 miles of road to the base from manufacturer General Dynamics‘ Savannah, Georgia offices.

On June 18, 2018, peace activists will begin a “Hunger for Nuclear Disarmament” fast at the Naval Submarine Base Kings Bay, at 10:00 a.m. at the Stimson Gate, in Kings Bay, GA, seeking abolition of all nuclear weapons and justice for fellow activists who await trial for an April 4th action of civil resistance at the base.

St. Marys, GA—On June 18th at 10:00 a.m. four peace activists in support of the Kings Bay Plowshares action will begin a five day fast and public witness at and near the Naval Submarine Base Kings Bay, calling for immediate abolition of the U.S. nuclear arsenal and public support for seven people, now awaiting trial, who acted to convert “swords into plowshares” through a plowshares action at the base. Kings Bay is home port to six nuclear armed Trident ballistic missile submarines with the combined explosive power of over 9000 Hiroshima bombs.

On June 19th the fasters will hold a public presence in front of the Glynn County Detention Center, 100 Sulphur Springs Road, in Brunswick, GA. They will be at the U.S. District Court at 801 Gloucester Street in Brunswick, GA on June 20th and 21st, and they will finish on June 22nd with a peaceful presence at the Kings Bay sub base.

At each site, beginning June 18, participants in the liquids only fast will distribute fliers and hold banners, one of which says, “Disarm Trident…Love One Another.” They will also hand out copies of the Treaty on the Prohibition of Nuclear Weapons, negotiated by 122 nations in July of 2017. The Kings Bay Plowshares action was the latest of 100 similar actions taken around the world since 1980 and the first plowshares action to take place since the global treaty banning nuclear weapons was signed.

Steve Baggarly, a former plowshares activist who will participate in the fast, said, “Most of the world is tired of being held hostage by omnicidal weapons and wants nuclear disarmament. The US and the 8 other nuclear powers who boycotted the Treaty negotiations are the outliers.”  Baggarly added that, “Our true national security lies in achieving the long overdue objective of nuclear disarmament.”  Fast participant Beth Brockman added, “Nuclear weapons are a theft from the poor. People here in Georgia and across the South are in desperate need of the resources squandered on the war economy.”

On April 4th, 2018, seven Catholic plowshares activists aimed to make real the prophet Isaiah’s command to “beat swords into plowshares.” Carrying hammers and baby bottles of their own blood, they hung banners, delivered an indictment and used crime scene tape at three sites on the Naval Submarine Base Kings Bay. Their call to “beat swords into plowshares” aims to eliminate all nuclear weapons and instead devote equivalent resources to meet human needs, end white supremacy, and alleviate environmental degradation.

The seven chose to act on the 50th anniversary of the assassination of the Rev. Dr. Martin Luther King, Jr., who devoted his life to addressing what he called the “triple evils of militarism, racism and materialism.”

More information about the Kings Bay Plowshares action can be found at their website: kingsbayplowshares7.org 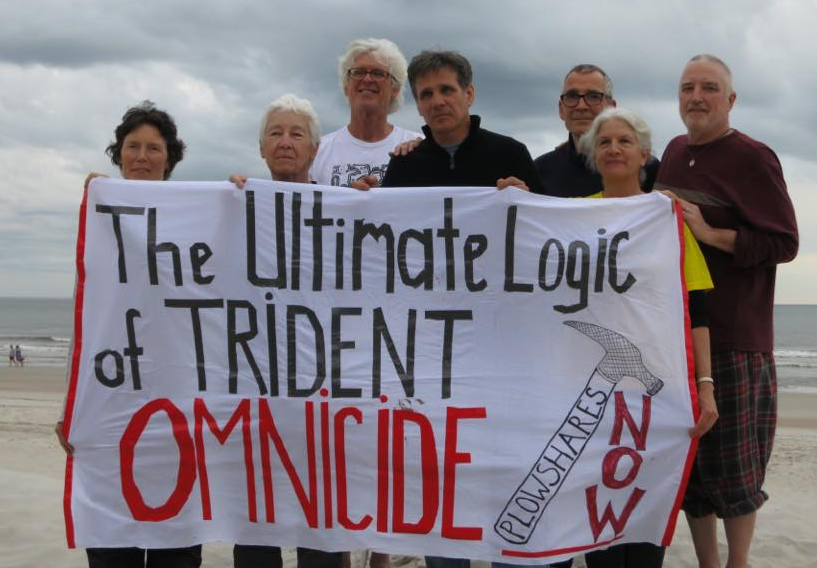