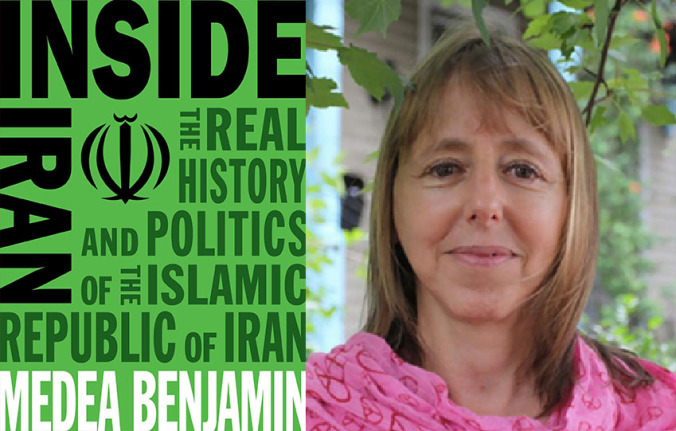 Inside Iran: The Real History of the Islamic Republic of Iran

Why is Donald Trump making peace with North Korea but on the warpath with Iran? What can we do to stop another Middle East war? Medea Benjamin, with her new book Inside Iran: The Real History and Politics of the Islamic Republic, recounts Iran’s history from the pre-colonial period, through the CIA-engineered coup that overthrew the country’s democratic leadership in 1953, to its emergence as the one nation Democrats and Republicans alike regularly unite in denouncing.

Benjamin draws upon her firsthand experiences with Iranian politicians, activists, and everyday citizens to provide a deeper understanding of the complexities of Iranian society.. She tackles Trump’s accusations of Iran’s “meddling” in the region and its export of terrorism, looks at the consequences of the US withdrawal from the Iran nuclear deal, and sketches out possible future scenarios and ways we can support the Iranian people.

Medea Benjamin is the co-founder of the women-led peace group CODEPINK and the co-founder of the human rights group Global Exchange. She has been an advocate for social justice for more than 40 years. Described as “one of America’s most committed — and most effective — fighters for human rights” by New York Newsday, and “one of the high profile leaders of the peace movement” by the Los Angeles Times, she was one of 1,000 exemplary women from 140 countries nominated to receive the Nobel Peace Prize on behalf of the millions of women who do the essential work of peace worldwide.

She is the author of nine books, including Drone Warfare: Killing by Remote Control and Kingdom of the Unjust: Behind the U.S.-Saudi Connection, and her articles appear regularly in outlets such as The Huffington Post, CommonDreams, Alternet, The Other Words, and TeleSUR.