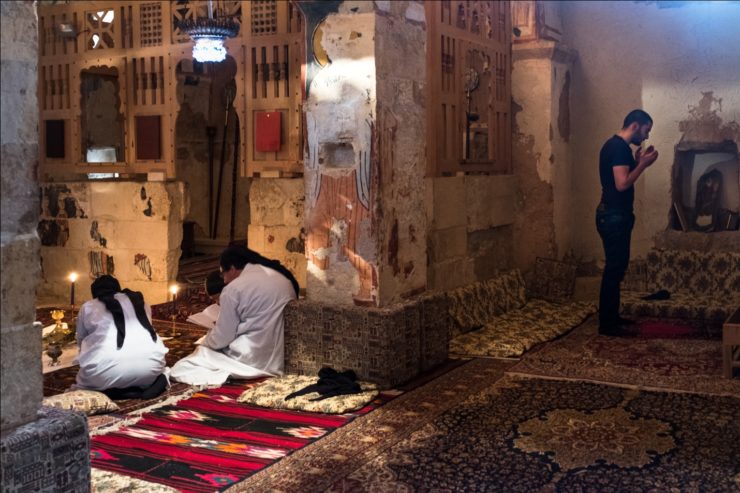 New York — A few days ago I received a copy of the Plough (Quarterly Summer issue), a publication of the Bruderhof Community, cherished and known to us for some decades now.  In a time of quiet reflection the morning after receiving the Plough, I randomly opened the publication to a double-paged colored photo of a chapel in a monastery in Syria.  For a moment, my heart stopped as I recognized this holy place, so dear to me and countless others!

“The image is remarkable,” the article began.  “ On Good Friday [2018], photographer Cecile Massie was sitting in the chapel at the monastery of  Deir Mar Musa in the heart of  Syria, observing the monastic community at prayer, when a young Muslim visitor slipped in, carrying his prayer rug.  He sought out a discreet corner of the chapel, turned towards Mecca, and began to pray.”  Cecile was able to take this picture allowing us “to peer into this moment of intimacy, carried out in a country seven years into war; of a Muslim and Christians praying in a remote church together, each in their own tradition—a moment that might have otherwise been lost to history and witnessed only by God.”

Just about a week ago the Supreme Court ruled that Trump’s travel ban is constitutional.  In New York, I joined hundreds of protestors at Foley Square on June 26th.  One of the speakers was a young Syrian woman, a refugee whose father was killed a month ago in Damascus.  She said that the U.S. has allowed only 11 Syrians into the country in 2018.  That is right, you read correctly.  Eleven.

I had to force myself to go to the protest.  It is all too much for me.   As Ms. Saldana writes “I fear that most of us—myself included—have become used to this violence.  We speak of the dead with the same nonchalance we once reserved for the weather, or traffic that might inconvenience us on the way to work. When a priest I know was recently asked about the situation in the region, he answered with shocking honesty: ‘We are sleepwalking towards disaster.’”

For about five consecutive years I traveled to Syria, as well as Jordan, to witness the plight of Iraqi refugees there.  I lived in, and fell in love with, the old city of Damascus.  But also with the people.  On occasion I wrote about my trips to this monastery. And I traveled to Aleppo which is in ruins now.

Since 2012 we have been able to return to Iraq, and my heart and mind is full of the ongoing violence and war there, hearing first-hand stories of kidnappings and people, as in Syria, having to flee for their lives to neighboring countries.  Dear friends of ours left everything behind in Baghdad a month ago, to find refuge in Turkey.  They now join the almost 4 million refugees there.  Their oldest two boys were kidnapped over a year ago.

I want to end by once again quoting Ms. Saldana.  “The monks and nuns of Deir Mar Musa, a Christian monastic community dedicated to dialogue with Islam, only exist in the photo at all because they, at great risk to their lives, decided to remain in Syria throughout the war.  Father Jaques Mourad, a Syrian priest and member of the community, wrote about the renewed significance of wartime dialogue in a letter in 2014. ‘Right now, the kind of dialogue we’re experiencing is our shared suffering as a community.  We are sorrowing as a community.  We are sorrowing in this unjust world, which bears a share of the responsibility for the victims of this war, this world of the dollar and the euro, which cares only for its own citizens, its own wealth, and its own safety while the rest of the world dies of hunger, sickness, and war…The true dialogue we are living today is the dialogue of compassion.”

Ms. Saldana and Ms. Massie, I thank you for helping me to find hope again through your words and powerful imagery.

Cathy Breen volunteers with the NYC Catholic Worker and Voices for Creative Nonviolence.  Her email is newsfromcathy@gmail.com