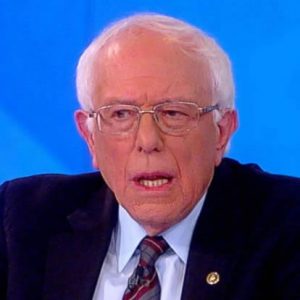 David Swanson of World Beyond War sent out this open letter today in advance of a Senate vote on Senator Sanders’ bill to suspend direct U.S. troop involvement in the war on Yemen.   People wishing to sign the letter can go to worldbeyondwar.org/bernie.

We write to you as U.S. residents with great respect for your domestic policies.

We support the position of more than 25,000 people who signed a petition during your presidential campaign urging you to take on militarism.

We believe that Dr. King was correct to assert that racism, extreme materialism, and militarism needed to be challenged together rather than separately, and that this remains true.

We believe this is not only practical advice, but a moral imperative, and — not coincidentally — good electoral politics.

During your presidential campaign, you were asked repeatedly how you would pay for human and environmental needs that could be paid for with small fractions of military spending. Your answer was consistently complicated and involved raising taxes. We believe it would be more effective to more often mention the existence of the military and its price tag. “I would cut 4% of spending on the never-audited Pentagon” is a superior answer in every way to any explanation of any tax plan.

Much of the case that we believe ought to be made is made in a video posted on your Facebook page in early 2018. But it is generally absent from your public comments and policy proposals. Your recent 10-point plan omits any mention of foreign policy whatsoever.

We believe this omission is not just a shortcoming. We believe it renders what does get included incoherent. Military spending is well over 60% of discretionary spending. A public policy that avoids mentioning its existence is not a public policy at all. Should military spending go up or down or remain unchanged? This is the very first question. We are dealing here with an amount of money at least comparable to what could be obtained by taxing the wealthy and corporations (something we are certainly in favor of as well).

A tiny fraction of U.S. military spending could end starvation, the lack of clean water, and various diseases worldwide. No humanitarian policy can avoid the existence of the military. No discussion of free college or clean energy or public transit should omit mention of the place where a trillion dollars a year is going.

Militarism is the top source of the erosion of liberties, and top justification for government secrecy, top creator of refugees, top saboteur of the rule of law, top facilitator of xenophobia and bigotry, and top reason we are at risk of nuclear apocalypse. There is no area of our social life that is untouched by what Eisenhower called the military industrial complex.

Even candidate Trump declared the wars since 2001 to have been counterproductive, a statement that appears not to have hurt him on election day.

A December 2014 Gallup poll of 65 nations found the United States to be far and away the country considered the largest threat to peace in the world, and a Pew poll in 2017 found majorities in most countries polled viewing the United States as a threat. A United States responsible for providing clean drinking water, schools, medicine, and solar panels to others would be more secure and face far less hostility around the world; that result would cost a fraction of what is invested in making the United States resented and disliked.

Economists at the University of Massachusetts at Amherst have documented that military spending is an economic drain rather than a jobs program.

We compliment you on your domestic policies. We recognize that the presidential primaries were rigged against you, and we do not wish to advance the baseless idea that you were fairly defeated. We offer our advice in a spirit of friendship. Some of us worked in support of your presidential campaign. Others of us would have worked, and worked hard, for your nomination had you been a candidate for peace.

Jeff Cohen, Founder of FAIR and co-founder of RootsAction.org

Charles Glass, author of They Fought Alone: The True Story of the Starr Brothers, British Secret Agents in Nazi-Occupied France

David Lotto, Psychoanalyst, Editor of the Journal of Psychohistory

Michael Nagler, Founder and President, the Metta Center for Nonviolence

Carol A. Paris, MD, Immediate Past President, Physicians for a National Health Program

Miko Peled, author of The General’s Son: Journey of an Israeli in Palestine

David Swanson, Director, World BEYOND War; Advisory Board Member, Veterans For Peace; author of War Is A Lie

More names are being added: https://worldbeyondwar.org/bernie