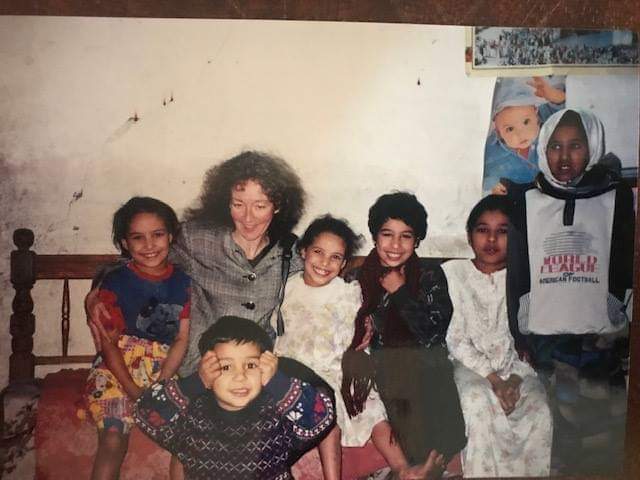 Twenty years ago today on December 16, 1998 Pres. Bill Clinton launched Operation Desert Fox, an illegal, unjustified military attack on Iraq in which the US attacked 100 targets with cruise missiles. I traveled to Iraq in the middle of the bombing to witness its effects on an emergency delegation of Voices in the Wilderness.

The attacks took place after seven years of US-backed UN sanctions on Iraq had led to the deaths of at least 500,000 Iraqis, mostly children and the elderly. In 1998 the UN official in charge of the Oil for Food program (a scandal plagued program that in theory allowed Iraq to import vital foodstuffs), Denis Halliday, resigned, charging that the sanctions were genocidal.

The US had been unilaterally bombing Iraq on a regular basis throughout the 1990s, ostensibly to enforce a US-declared no-fly zone over Southern Iraq (which then UN Secretary General Boutros-Boutros Ghali declared illegal), killing hundreds of civilians. The illegal attacks were so routine that US media accounts rarely mentioned them.

In December 1998, The Clinton Administration justified the bombing campaign of Iraq by charging that Saddam Hussein was failing to fully cooperate with the UN weapons inspection program UNSCOM, a charge rejected by UNSCOM itself. We now know that UNSCOM had largely succeeded in dismantling Iraq’s WMD programs and weapons, but at the time both Republicans and Dems claimed that Saddam continued to develop WMDs.

The White House ordered UNSCOM inspectors withdrawn and began bombing Iraq from December 16-19, 1998, to general media praise about the precision of US cruise missiles (for a rare critique see https://www.thenation.com/article/bombing-iraq/).

I was a third year grad student at Northwestern when the bombing started and had already been to Iraq once. Kathy Kelly, founder of Voices in the Wilderness, told me she would be leaving for Iraq the next day on an emergency delegation and asked me if I wanted to come. Much to my parents’ horror I said yes. A Palestinian couple gave us the tickets to Amman, Jordan that they had been planning to use to go see their family for Christmas. We left on December 17.

In Amman, Jordan late on the night of December 18 Kathy and I went shopping. A crowd of outraged Jordanians surrounded us in a store, demanding to know why we were bombing and starving the people Iraq. After a few minutes of this one of the men who had been yelling welcomed us to Amman and we explained why we were there. He put Kathy and I in the car with his wife and infant and drove us all over Amman for the rest of the night, buying our supplies and refusing to let us pay for them.

Early on the morning of the 19th we left during a pause in the bombing, racing the 12 hours overland from Amman to Baghdad. We arrived thinking the bombing was over, and visited a family near the hotel, before hearing and feeling the thuds of cruise missiles landing nearby.

Kathy and I watched US cruise missiles landing around Baghdad from the roof of our hotel, as Iraqi anti-aircraft fire ineffectually lit up the night sky and the hotel intercom played the Clinton impeachment hearings on the BBC. There was no greater expression of the pathology of US politics than listening to Republicans excoriate Clinton for lying about an affair while they uniformly cheered his illegal attack on Iraq.

We walked across the road to the Hotel Palestine (the US bombed the hotel in 2003, killing several journalists) to get some news and walked into the bar. “We are from the US, and we are sorry our President is bombing your country.” The Iraqi men at the bar laughed and slid a pack of cigarettes toward us.

The next day we toured Baghdad to survey the damage and visit the wounded in nearby hospitals. The US attacked about 100 targets with cruise missiles, including a defense ministry building next to the largest maternity hospital in Baghdad. All the windows in the hospital were blown out by the force of the blast, forcing doctors and nurses to evacuate all of the patients in the middle of the attack. Some spontaneously went into labor, and a few involuntarily aborted their pregnancies. We saw many people in local hospitals with shrapnel wounds. No one knows how many people did. The US press couldn’t even be bothered to ask.

We knew we had a limited time to get the attention of the global press before they left Baghdad, and hoped to show that while Operation Desert Fox was over, the real war against the civilian population of Iraq in the form of sanctions was continuing. So Kathy and I crashed press events and held guerilla actions at Iraqi ministry buildings to talk about the sanctions.

On December 24 we organized a press conference outside of the destroyed Baghdad maternity hospital with doctors standing in for wise men, offering gifts of medicine, medical journals, and pencils, all banned by the sanctions. A group of Iraqi children accompanied us, many from a local Catholic girls school, to whom Kathy and I had taught a few verses of the civil rights anthem “We Shall Overcome” the previous day.

We told the children of a time in US history when people with no power and no weapons used music as a shield against fear and despair, and talked about the meaning of the song, while our driver translated the lyrics. “We are not afraid”; “We’ll walk hand in hand”. It was amazing.

We managed to meet the great NYT journalist @stephenkinzer and we introduced him around Baghdad, taking him with us to meet doctors, engineers, and others who talked about life in Iraq. Kinzer wrote an amazing three part series on the sanctions, the only sustained reporting the Times ever did until 2003.

That Christmas Eve Kathy and I attended services at a nearby church. The priest draped the table with a poster of Picasso’s famous antiwar painting Guernica. He titled his sermon “The Baby and the Bomb” and speculated about the fate that the Christ child would have met had he been born in Baghdad.

Iraqis were unfailingly kind to Kathy and I, undeservedly so given the death and destruction the US was visiting on their country. One day while walking back to our hotel from an interview a car pulled up and an Iraqi Republican Guard officer ordered me inside at gunpoint. I sat in the back between two soldiers with automatic weapons while the officer threatened to kill me and asked if I worked for the CIA.

After handing him a flyer that Kathy and I had written (in both English and Arabic) about why we were there, and after driving around town for what seemed like an eternity, wondering if I was going to die, the atmosphere inside the car changed. The officer asked if I could help him get medicine for his daughter, dying of a respiratory infection. The soldiers next to me told me of the family members who had died or were dying from cholera, pneumonia, and other diseases that could be treated with a $.05 antibiotic, available just over the border in Amman, but another world away. They eventually dropped me back at the hotel, with smiles and waves, thanking me for coming to Iraq and imploring me to tell the world what I had seen.

On Christmas Eve day I took a ride in the most decrepit taxi I had ever seen – with gaping holes in the floor covered with cardboard and a driver literally dressed in rags. “I love your country but hate your foreign policy,” the driver offered as I explained what I was doing in Baghdad, before telling me about his children, both suffering from malnutrition and one desperately ill from a respiratory infection. Ashamed, I offered him all the money I had on me – perhaps $100 – and begged him to take it so he could buy food for his family. “I cannot accept your money, Mr. American,” he replied, with shocking dignity and grace. “But I want to thank you for coming to Iraq to help our people, and wish you a merry Christmas.”

We left shortly after Christmas and I returned home. Kathy Kelly continues to do extraordinary work as (for my money) the most important nonviolent activist of the last quarter century, and I continued avoiding my dissertation. I think about that trip a lot, mostly about the extraordinary forgiveness and goodwill shown to us by ordinary Iraqis who could tell the difference between the US people and its foreign policy.

So many folks now look back on the Clinton era as some sort of golden age of US foreign policy and politics. it was not. Clinton’s policies in Iraq paved the way for the US invasion in 2003 and for the disintegration of the country that followed. Its easy now, in the context of Trump, to sneer at the impeachment of Clinton over a sexual scandal. i don’t. Bill Clinton deserved to be impeached. Just not over sex. 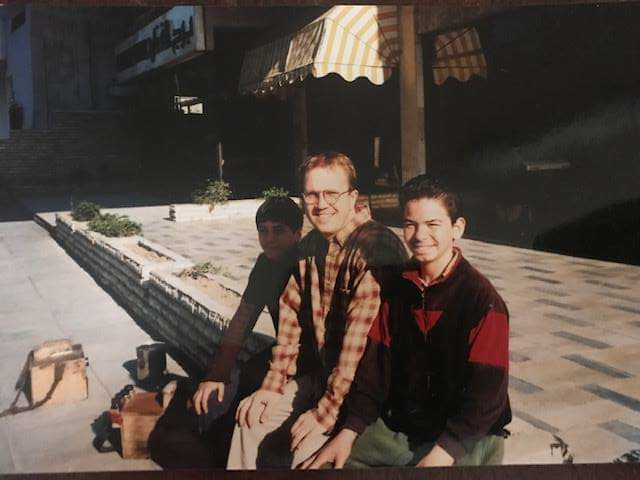 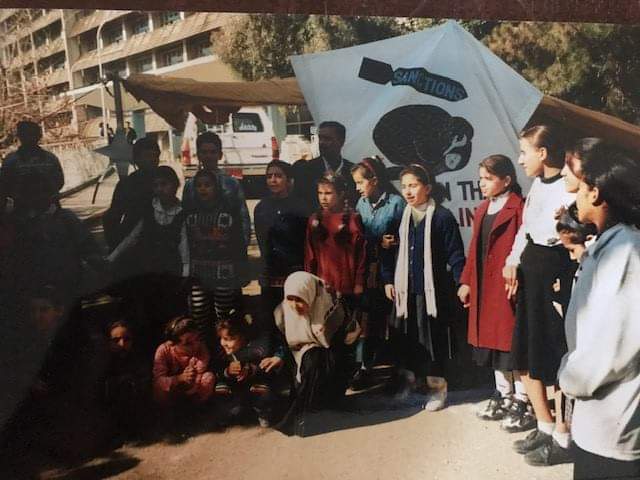 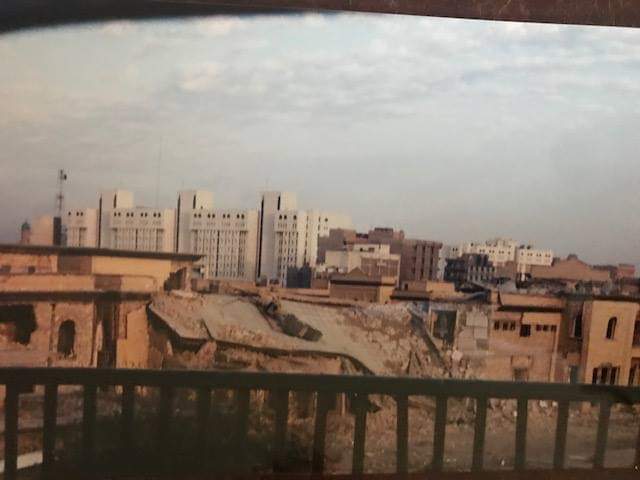 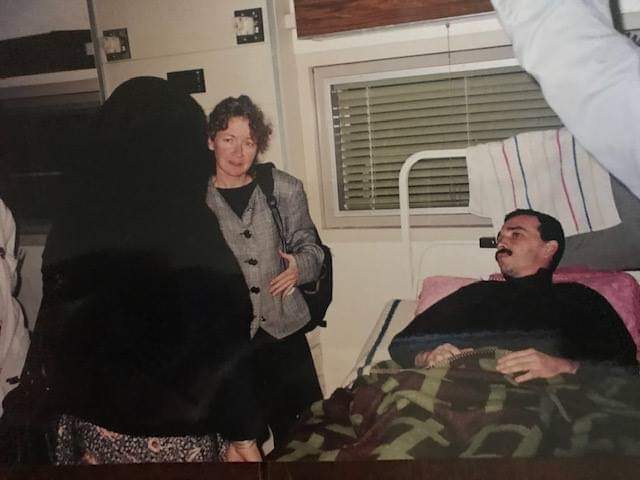 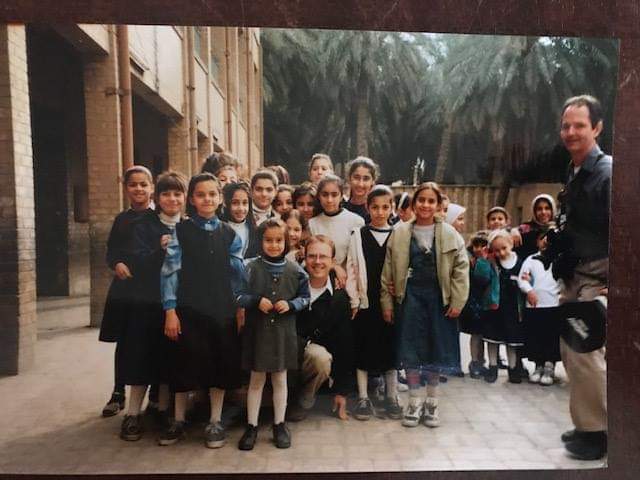 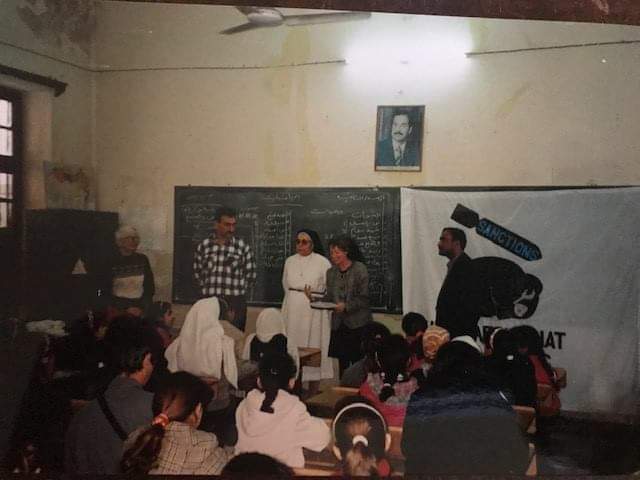 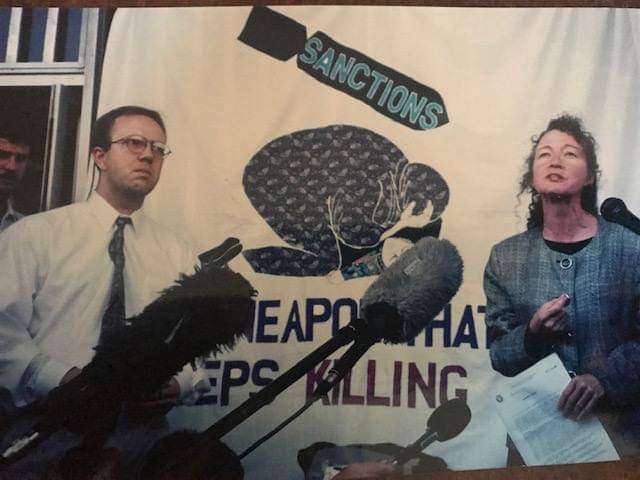 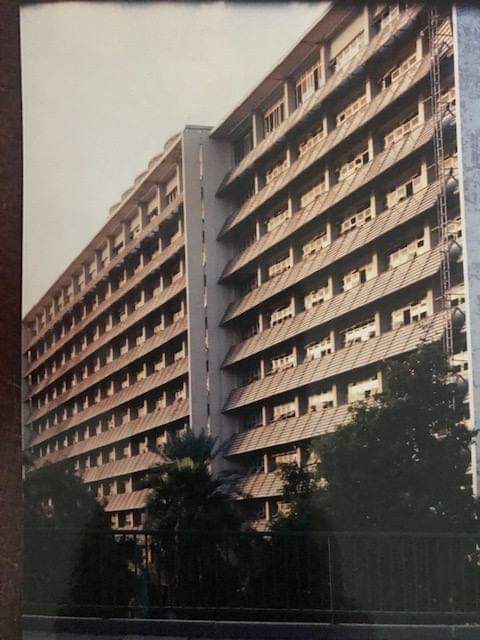