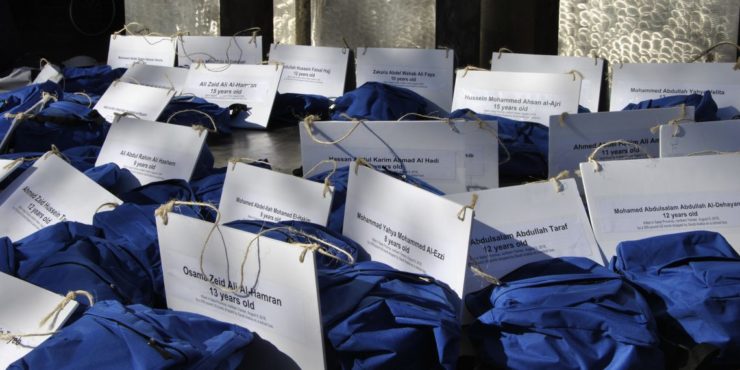 PRESS RELEASE   For Immediate Release: December 28, 2018
TWO-WEEK FAST CALLS FOR AN END TO WAR IN YEMEN AND DRAMATIC MEASURES TO AVOID FAMINE;
PARTICIPANTS BEGIN IN NYC AND END IN DC.

At least twelve people from around the United States and the United Kingdom will undertake a Fast for Yemen, December 29 – January 12, beginning in New York City and closing in Washington, D.C. Participants call for sustained measures to cease all hostilities, end weapon sales to any of the warring parties, protect supply lines, facilitate aid operations, stabilize the Yemeni economy and avoid famine.

While fasting from all solid foods, they will engage in daily public outreach, following the schedule below. In NYC, they will carry placards, along with bookbags symbolic of war waged on Yemeni children, as they process to Missions to the UN and consulates of countries which are among the warring parties in Yemen, including the United States, the UK, Saudi Arabia, the United Arab Emirates, and Qatar.

The Jan 6 – Jan 12th Witness Against Torture fast is an annual event calling for the closure of the U.S. prison in Guantanamo and calling attention to illegal detention, torture and police abuse in the U.S. and abroad. This year’s fast will pay special attention to Yemeni prisoners held in Guantanamo for years without charges; to operation of “clandestine” prisons in Yemen; and to consequences in Yemen of aerial bombardment, ground attacks, and the blockade. In D.C., fasters will be participating in scheduled events including demonstrations at U.S. governmental offices, and at embassies representing countries among the warring parties in Yemen.

A naval and aerial blockade sporadically permitting relief shipments was made worse this year by the long-dreaded attack on Yemen’s vital relief port of Hodeidah; meanwhile a systematic bombing campaign against Yemen’s economic infrastructure means that even where food is available, fewer and fewer desperate Yemenis can buy it.

The Saudi leader is on record claiming “time is on our side” as the humanitarian crisis, already causing one of the modern era’s worst cholera outbreaks, further weakens opposition. Houthis governing from Yemen’s capital in turn insist outrage at an ongoing famine will defeat the attack. The direct death toll solely due to military attack, rising by 2,000 a month, will soon total 60,000 Yemenis.

Fast participants call on all parties in this conflict to immediately and permanently end all military and economic assault on Yemen.

The list below, still in formation, names those committed to fasting in New York from December 29 to January 6. The second week of the fast will take place in Washington, D.C. Listed also are three fasters who will participate in both weeks, but remain in their own locales.