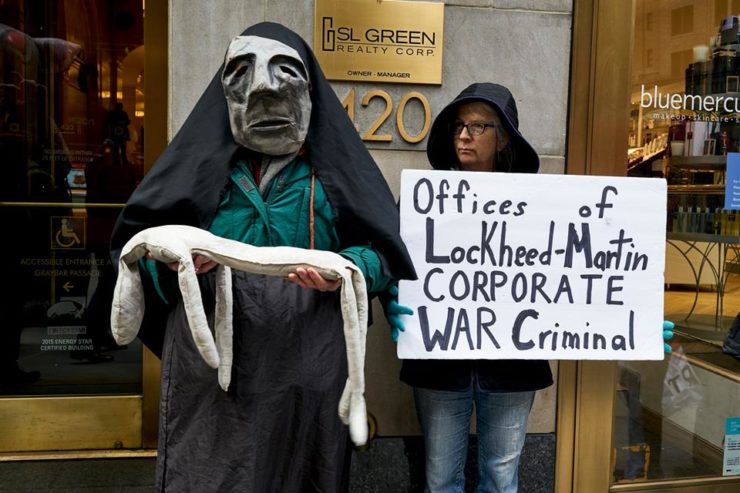 Voices for Creative Nonviolence activists returned to New York City to join with friends from the Catholic Worker, Veterans for Peace, the Granny Peace Brigade and Rise and Resist to continue our witness demanding an end to the war and blockade of Yemen in the streets, at the doors of complicit governments and corporations and in court. Photos by Marty Rajandran, Felton Davis, Bud Korotzer and George De Castro Day.

Procession from the Isaiah Wall across from the United Nations to the unmarked corporate offices of Lockheed Martin on Lexington Avenue, labeling that corporation as “COMPLICIT IN WAR CRIMES WITH THE UNITED STATES AND SAUDI ARABIA,” our message, “HOLD LOCKHEED MARTIN ACCOUNTABLE!” 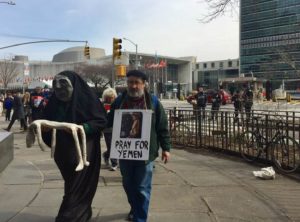 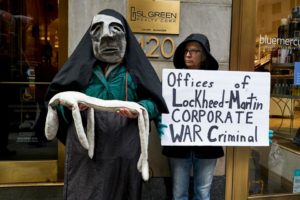 “On August 9, 2018, A Saudi Air Force jet dropped a 500-pound laser-guided bomb made by Lockheed Martin on a school bus, killing more than 40 children aged six to eleven and their teachers. Blue backpacks that UNICEF had given to each of the children were found in the wreckage from the bus, along with bomb fragments and body parts. 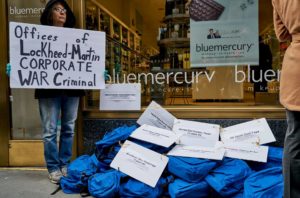 “The bomb was one of many thousands sold by Lockheed Martin to Saudi Arabia as part of a $110 billion arms package negotiated by President Trump. Lockheed Martin CEO Marillyn Hewson refuses to take responsibility for Lockheed’s role as a profiteer in the war in Yemen, a war that has been called ‘the world’s worst humanitarian crisis,’ insisting that the company does not sell weapons to Saudi Arabia at all- ‘We don’t sell to them, we sell to the [U.S.] government, and then the government sells to a country,’ she said.” From the leaflet distributed on February 22 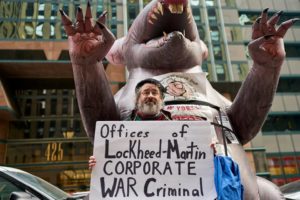 “The marvelous rabble at it again.” Vigil for Yemen, the weekly gathering at Union Square each Saturday from 11 AM to 12:30, sponsored by the New York Catholic Worker. 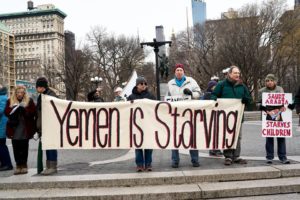 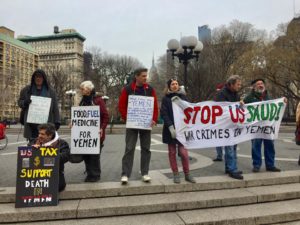 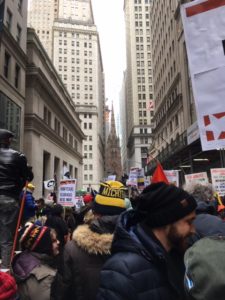 After the vigil for Yemen, some of us went down to the Trump Building at the heart of Wall Street, to join a crowd protesting the economic warfare and threats of attack on Venezuela.

In the morning, Kathy Kelly and Brian Terrell met with the congregation of Judson Memorial Church, a congregation with a long history of advocacy for social action and solidarity with the oppressed. 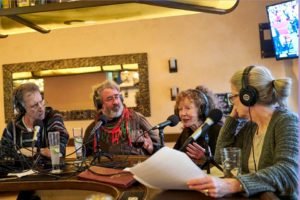 In the afternoon, at Gabriella’s Tequila Bar to record a pod cast with Rebecca and Alan for Bar Crawl Radio, discussing the urgent crisis in Yemen and the influences and experiences that led two activists to resistance. 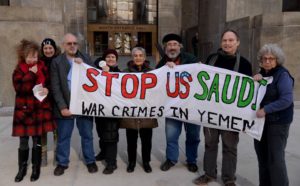 In the morning, eleven participants in the “Fast for Yemen” who had been arrested on January 2, appeared in New York City Criminal Court. Blocking the entrances of the United States Mission to the United Nations resulted in charges of disorderly conduct that the court “adjourned with contemplation of dismissal.” “Stay out of trouble,” the judge admonished us. Fortunately, we have better advice from better mentors. 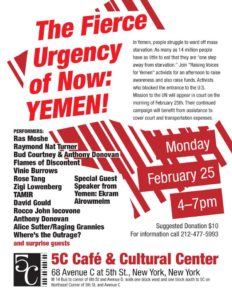 In the evening, “The Fierce Urgency of Now: Yemen!” at the 5C Café and Cultural Center on Avenue C and 5th Street, called “Vigil for Yemen comes to Alphabet City” by George De Castro Day, who reports: 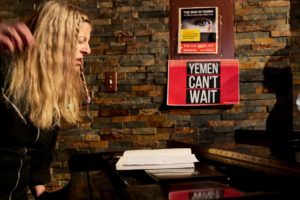 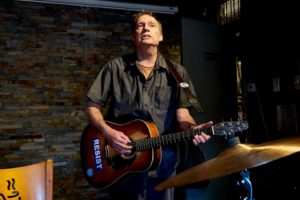 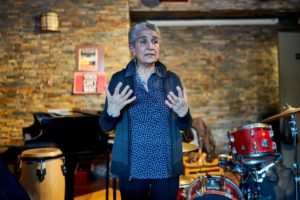 “Manijeh Saba was recently arrested twice, at the US mission blockade in NYC and at the Supreme Court, in DC, for speaking out against the war in Yemen and torture and detentions in Guantanamo. Her story of arrest and attempted interrogation in the basement of the Supreme Court is harrowing.” 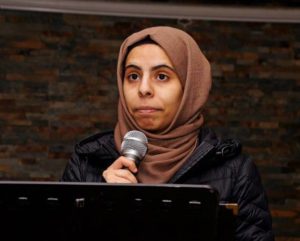 Ekram Alromeim shared a personal story from a Yemeni friend 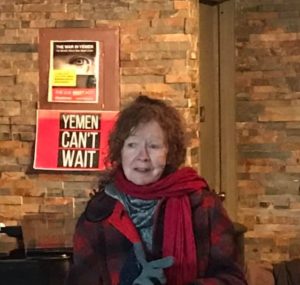 “Kathy Kelly reminds us that the US has increased bullet exports to Afghanistan eightfold over the previous year, all the while participating in wars or rattling sabers from Venezuela to Yemen.” 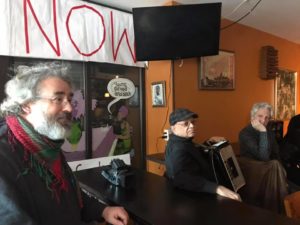 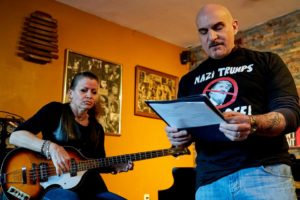 “There is work to be done, but this is good company. Great afternoon of song, stories, and resistance.” 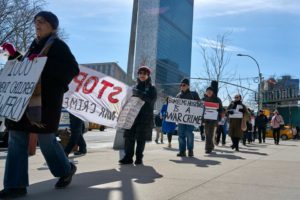 Return to the consulates of Saudi Arabian and the Kingdom of Bahrain, 866 2nd Avenue. 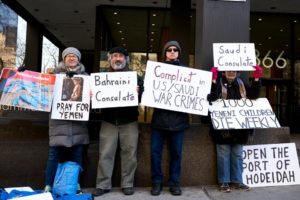 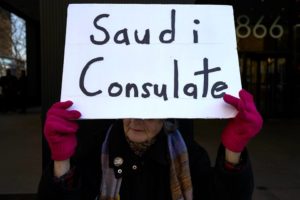 “This is all it takes to mark these unmarked buildings that host war criminals: A piece a cardboard, a magic marker, and a little patience and endurance on a cold day. From Lockheed Martin to the Saudi Consulate, you would never know what entities operate out of some of these places.” George De Castro Day 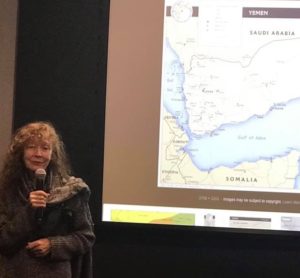 “Brian and Kathy spoke at Rise and Resist tonight. It was a packed night with lots of ground to cover, but everyone wished there had been more time. Important information, ideas, and inspiration were shared by all. Solidarity, folks, solidarity. We’re all in this together.”