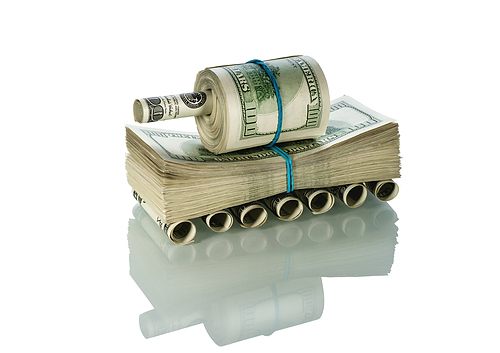 This article first appeared in the Cedar Rapids Post Gazette.

Have we become a welfare state for the military-industrial complex?  In August, 2018, Congress passed the Fiscal Year 2019 National Defense Authorization Act (NDAA) with overwhelming bi-partisan support.  It authorized a whopping $717 BILLION in military expenditures, a $98 Billion increase over the 2017 NDAA.   Only ten senators voted against this bill, and neither of Iowa’s two senators was among the ten.

Why is this important?

First, and most easily understood, is that the FY 2019 military budget translates into about $2,200 per person in the United States.  Repeat, $2,200 per person.  Of course, that is not proportionally reflected in the taxes that we pay.  This gargantuan expenditure is mostly funded by new Federal debt.  The deficit for FY 2018 was $782 billion, and is projected to be  over $1 trillion in FY 2019.  So, we will let our grandchildren carry that burden.

Second, with funding for the military consuming 58% of total Federal discretionary spending, all other programs are suffocated.  For example, military funding is 81.5 times more than the budget for the Environmental Protection Agency.    Funding for transportation, mental health, food safety, education, and many other programs are cut, while the Pentagon goes unaudited and military contractors get rich.  (Most generals, when they retire, go to work for military contractors or consultants and get richer.)

Third, the only possible legal and moral justification for our huge military establishment would be that it is defending our country from enemies outside our borders.  However, we have not fought a war of defense since World War II.  In the past 18 years we have spent six trillion dollars on our wars in Iraq and Afghanistan and numerous other conflicts.  All of those were wars of intervention in the affairs of other countries, where the safety of this country was not under threat.   Rather than a defender of freedom, the United States has become the bully of the world.  That is immoral and un-American.

First of all, we must become informed.  As Thomas Jefferson said, “an informed citizenry is at the heart of a dynamic democracy.”  Next, we ought to become angry —  very angry– and we must focus our anger on change rather than let it fester.   We in Iowa have the unique opportunity to influence whether our country takes the direction of peace or war.  Presidential candidates are streaming through Iowa, and each should be confronted with the hard questions we have raised here.    With only a couple exceptions, they will avoid the issue, unless pressed.  In addition, each of our two senators in Washington, D.C., has a powerful voice and unique background in military waste.  We must tell them that NOW is the time to rein in military spending and to begin encouraging peaceful solutions.

We have become a welfare state for the military-industrial complex.   We must not silently entrust our financial and moral capital to the tools of war, and we must not ignore our better angels’ calls for personal and societal investment in peace.

Ed Flaherty is a member of Veterans for Peace in Iowa City.