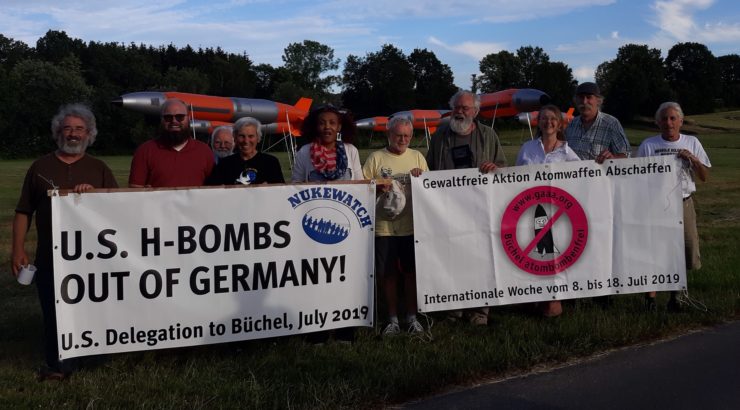 A delegation of 11 peace activists from the United States arrives at a German peace camp Friday July 5 to join protests against the deployment of US nuclear weapons there.

The delegation, coordinated by the group Nukewatch in Wisconsin, joins the “International Action Camp” focused on Büchel Air Base, the site of scores of protests for over 20 years because it is home to the US Air Force’s 702nd Munitions Support Squadron and its “protection level 1 stockpile” of approximately 20 US B61 hydrogen bombs.*

The US delegation is third in three years to join the campaign to rid Büchel of the US Air Force’s nuclear weapons, the last remaining in Germany.

An annual event coordinated by the German peace group Nonviolent Action for Abolition of Nuclear Arms (GAAA), International Action Camp is modeled after efforts that ousted nuclear-armed US Pershing and Cruise missiles from Germany in the 1980s. During the camp from July 7 to 16 (https://buechel-atombombenfrei.jimdo.com/international/international-action-camp/), the delegates — from Georgia, Montana, California, Tennessee, Arizona, and Wisconsin — will join colleagues from Germany, The Netherlands, the UK, Austria, and a group of student peace workers from around the world.

The delegates share a shocked alarm over U.S. military production of a new B61 H-bomb (version 12) and its plans to replace the B61s now at Büchel and at NATO air bases in Italy, Belgium, The Netherlands and Turkey. Production of the B61-12 has been delayed recently by faulty components. The United States is the only country in the world that deploys its nuclear weapons in other countries.

“In view of the 2017 treaty ban, it’s clear the world wants to abolish nuclear weapons,” said John LaForge, coordinator of the delegation for a third time, and a staff member with the nuclear watchdog group Nukewatch, in Wisconsin, referring to the UN General Assembly vote to adopt the Treaty on the Prohibition of Nuclear Weapons. “To spend tens of billions replacing the B61s instead of eliminating them, when tens of millions need disaster relief, food aid, housing, and medical care, is a criminal waste,” LaForge said.

The action camp is one of dozens of protests against Büchel’s US weapons which began March 26 and continue to August 9. Anti-nuclear activists with Germany’s nation-wide campaign council “Büchel is Everywhere! Nuclear Weapons-Free Now!” launched the 20-week-long series of nonviolent protests four years ago. The council is a coalition of 68 peace and justice organizations that have embraced nonviolent civil resistance at the base in order to achieve: 1) the withdrawal of the US nuclear bombs; 2) cancellation of replacement plans for the B61 bombs; and 3) Germany’s adoption of the 2017 Treaty on the Prohibition of Nuclear Weapons. The actions continue through August 9, the 74th anniversary of the US atomic bombing of Nagasaki, Japan in 1945.

Under a NATO policy called “nuclear sharing” the five NATO governments that deploy the U.S. B61s claim that their nuclear cooperation does not violate the 1970 Treaty on the Non-Proliferation of Nuclear Weapons. Articles I and II of the treaty prohibit nuclear weapons from being transferred to, or accepted from, other countries.

Germany’s Tactical Air Force Squadron 33 at Büchel carries out the formal “nuclear sharing agreement” between the United States and Germany,* reportedly using its PA200 Tornado fighter jets to practice flying the US bombs to target areas for detonation in the event of an order from the White House.