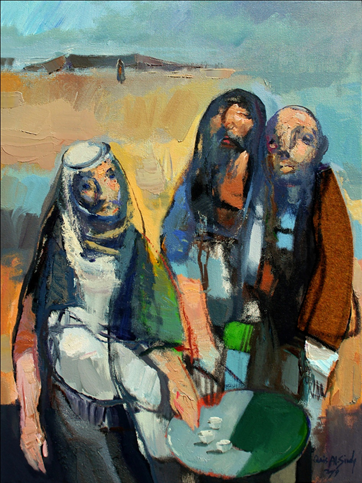 “The point is, art never stopped a war…That was never its function.  Art cannot change events.  But it can change people.  It can affect people so that they are changed—they then act in a way that may affect the course of events…by the way they behave, the way they think.” (Leonard Bernstein, composer and conductor)

A 20-month tour of Caravan’s exibition “ABRAHAM: out of one, Many” has begun.  One of the  participating artists is Qais Al Sindy,  a dear friend.  He came to us last week from the US premiere of this ground-breaking peace-building exhibition in Omaha, Nebraska, following Rome, Paris and Edinburgh. The exhibit features three celebrated artists: one Jewish, one Muslim and one Christian.  (please see oncaravan.org for more details)

One morning Qais and I sat across the table from each other having breakfast.  I was fascinated about the “Abraham” art project.  I had recently received the news of the sudden tragic death of a close young woman friend, an Iraq refugee, and felt in desperate need for signs of hope.  I asked him to tell me more.   Originally from Baghdad, Qais now lives in California with his wife and three children.  He also came as a refugee to this country.

“When I was young” Qais began, “my father told me about his father.” There was a busy wholesale market area in Baghdad where his grandfather worked.  His grandfather was Christian and his neighbors were Jewish and Muslim.  They would go to the market very early in the morning and have breakfast together.  Iraqis like scrambled eggs for breakfast, something to which I can attest. But, Qais continued, they would get three eggs, sunny side up, and eat from the same plate, dipping their bread into the eggs.

“Can we do that now?” Qais asked. “Share the same food?  Three different faiths?”

Qais has a friend from Nazariah (near the ancient ruins of Ur along the banks of the Euphrates river).  Ur is the place from which God called Abraham and Sara to set out.  He asked this friend to send a traditional shepherd’s robe to him, used and unwashed.  Qais then cut the robe and incorporated the cloth into his works. “We all came from Abraham.” I remember before the 2003 US led invasion of Iraq, standing in awe at Ur and looking out over the horizon. This site was later turned into a U.S. military base, as were Babylon and Nineveh.

Listening to Qais, I was reminded of another story on my first visit in 2007 to an ancient monastery in Syria, St. Moses the Abyssinian.  It is about 80 Kms. north of Damascus. The monastery is engaged in deepening inter-cultural and inter-religious collaboration.  I wrote in a subsequent letter to friends:

“On the morning after our arrival, my young Moslem friend and I were sitting outside at one of the low tables with a Syrian man breakfasting on bread, goat-cheese, eggs and tea.  At one point in the conversation I asked the young Syrian how he was personally affected by the massive number of Iraqis who have come to his country seeking refuge.  While larger than Jordan and with, I believe a population of about 17 million, Syria is poorer in comparison.

‘Do you see this cup?’ he asked, taking one into his hand and then slowly setting it down again on the table.  ‘Once we were three people sharing from this cup. Then two more people joined us.  Now we are five people drinking from the cup.’ His voice was sad, with no trace of resentment or rancor. ‘What shall we do?’ he asked.  ‘How can we turn people away?’”

This is a question that gnaws at me.  How can we turn people away?  As individuals, as families, as a community, as a country?  As a people of faith.  Abraham didn’t know that the three visitors were angels. Little did he know what door he was opening in welcoming these strangers.

Image- one of Qais’ five works in the Abraham exibit.