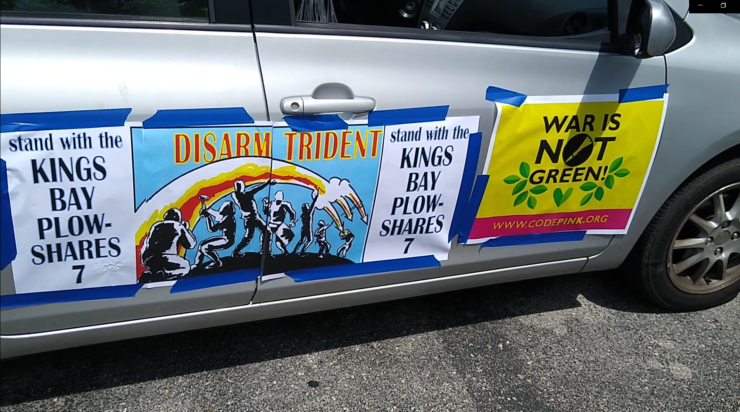 Starting at noon on Memorial Day 2020 (Monday May 25), Voices hosted a Chicago Car-a-Van for Peace and Disarmament traveling from Chicago’s Uptown neighborhood near the Voices office down to Henry Moore’s ominous “Nuclear Energy” statue – half-skull, half-mushroom-cloud – erected at the University of Chicago campus on the site of the world’s first human-made sustained nuclear chain reaction.

Afterwards we stopped by the nearby home of our friend, lifelong peace activist Brad Lyttle, to offer greetings and tribute from a respectful distance!

With important “social distancing” requirements making other forms of protest difficult, we took to the streets by car, in solidarity with caravans being organized nationwide by our friends at CODEPINK. We gave a special focus to the nuclear disarmament efforts of other courageous friends of ours – seven activists now facing serious jail time for protesting the United States’ nuclear-armed Trident submarine fleet – the Kings Bay Plowshares 7 (www.kingsbayplowshares7.org).

Memorial Day 2020 coincided with the UN Secretary General’s call for a Global Ceasefire (“The fury of the virus illustrates the folly of war”) and followed the May 24th International Women’s Day for Peace and Disarmament, a day to remember the cost to the planet of weapons and war.  Memorial Day is an occasion for admirable commemoration of lost loved ones, but we hoped to remind our neighbors to resist media efforts to exploit the holiday in promoting future wars.

Many thanks to CODEPINK, to our guest speakers Marcia Bernsten and Rosalie Riegle, and to Chicago antiwar stalwart Andy Thayer who came out to film us. Our earnest thanks to everyone who came out!