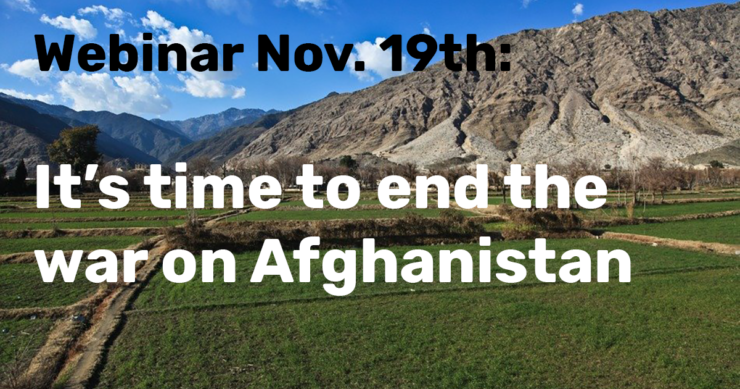 The U.S. war on Afghanistan is in its 20th year. The morning after this webinar, the House Armed Services Committee will hold a hearing on keeping it going. If you’re from the United States you can click here to email and phone your Representative to ask them to end the war and attend this webinar. You can also share this page with friends who might want to attend. And you can think of questions you plan to ask.

Ann Wright will be our moderator. Panelists will be Kathy Kelly, Matthew Hoh, Rory Fanning, and Danny Sjursen.

Click “Register” to sign up. You will receive a confirmation email with the Zoom information for the event. Be sure to check the box to “Yes, opt in to email updates” in order to receive important information for the webinar, including the Zoom link and the recording afterwards.

Ann Wright is a retired Army Colonel who became a US diplomat for 16 years in US Embassies in Grenada, Nicaragua, Somalia, Uzbekistan, Kyrgyzstan, Sierra Leone, Micronesia and Mongolia. She was on the team that reopened the U.S. Embassy in Kabul in December 2001 and remained five months. On March 13, 2003, Wright sent a letter of resignation to then Secretary of State Colin Powell. Since that day, she has worked for peace, writing and speaking all over the world and has returned three times to Afghanistan. Wright is co-author of Dissent: Voices of Conscience.

Kathy Kelly has been a founder of Voices in the Wilderness, coordinator of Voices for Creative Nonviolence, and member of World BEYOND War’s Advisory Board. During each of 20  trips to Afghanistan, Kathy, as an  invited guest of the Afghan Peace Volunteers, has lived alongside ordinary Afghan people in a working class neighborhood in Kabul.

Matthew Hoh has nearly 12 years’ experience with the United States’ wars overseas with the Marine Corps, Department of Defense, and State Department. He has been a Senior Fellow with the Center For International Policy since 2010. In 2009, Hoh resigned in protest from his post in Afghanistan with the State Department over the U.S. escalation of the war. When not deployed, he worked on Afghanistan and Iraq war policy and operations issues at the Pentagon and State Department from 2002-8. Hoh is a member of the Board of Directors for the Institute for Public Accuracy, an Advisory Board Member for Expose Facts, North Carolina Committee to Investigate Torture, Veterans For Peace, and World BEYOND War.

Rory Fanning went through two deployments to Afghanistan with the 2nd Army Ranger Battalion, and became one of the first U.S. Army Rangers to resist the Iraq war and the Global War on Terror. In 2008–2009 he walked across the United States for the Pat Tillman foundation. Rory is the author of Worth Fighting For: An Army Ranger’s Journey Out of the Military and Across America. In 2015 he was awarded a grant from the Chicago Teachers Union to speak to CPS students about the United States’ endless wars and to fill in some of the blanks military recruiters often ignore.

Danny Sjursen is a retired U.S. Army officer, contributing editor at Antiwar.com, senior fellow at the Center for International Policy, and director of the Eisenhower Media Network. He did combat tours in Iraq and Afghanistan and later taught history at West Point. He is the author of a memoir and critical analysis of the Iraq War, Ghostriders of Baghdad: Soldiers, Civilians, and the Myth of the Surge and Patriotic Dissent: America in the Age of Endless War. Along with fellow vet Chris “Henri” Henriksen, he cohosts the podcast Fortress on a Hill.

This event is supported by World BEYOND War, RootsAction.org, NYC Veterans For Peace, and Middle East Crisis Response.