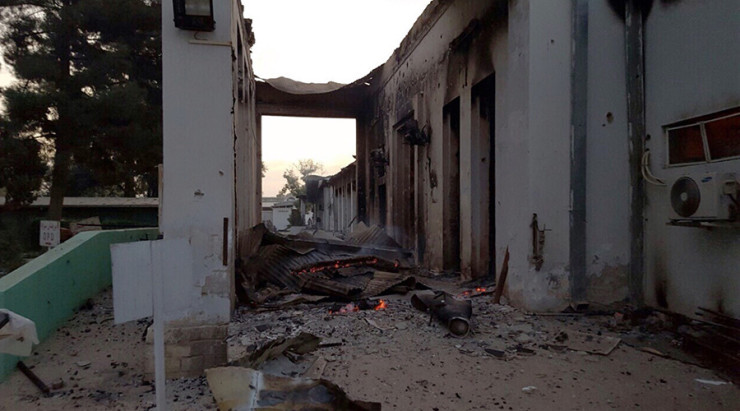 “Why did they attack us? We were trying to serve people.” –Khalid Ahmad, age 20, a survivor of the U.S. Attack on Médecins Sans Frontières (MSF) Kunduz Hospital.

Following the October 3rd U.S. attack on MSF’s hospital in Kunduz which killed 31 people, rescuers rushed 91 survivors to the Emergency hospital in Kabul. Two months later, Voices and APV activists visited the EMERGENCY hospital to donate blood, interview Luca Radaelli, the hospital coordinator, and visit Khalid Ahmad, age 20, a Kunduz hospital employee who nearly lost his life during the attack. Relatives found him bleeding to death in a ditch near the entrance to the Kunduz hospital. Two hospitals close to Kunduz couldn’t handle Khalid’s injuries, and so the relatives rushed him to Kabul where he is now recovering from a severe injury after shrapnel hit his spine.

Sitting in a wheelchair in the Emergency Hospital garden, looking frail and thin, Khalid Ahmad said he is relieved to be alive. At 2:05 in the morning on October 3rd, when the attack began, he was sleeping in the pharmacy. When he and the pharmacy manager hurried to see what was happening, they discovered that the ICU was in flames and patients were burning. They quickly headed to the room where four security guards were staying. . Knowing that the U.S. military could pick up mobile phone signals and attack and kill according to these signals, they all turned off their mobile phones and hid the batteries. Next, they decided to make a run for the hospital entrance, hoping to escape the attack. Khalid ran amidst the bombing and strafing by a U.S. AC-130 gunship. Just as he reached the hospital gate, a shrapnel hit his back. Khalid fell. Unable to move his legs, and bleeding profusely, he crawled into a ditch for shelter. Half conscious, he laid in pain, convinced he would die. Khalid recalls that after the bombing, he saw flares that seemed to fuel the fire, like incendiary petrol, multiplying the effect of the flames. “I’m not sure what they were,” he said, “but they looked like laser flashes.”

While he lay in agony, in the ditch, he wanted to call his father and seek his forgiveness for any wrongs he ever did. He could only use one hand, but he managed to get the phone, put the battery in, and make the emergency call.

His father immediately sent relatives to find him. Khalid remembers hearing footsteps and then the voices of people who rescued him.

The U.S. military played no role whatsoever in helping to rescue, evacuate or transport victims of the attack.

Luca Radaelli, medical coordinator for all of EMERGENCY’s facilities in Afghanistan, told us that their Kabul hospital was already full when they quickly opened new wards to begin receiving traumatized survivors of the October 3rd U.S. attack on the Kunduz hospital.

Luca has worked in Afghanistan for close to seven years. Each year, he and his colleagues have said that the situation is worse than ever before. “And now I’m telling you,” Luca said, “never have we seen so much suffering. Health care systems in the provinces are collapsing. We expend a lot of energy, but it seems more and more like a drop in the ocean.” His colleague, Michaela, medical coordinator for the Kabul hospital, told us how difficult it has been, emotionally, for all of the staff to know, amid the stress of working in a war zone, that the U.S. military could destroy their facilities, kill and wound their colleagues, incinerate their patients.

MSF staff continue to demand an independent investigation of the attack on the Kunduz hospital, but the U.S. military insists that its investigation will be sufficient.

When asked what he thought about UK plans to bomb Syria, Khalid Ahmad said that these governments want to be the empires of the world and will destroy the people to achieve their goals.

“If we care about people,” said Luca, responding to the same question, “we cannot choose war.”

Kathy Kelly (Kathy@vcnv.org) co-coordinates Voices for Creative Nonviolence (www.vcnv.org) While in Kabul, she is a guest of the Afghan Peace Volunteers (ourjourneytosmile.com)