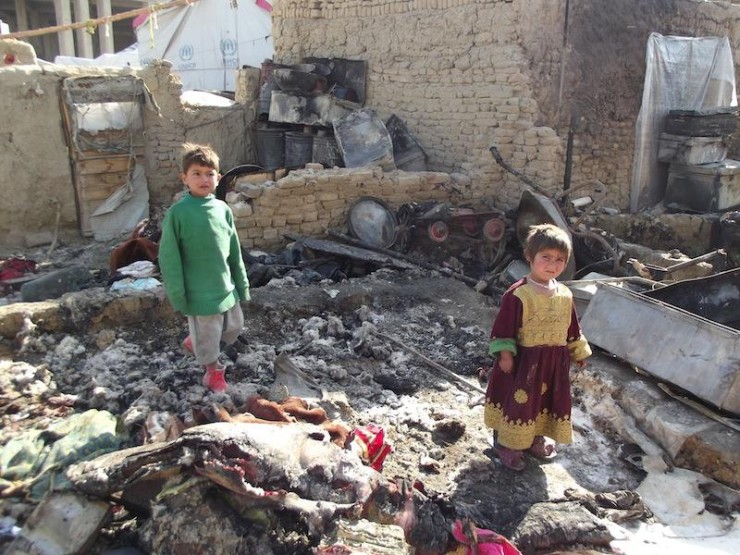 In Kabul, where the Afghan Peace Volunteers have hosted me in their community, the U.S. military maintains a huge blimp equipped with cameras and computers to supply 24 hour surveillance of the city. Remotely piloted drones, operated by Air Force and Air National Guard personnel in U.S. bases, also fly over Afghanistan, feeding U.S. military analysts miles of camera footage, every day. Billions of dollars have been invested in a variety of blimps which various vendors, such as Raytheon, Lockheed Martin, Northrup Grumman, and Aeros have shipped to Afghanistan. All of this surveillance purportedly helps establish “patterns of life” in Afghanistan and bring security to people living here. But this sort of “intelligence” discloses very little about experiences of poverty, chaos, hunger, child labor, homelessness, and unemployment which afflict families across Afghanistan.

This morning, Zarghuna listed for me the survey questions that she and her young colleagues ask when they visit families in Kabul. The family visits help them choose participants in the Borderfree Street Kids School and the Duvet Project. The survey teams also help with plans for a “Food Bank” that the Afghan Peace Volunteers hope to open sometime in the coming year.

The questions Zarghuna and the survey team use may seem simple.

How many times a week does your family have a serving of beans? Do you rent your home? Can anyone in your family read and write? Child laborers are asked to tell about what type of work they do in the streets, how many hours they work each day and how much money they earn.

But the answers open up excruciatingly painful situations as many family members explain that they never have adequate food, that the only person earning an income is one of the children, that once they pay rent for the mud home in which they live, they have no remaining funds for food, blankets, fuel or clean water.

I’ve watched the young volunteers work hard to develop useful survey questions and discuss ways to be sensitive as they visit families and try to build trust. Sometimes very difficult arguments erupt over which families are most needy.

As the Pentagon decides about investments in aerial, remotely controlled surveillance capacities, disagreements over which proposals to support have arisen within the various military forces. Defense companies pay handsome salaries to former military leaders who will advocate for one or another program. Afghanistan has become a “proving ground” where different “protective” systems have been tested, including successive generations of Predator and Reaper drones and the aerostat “blimps.”

In Afghanistan, an October 11, 2015 accident involving a U.S. military blimp cost the lives of five people. The Intercept reported that “a British military helicopter was coming in for a landing at NATO headquarters, where the blimp is moored. According to an eyewitness who spoke to the BBC, the helicopter hit the tether, which then wrapped itself around the rotors. The helicopter crashed, killing five people –two U.S. service members, two British service members, and a French contract civilian—and injuring five more.”

Among opponents of continued funding for blimp surveillance, blimp accidents are but one of many criticisms raised. Some Army leaders argue that even a fully functioning blimp borne air defense system would be irrelevant in terms of the kinds of attacks that threaten U.S. troops in Iraq and Afghanistan. The Los Angeles Times notes that “the weapons that were killing and maiming U.S. troops in Iraq and Afghanistan were crude rockets, artillery and improvised explosive devices.”

Other real and life threatening threats afflict many Afghans, especially the poorest people. These threats are invisible to surveillance carried on by blimps or drones.

A UN Human Development Report recently revealed that Afghanistan has slipped to 171st of 173 countries in terms of development.

The UN report says that an Afghan person can, on average, expect to live 60 years. According to the CIA World Fact Book, the average life span here is 50 years.

The U.S. military continues to invest billions of dollars in the “surveys” accomplished by blimps and drones. Certainly poverty and desperation cause people to fight against foreigners who have invaded and occupied their country.

If U.S. resources spent on unproductive military surveillance of Afghans were dedicated to assessments of both U.S. and Afghan people burdened by poverty, unemployment, hunger, disease and climate change, today’s U.S. generations would be less willing to feed their tax money to the insatiable appetite of the “defense” corporations and their illusions of omniscient security.

One thought on “Surveillance and Surveys”