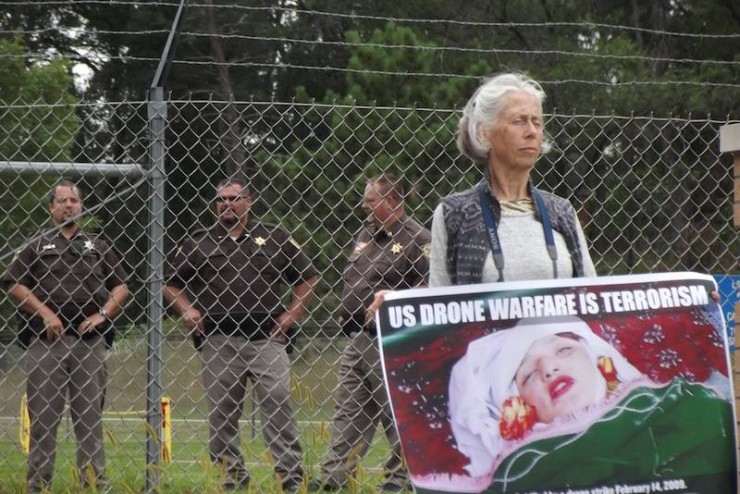 Father Jim Murphy of Highland, WI was found guilty of trespass during a bench trial on January 4, 2016.  With Judge Paul Curran presiding over the Juneau County proceedings we saw another miscarriage of justice in our continuing struggle to end drone warfare.  Jim will be spending five days in the Juneau County jail after stating he would not pay a $232 fine.

Jim was arrested on August 25, 2015 along with eight other activists, for stepping onto the base at Volk Field, an Air National Guard Base in Wisconsin where they train pilots to operate the Shadow Drones.  This action was at the end of an eight-day 90 mile walk from Madison, WI to Volk Field organized by Voices for Creative Nonviolence.

The prosecutor, DA Solovey, called three witnesses – the chief of security at Volk Field, the Juneau County Sheriff, and a deputy sheriff – to establish Jim’s identity, that he did walk onto the base, and that he was not authorized to do so.  Jim declined to cross-examine the county’s witnesses.

Jim took the stand in his defense and stated his name as Jim Murphy.  Curran wanted it noted for the record that Jim was a Catholic priest and was officially Father James Murphy.  Jim began to read a prepared statement condemning drone warfare.  He was interrupted by Curran who said that this is only about the trespass charge, nonetheless he allowed Jim to continue with his statement.  However, Solovey quickly objected and the judge said Jim could not finish his statement.  The judge also commented that Obama does not care what his court has to say about drone warfare.

Jim was persistent and asked for the court’s indulgence to complete his statement, and finally Curran decided to allow him to finish.

Jim eloquently reminded us that, “We cannot remain silent without becoming complicit.”  I hope the judge heard that and thought about what his silence means.   Jim finished by saying, “You view this as a trespass charge.  I view it as a long tradition of opposition to war.”

Judge Curran ruled that Jim was guilty of trespass and said he would have to pay a $232 fine.  Jim said he was not able to pay the fine and would do the jail time instead.  Curran seemed very uncomfortable with this prospect (because he was a priest?) and finally Curran responded that he knew Jim really couldn’t pay the fine and so he would sentence him to five days in jail and spare him the lecture about Juneau County’s financial difficulties.

This was in reference to the lecture given by Judge Curran when two activists from earlier trials took the jail time rather than pay the fine.  The judge told them that Juneau County is one of the poorest counties in the state and admonished the activists for using county money to put them in jail in lieu of paying the fine.  I guess Judge Curran must have some kind of insider knowledge – or more likely some deep-seated prejudice – so that he can determine that it is ok for some of us to choose jail time, but not for all of us.

The judge could have saved the county a lot of money by granting our motion for consolidation, but he refused to do so.  There will be seven more trials, with Bonnie Block coming next on January 8.

My statement to the court is below.  After I read the first paragraph the District Attorney objected but Judge Curran did not honor his objection and let me read the statement without interruption which is progress because in the past we have often been interrupted when trying to make our case.

STATEMENT TO THE JUNEAU COUNTY COURT on January 8, 2016

I sit in this courtroom once again charged with trespass and the claim that trespass is purely a matter of “whether or not one entered or remained on the land of another” and that any justification for doing so is merely political and thus not relevant in a court of law.  Yet the bedrock foundation of the rule of law is due process. Thus I need a chance to speak of why my action on August 25, 2015 should not be viewed as trespass. There was no intent to harm anyone or damage anything which is what trespass laws exist to prevent. Rather it was an act of nonviolent civil resistance calling on Volk Field personnel to abide by the rule of law. Why do I say that?

Drone warfare is Illegal.  From all the reading and legal research that I’ve done I’m convinced the training of and use by operators of the RQ-7 Shadow 200 UAV’s at Volk Field is part of an illegal program.  I refer the Court to the 14-page Motion to Dismiss I filed in on April 18, 2014 prior to my first trial on an almost identical set of facts.  Obviously, I won’t repeat all of that but four things do need to be said.

First, targeted assassinations are murder because bombs from the sky provide absolutely no due process and murder is illegal in all 50 states.

Second, The US has ratified the UN Charter which requires member states to settle disputes by peaceful means and to refrain from the threat or use of force against any other state.  The US claim that the right of self-defense allows it to engage in pre-emptive attacks is not valid.

Third, the UN General Assembly and its Human Rights Council both have declared drone warfare to be a war crime. This should come under the jurisdiction of the International Criminal Court but the US has not ratified the ICC precisely because it fears US officials being might be found guilty of just such crimes.

Fourth, drone warfare violates the provisions of Universal Declaration of Human Rights which sets the basic standards by which human beings should be treated.  Multiple international human rights organizations charge the US with violations of international humanitarian law.

Drone warfare is also immoral. I need not go into the moral arguments against drone warfare because this past Monday one of my co-defendants, Fr. Jim Murphy, eloquently set them out in this very courtroom prior to being sentenced to five days in jail.  I agree and affirm every word of his statement most especially that “we cannot remain silent without becoming complicit.” There is no justification for even one person much less thousands of people being killed, wounded or terrorized by US drones.  Data for each country in which drone strikes occur can be found at the Bureau of Investigative Journalism.

Drone warfare is ineffective.  The recent release of “The Drone Papers” is just the most recent report showing remote-controlled wars are counter-productive.  A summary of this report published on October 23, 2015 at www.commondreams.com  states:  “Even a drone operator who defended this type of warfare… admitted that things have gotten worse on the ground: “The military has quadrupled drone strikes over the past seven years; and now instead of hiding in Waziristan, al-Qaida is flourishing all over the world.”

Not only that, but what goes around comes around.  The New York Times and other media outlets are reporting that US drone operators have the same or even higher rates of PTSD than military personnel who have been in combat.  And, God bless them, many are leaving military service because they can no longer stand the stress of participating in remote control killing.

Rights and Duty. Every citizen has not only the constitutional right, but I think a duty, to engage in nonviolent resistance when our government is in violation of the law. Crossing the line is one way of exercising our constitutional rights to free speech and petitioning a branch of the government for a redress of grievances over what is being done in our name and with our taxes.  Eleanor Roosevelt once said: “Where, after all, do universal rights begin?  In small places, close to home. (…) Unless these rights have meaning there, they have little meaning anywhere.”

That’s why I keep coming to Volk Field and ending up in this Courtroom.  Wisconsin is our home and dismissal of this trespass charge could set a new precedent right here in this small place. We could honor universal human rights here.

The myth that the use of force such as drone warfare will make us safe and the influence of the war profiteers producing drones and other weapons of war are both very strong.  But we could all, in our own way, be one of those tiny grains of sand that slows down the gears of the machinery of death.   We could help stop the drones originating from Volk Field rather than acquiescing in ratchetting up the level of violence and injustice because we’re “just following orders” or “we can’t make policy.”

Thus I continue to engage in nonviolent civil resistance to call on my government (and its military) to abide by the rule of law and that I believe fails to meet the elements or intent of the law of trespass.  Instead I ask—as do the children of Afghanistan—that we “Fly Kites, Not Drones.”

I was wearing one of the “Fly Kites Not Drones” T-shirts the WI Coalition has had printed so everyone in the courtroom saw our heartfelt desire–especially the Sheriff and one of his Deputies who had to identify me — thus insuring they also saw the words on the shirt.

BUT as has happened previously each time one of us has gone to trial, the Judge did find me guilty of trespass under a County ordinance.  I said that as a matter of conscience I couldn’t pay the fine and would do the jail time or better yet community service.  (At my trial in 2015, the Judge said the County couldn’t afford to hire a supervisor for court-ordered community service and thus sentenced me to five days in the Juneau County Jail.)

This time I made came more prepared.  A local pastor, Rev. Terry McGinley, appeared on my behalf to say would supervise my community service at one of three non-profits in Mauston (the county seat) that he had already contacted. He also said he would report back to the Court upon the completion of the number of hours the Judge ordered and do this without charge to Juneau County. The Judge replied that he wasn’t able to make a decision “after just hearing about it three minutes ago.”

Apparently Judge Curran didn’t remember that we have been asking for the community service outcome for two years.  Or perhaps he was miffed that I was forcing the issue.  Anyhow, he sentenced me to pay the $232 fine and if it wasn’t paid in time Juneau County would attach my income tax refund and thus get the money — regardless of my conscientious objection to paying a fine for an action taken in opposition to what I believe is a war crime!

I plan to file a Motion for Reconsideration after Rev. McGinley has met with Judge Curran to see if there is still a way to work out doing community service in lieu of paying a fine.  So many human service programs have been cut because our elected officials doubled military spending since 9/11. Thus it seems only right to support a Food Pantry, an Aging and Disability Resource Center or a Habitat Restore instead. (These were the three agencies that told Rev. McGinley they would welcome court-ordered community service.)

Stay tuned.  Six more trials are scheduled later in January and in February.