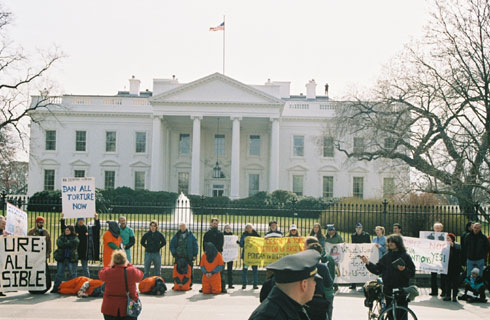 Friday January 8 marked another day of flying to Washington, DC for a week of activism – again. I was feeling sad leaving my family for a week and not looking forward to what I knew I was going to have to do in speaking out against the crimes of our government.

While in DC I stayed with my dear friend Malachy and his family and that is always a comfort to be in their home. Each day was filled with activist work. On Saturday we vigiled against drones at the CIA and I had the opportunity to share what we are doing at Volk Field in Wisconsin where we have been holding monthly vigils against drones for over four years, along with occasional nonviolent direct actions risking arrest. On Sunday we met with a doctor who is the head of Physicians for Social Responsibility in the DC area. He would like to engage more doctors from that organization in civil resistance. He thinks it is a critical time for more people to take to the streets and work for peace and justice.

On Monday we went to the White House where our friends from Witness Against Torture were holding their annual vigil marking 14 years since the first men were imprisoned and tortured in Guantanamo. It was a moving vigil as about 20 activists in orange jumpsuits and black hoods walked into the picture postcard area in front of the White House. As the police began pushing the rest of us back to the sidewalk in Lafayette Park I resisted and held my ground as long as possible. For over an hour, our voices were raised together as we sang:

We hear a beautiful sound

It is the breaking of chains

We see a path of hope

We have found the way

Eventually those who had been standing in the picture postcard area joined us and we gathered in a circle in the street again and ended the vigil. A number of men have recently been released from Guantanamo after 14 years of false imprisonment and torture, but Obama could have released them when he became president seven years ago, cutting in half their time there.

As we stayed busy for several days, Tuesday January 12 was weighing heavily on my mind and I was anxiously waiting for that day when the National Campaign for Nonviolent Resistance (NCNR) was planning a nonviolent direct action. On January 12, the day Obama was going to give us his State of the Union address we were going to deliver a petition to the U.S. Capitol on the “Real State of the Union” outlining what was really going on, along with ideas for solutions. We also had a list of war crimes that had been committed by our government that we wanted to share.

I woke up early on Tuesday morning. Malachy and I had a big breakfast knowing we may not eat again for a long time. We took the Metro to town and as we walked by the Capitol we scoped it out, paying attention to where we might want to go to deliver the petition, and noticing the police – how many there were and where they were. We met up with Max and Janice and the four of us looked at the situation to get a better sense of how the action could unfold.

We gathered together at 11:00 am at a church near the Capitol. It always feels so good to great my old friends and comrades in the struggle. I have been risking arrest with many of them for over ten years now.

I was helping David Barrows stretch out his banner “The Real State of the Union” on wooden poles when Malachy came over and told us that he just heard that Tim Chadwick had died. Tim had been a regular at NCNR actions for many years, but I had not seen him for a couple of years. I was shocked and deeply saddened to hear this news. Tim was an amazing activist and never gave up on trying to change the world, and we all knew that we had to continue with our action for the day in his honor.

The group who was going to risk arrest met together in a corner of the church hall to do final planning for the action. We decided we would attempt to deliver the petition to Joe Biden, president of the Senate, as well as vice-president of Obama’s administration. After the planning meeting, we all gathered together for an open mic where we were inspired hearing about what others were doing and sharing stories of past actions.

At 1:30 pm we left the church and gathered on the street corner near the Supreme Court and across the street from the Capitol. We were planning to set up on the sidewalk directly in front of the Supreme Court, but the police there would not allow us to set up the model drones and so we moved to the corner with our drones – another infringement on our First Amendment rights.

We had a rally with a number of speakers talking about the issues of war, poverty, racism, and climate crisis that brought us together that day. Though we sent out a press release, the only media attention we got was from the foreign press, with just one local independent media person. It is a real failing on the part of our mainstream media that they do not provide coverage showing dissent, with people talking about these important issues.

At about 2:30, after each person risking arrest was able to share why they were engaging in nonviolent civil resistance, we walked toward the Capitol with petition in hand. There was a long roadway leading from the sidewalk to the Capitol and we thought we might be stopped, but we were able to get to the steps of the Capitol before an officer stopped us and told us we could not go any further.

We told him we wanted to deliver a petition to Biden, as well as a list of war crimes, and he said we couldn’t, but that he would escort us to the grassy area where we could protest. We told him that we were not there to protest, but rather we were citizens who were attempting to deliver a petition to our government for a redress of grievances, a First Amendment right. By this time, some members of our group were on the steps holding a banner saying, “Stop the War Machine: Export Peace”. The officer said they needed to come down off the steps, and at that point the rest of us walked up the steps and stopped short of a chain blocking us from going further with a sign that said there was no access to the public past that point.

Art Laffin, who was there with others in solidarity, led the group in singing “We shall not be moved” and as we sang an officer gave us three warnings that we needed to get off the steps. As we held our ground they started handcuffing those on the steps and told the others that they had to leave if they didn’t want to be arrested.

It was probably less than 15 minutes between the time we arrived at the steps of the Capitol and the arrests began. I expect they wanted to clean up quickly before people started arriving for the president’s version of the state of the union.

We were taken in vans to the Capitol police station where we were processed and released with a court date of February 3. When we compared citations after the action some read we were charged with blocking, other citations noted the charge was incommoding and obstructing.

I will be surprised if the government goes through with prosecuting us. It seems the government is dismissing a lot of cases against activists over the last few years. In this case, we were exercising our First Amendment rights, simply and peacefully attempting to deliver a petition to our government. We did block or obstruct anyone. We were standing against a chain, we did not cross, that had a sign reading the public did not have access past that point. What did we do wrong? Why were we arrested?

The charges may be dismissed, but it would be better if we went to trial and could bring these issues into the courtroom. If we continue to be arrested and then the charges are dropped before trial, it appears that the government is using that as a way to block our access and not allowing our grievances to be heard.

As we have noted in many actions over the last several years, the government is becoming less and less accessible to the citizens. If you are part of a wealthy corporation or have a lot of money, you will have the ear of those in power in DC. But the rest of us do not have a way to access our government about our concerns. We have written letters that have not been answered. We follow up with visits to the White House, Congress, the Pentagon, the Department of Justice etc. and we are refused a meeting with anyone in a policy-making position. My friend Linda said that as the crimes of the government become greater and greater, accessibility to the government becomes less and less.

I do not take action because I want to be arrested, though I know I put myself at risk for being arrested for the actions I take. I am engaging in nonviolent civil resistance and I am acting in resistance to the crimes of the government. I am not the one who is breaking the law, but we have many in our government, including Obama, who should be prosecuted for war crimes and crimes against humanity.

These actions are not something I relish doing, but I feel a deep spiritual calling to do this work for my grandchildren and all the children of the world. I am not suffering by the minor inconvenience of being arrested, but there is much grave suffering by children, mothers, and fathers, sisters and brothers both here at home and around the world because of the illegal policies of our government. And so, when I do an action like this I know I am exactly where I need to be and speaking out exactly as I need to be speaking. There is no place else in the world I needed to be at that moment, but on the steps of the Capitol trying to deliver a petition of our grievances.

There are so many grave ills facing the world – war, poverty, racism, climate crisis, and systemic violence to name a few. Please consider taking to the streets. We need more people in the streets engaging in nonviolent civil resistance. That is the only way we will bring about real and lasting change. We will not survive unless we do. It is up to we, the people to demand change.

Video of the January 12 action