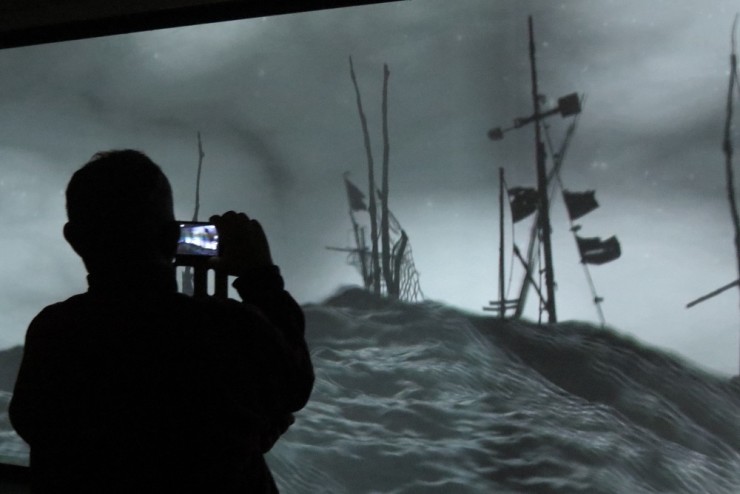 As I put together this photo journal of an Iraqi father and his dear son seeking asylum in Finland, I found renewed hope in relationships.

Relationships change our lives, and so, they change our world every day.

But, relationships are not an ‘oppositional’ power. They are invitational, and completely unarmed. Therefore, they will overcome, someday.

Kathy Kelly, Cathy Breen, David Smith-Ferri, Bob Alberts ( U.S. peace activists with Voices for Creative Nonviolence ) and I visited Mohammad and Omar in Helsinki from the 7th to the 14th of Jan 2016.

Being a friend of the Afghan Peace Volunteers, I was also grateful for a chance to briefly meet three Afghans. Gul Agha and his daughter, Zainab, are Finnish Afghans who were refugees 15 years ago. Jafar arrived in Finland just three months ago.

We were hosted by Salla Nazarenko, the Executive Director of Physicians for Social Responsibility in Finland.

First, a brief about how the individuals in this journal connected with one another.

Kathy, Cathy, and David have been to Iraq at various times since 1996 as part of Voices for Creative Nonviolence’s work to resist U.S. economic sanctions and wars in Iraq, and at different times over those visits, they got to know Iraqi mechanical engineer Mohammad, now 46 years old, and his son, Omar, who turns 18 on the 19th of Jan. Bob Alberts has been supporting the work of Voices for Creative Nonviolence over the past few years. Kathy and David have visited me and the Afghan Peace Volunteers in Kabul many times since 2010.

Mohammad and Omar fled Iraq’s U.S.-driven sectarian war as refugees to Europe and arrived in Finland on the 20th of September 2015, after a harrowing two-month trip over land and sea.

Salla Nazarenko, who lives in Finland with two daughters, Ilse and Amanda, had written to Cathy after reading Cathy’s article on Mohammad and Omar.

Each person has family and friends who colour these friendships, pencils, water colours, oils, crayons…

Our recent war and peace story

After many empires, of different names ( ethnicities ) and continents over many centuries, and while the British and Russian empires seemed head-strong, World War I broke out.

It was not what it was meant to be, the ‘war to end all wars’. Though human resolve to ‘remove the scourge of war from future generations’ did grow, as stated in the 1945 post-WWII UN Charter, one of many Cold Wars ensued, and militarism became normal.

Today, new ‘types’ of military wars, along with economic and environmental wars, are fueled by the power and money interests of an increasingly small percentage of elites. Where ‘war’ isn’t a convenient word, ‘R2P’, ‘kinetic action’ and other names pacify us, more like, ‘maintain’ us.

In 2015, mainly to escape wars, a record 59.5 million human beings were refugees, 86% of them seeking refuge and/or asylum in ‘developing’ countries, and only 14% in developed countries, including Europe.

The top five origins of refugees who have applied for asylum in Europe are Syria, Afghanistan, Kosovo, Iraq and Albania.

All these figures say practically nothing about the number of relationships involved in and affected by what must be one of the largest, nonviolent people movements in history, people choosing not to fight, but to take the risk of running away from what the United Nations High Commissioner for Refugees reported as our ‘world at war’.

Crowds, especially at travel stations, literally cross one another’s paths, but we don’t converse. We seem only to be able to handle input on the digital screen, not face-to-face. Even ‘at war’, we no longer wish to fight face-to-face; as far as possible, we do the killing remotely.

Some of us are even ‘at war’ with those ‘fleeing war’. We are wrapped up, working hard to make a living, so we are no longer able to question and address the root causes of human conflict. We presume that the war-refugees are running away from wars caused by the refugees themselves! Irrationally, we ‘feel’ that refugees are as dangerous as the ‘ISIS, Al Qaeda or Taliban extremists’ they are fleeing from.

Our vision is limited to our screens and ourselves.

But there is hope, re-ignited when we take a minute to call on the power of relationships, in asking one another, “Do you miss your family or friends?”

I not only notice the mobile phones

the tender conversations they carry

in homes of love:

“Has aunt recovered?”, and

“I’ll call as soon as the plane touches down.”

“I miss you already.”

“Please make sure your phone is charged…,”

feelings I had exchanged before.

Even at airports and travel stations,

where many people scrape paths,

Cathy Breen and David Smith-Ferri in the Finnish cold!

It was minus 24 degrees celsius outside in the Helsinki streets,

and the Kabul cough inside me seemed eager to empty

past the scarf Ghulam had gotten me,

into the migratory paths of

all preoccupied, and lonely at times.

Mohammad de-stressing in the cold

Though, when I wrote to mom and dad,

I didn’t tell them about the cough.

or so I think.

But why do I fear

that loved ones can’t handle it?

Kathy Kelly and Cathy Breen catching up with Mohammad’s wife

“All of you, take care of my son!” exhorted Omar’s mother,

has a heart that’s bigger than the world.

Her voice came in strong waves,

as Cathy, David and Kathy assured her,

“Omar’s such a fine boy; she takes after you!”

in a centrally-heated apartment, so “he’s warm, don’t worry!”

Salla, taking her daughters out to a friend’s place

Salla, and her Finnish friends

gave unconditional hospitality to us,

then strangers and refugees,

even a Finnish sauna in the men’s apartment!

That’s when I saw Mohammad and Omar’s strength,

their sustenance and lifeline:

it comes through their phones,

to be nourished by the siblings, and Mother,

because, we all know this,

and keeps us alive.

Especially when we go ‘mad’,

went berserk in the smuggler’s boat,

knifing the inner air tubes of the dinghy,

as if beckoning death to come sooner,

“Our power structures cut through the people’s tables, but are inherently unstable.”

didn’t speak for 10 days after the

because we can’t cope with who we are,

what human society has become,

and the ‘deserts’ of antagonisms.

We have no more words.

He noted my answer in Arabic,

as he wanted to pronounce it right

to Rasul, an Afghan in the same refugee centre.

Later, when I met Rasul,

I was ushered into his circle,

as if I was a family member.

wearing my gift of a Borderfree scarf.

that we all want to be happy and safe,

but that we’re in the same sinking boat,

while a few angry and reckless human beings,

with advertisements and slogans,

and they wage war.

They steal from, profit from,

kill and bomb everyone else but themselves.

So, what’s the missing ‘glue’?

We don’t call one another,

to ask about things we don’t understand,

Bob, David and I said our goodbyes to Mohammad and Omar

as I should have 13 year old Afghan street kid Ibrahim,

who drowned crossing from Turkey to Greece,

but still gifting those he related with

I had struggled to close Ibrahim’s story,

but now I re-discovered that relationships needn’t close,

as they are part of a power and a life

that extends way beyond the physical.