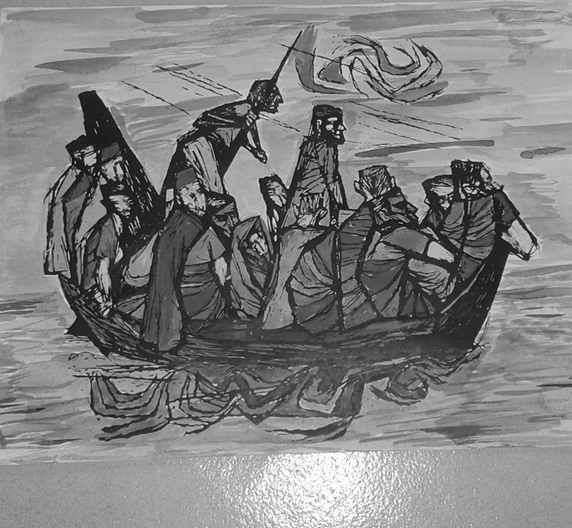 In July of 2013, Pope Francis visited the tiny island of Lampeduso off the coast of Italy. He offered mass on an altar made from a small wooden fishing boat which had brought refugees to the island.

In a homily during the visit Francis said “Immigrants dying at sea, in boats which were vehicles of hope and became vehicles of death…. When I first heard of this tragedy a few weeks ago…I felt I had to come here today, to pray and to offer a sign of my closeness, but also to challenge our consciences lest this tragedy be repeated. Please let it not be repeated…Let us ask the Lord for the grace to weep over our indifference, to weep over the cruelty of our world, of our own hearts, and of all those who in anonymity make social and economic decisions which open the door to tragic situations like this. Has anyone wept? Today has anyone wept in our world.”
It is now January of 2016. A group of five of us just traveled to Finland from Afghanistan, California, Chicago and New York city to meet in the city of Helsinki for one week. We went to see an Iraqi refugee friend and his 17 year old son. One might call it an extravagant squandering of funds, and we also questioned the rationality of such a trip.
I had written about the arduous 42-day journey of this Iraqi friend and his son from Baghdad to Finland. They fled to Kurdistan and then toTurkey. They were on three different Greek Islands before reaching Athens. They went through Macedonia, Serbia, Hungary, Austria, Germany and Sweden. Finally they arrived to Finland in late September of 2015.
Our friend, I will call him Mohammed, left a wife and six other children in Baghdad. He fled to Finland with the hope that fewer refuges would travel there and the chances of a securing asylum and getting reunified with his family would be speedier.
Somehow we felt the need to go to them as they enter the deep winter months of the artic north. During the week we were able to visit Mohammed and his son at the compound where they are staying with about one hundred other refugees, and bring them to Helsinki to be with us for some days.
A young woman in Helsinki, a journalist herself and a single mother of two girls, opened her apartment and heart to us, housing Kathy Kelly and myself. She secured a second apartment from a friend where the male members of our little group, including Mohammed and his son Omar, could stay. This meant that we could spend the days together, and shop and cook for ourselves. Our dear host had contacted activist friends and colleagues and set up meetings for us which were of invaluable help.
Repeatedly we heard from people we met that things have changed in the last months. The political situation is tense with a right-wing conservative government influencing peoples’ attitudes. The government doesn’t want refugees. There is growing racism, misinformation and hate speech in the media. Street patrols have been organized in four Finnish cities “to protect the neighborhoods.” The economy is in bad shape with budget cuts. People are getting poorer and more prone to hate speech. Although the angry loud voices are a but a small minority, they are the ones getting media attention.
Approximately 40,000 refugees came last year to Finland, the majority Iraqis. Only 3% are Syrian. Before it was 3,000 to 4,000 annually. Finland has a population of 5 ½ million. Perhaps the most disheartening news we received was that pertaining to family reunification. Already a difficult process, there is a proposal that, if legislated, would require a refugee with residency to pay 500 euros for each child seeking reunification. This would be in addition to having 1,300 euros in the bank monthly. In Mohammed’s case this would mean an earnings of 4,300 euros monthly. A sanitation worker’s monthly salary is approximately 1,500 euros. There is also no Finnish embassy in Baghdad. This means that Mohammed’s wife would have to travel to Turkey with all of the children to have an interview there. So many obstacles.
From Helsinki I went on to Berlin. Approximately one million refugees have entered Germany in the last year. With a population of 80 million, that means one in 80 is a refugee. If the U.S. had the equivalent percentage given our population of 300,000,000, we would have taken 4 million last year from Syria, Iraq and Afghanistan. I would be surprised if we have received even 1,000 from those countries.

Today the question must be asked, Pope Francis says, “Who is responsible for the blood of these sisters and brothers of ours? Nobody! That is our answer: It isn’t me; I don’t have anything to do with it; it must be someone else, but certainly not me….The culture of comfort, which makes us think only of ourselves, makes us insensitive to the cries of other people….In this globalized world we have fallen into globalized indifference. We have become used to the suffering of others: it doesn’t affect me: it doesn’t concern me; it’s none of my business.”

“The globalization of indifference has taken from us the ability to weep!”