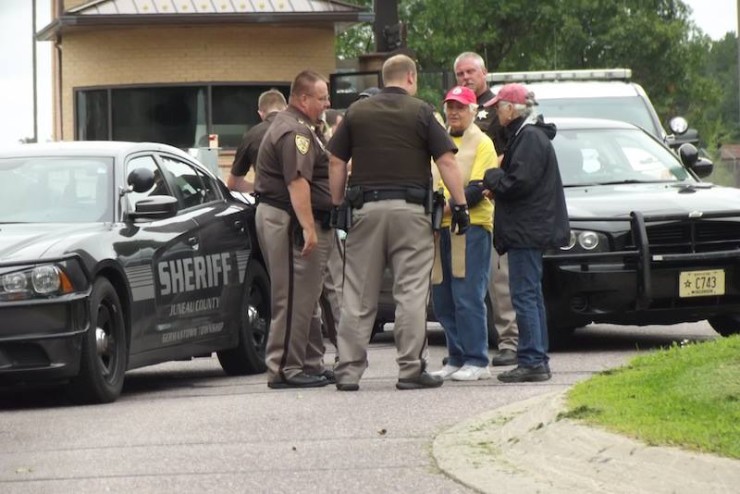 Joyce Ellwanger was found guilty of trespassing by Judge Paul Curran in Juneau County court on Friday January 22, 2016.  Though Curran never formerly pronounced a verdict saying Joyce was guilty, he said she trespassed and he imposed a sentence in another heavy-handed trial for the nine activists who were arrested at Volk Field in August 2015.

Refusing our request to consolidate the cases, Judge Curran has already found Jim Murphy and Bonnie Block to be guilty.  Jim spent five days in jail, and Bonnie asked for community service, but Curran refused and said that if she didn’t pay the fine it would be attached to her income tax.  Four trials are remaining and coming up in February.

The DA, Michael Solvey, continued his familiar defense in Joyce’s trial.  He called the county sheriff and a deputy sheriff to take the stand, establishing Joyce’s identity and that she did indeed cross onto the base.

Joyce cross-examined both witnesses.  Through questioning the witnesses confirmed that when someone arrives at Volk Field they drive their vehicle to the guard house, several hundred feet past the brick gates, show their identification, and state why they are there.  Joyce asked why we are discriminated against and were stopped at the gates and not asked about why we were there.  The reply was that they knew were there to protest and get arrested.  Joyce stated that was not her intention.  She was there to talk to the commander about the drones.

Judge Curran questioned the deputy about whether he (or another member of the general public) would be able to drive to the gatehouse and the deputy responded he would.

After the defense rested, Joyce took the stand.  The Judge showed her the pictures of the gate and guardhouse that were entered into evidence and asked Joyce where the gates were and where the guardhouse was.  It was noted that there was quite a distance between the two.  Joyce continued her testimony by reading a moving statement about why she was there.  She said that she stands with Jim and Bonnie in saying that silence is complicity.  She also talked about how all human life is precious.  (See full statement below.)

When she finished, DA Solovey asked that her complete statement be stricken from the record, and the judge quickly sustained the motion.  We were all shocked by this, and later Joyce stated,  “There were two areas in which I felt blindsided by Judge Curran and District Attorney Solovey:  The first was when Mr. Solovey asked that my testimony be stricken from the record as irrelevant to the trespassing charge and the judge immediately sustained his request.  There was not even time to raise an objection and I was stunned by this action which was inconsistent with allowing me and my codefendants in the past to enter our statements into the record.”

That was it.  Curran never actually pronounced a verdict stating Joyce was guilty.  He said that an issue was raised that caught his attention.  He questioned why we were not allowed to go to the guard house which was quite a ways from the gates –  if that was the standard procedure for others arriving at Volk Field.  But then Curran said he got the answer from the deputy who said we were told that we were not supposed to go beyond the gates, so that solved that problem according to the judge.  He told Joyce she did trespass.

Looking back, I think this was a ruse on the part of the judge.  He is presiding over eight almost identical cases and I can imagine he doesn’t want it to look like he is just automatically finding us all guilty, so in this case he can say he did question whether we should have been arrested or not – whether we actually did trespass.

He ordered Joyce to pay a $232 fine within 60 days or it would be attached to her income tax.  This tactic, which he also used in Bonnie’s trial, does not allow us to choose to spend the five days in jail.  For many of us, it goes against our conscience to pay the fine and we would prefer the jail time over paying the fine, but now Judge Curran has discovered a way to prevent that.

Joyce discusses this as the second time she felt blind-sided during the trial, “The second was when the judge, without ever announcing a verdict, indicated community service was not an option and announced a fine of $232 with a 60 day limit to pay or to have the amount attached to my income tax return.  I had asked for community service as an option, as had Mrs. Bonnie Block, whose trial preceded mine by two weeks.  Rev. Terry McGinley, a local clergyperson was in court with me and had agreed to act as supervisor for that service and report my hours to the court.  He had three Mauston non-profits lined up who were willing participants.  Judge Curran maintained that this would be too onerous on the court.  I find that a specious argument.  My impression is that the judge and district attorney are attempting to use their authority to tighten restrictions and options for us in the hope that we will go away.  They really do not understand that our witness is not about power or winning, but about standing with the powerless, often innocent, victims of our country’s illegal, immoral and counterproductive drone warfare.”

And so we will continue our resistance both at the base and in court.

Joyce’s statement on the stand

I would like to read a brief statement into the record this afternoon.

I stand with Fr. Jim Murphy and with Mrs. Bonnie Block in the conviction that silence in the face of the injustice of the immoral, illegal and counterproductive drone warfare being carried

out by our government makes us complicit in these crimes.  And I fully endorse and support their testimonies before this court.  By the way, judge, Bonnie had her surgery this morning and is doing well.

For me, the bottom line is that every life is precious, whether that be the life of my husband, my children, my grandchildren, my friends, drone pilots, or their victims…every life, equally precious to God and to me.

Former drone pilots are coming forward to share the trauma associated with their job.  The Air

Force now offers incentives up to $125,000 I am told,  to enlist drone pilots.  And the shortage of those willing to serve is so severe that the Air Force is contracting with private companies to provide drone pilots.  That should give us pause.  The pilots being trained at Volk Field are part of an interconnected strategy of identifying potential terrorists and their sympathizers for destruction.  Based on often unreliable intelligence,  people are targeted and killed.  It is not surprising, then, that the incidences of PTSD and suicide of drone pilots mirrors and sometimes exceeds that of combat troops on the ground.  How can you look at the strewn body parts of the men, women and children you have killed and not be affected.  The trauma to the communities and families who endure drone attacks and drone killing is incredible: daily surveillance from the sky; fear of letting their children go outside to play or go to school; afraid to attend weddings, funerals, community gatherings; afraid even to offer assistance when drone strikes happen because of the double tap strike likely to follow minutes afterward.

Their suffering is beyond words.  The legal arguments we have presented in the past are in the court record.   I will not elaborate on them here, except to say that I believe that the U.S., as a country that subscribes to the rule of law, must honor those international laws, courts and declarations we say we subscribe to, but only seem to uphold when it is in our self interest.

The Haitians, some of the poorest people in our hemisphere, have a wonderful proverb, “We see from where we stand.”  We stand in different places, judge, trying to hold on to our piece of the truth.  Sue Frankel-Streit, a member of a Catholic Worker Community in Virginia, puts it well:  “There are times in the lives of all people of conscience when the truth in one’s heart is in such deep opposition to the falsehood of the world that one must put everything else in life aside and act upon the truth.” I take full responsibility for my actions on August 5, and would only ask that you stand with me and my co-defendants to understand that there is nothing criminal in our intent or actions.  I cannot in good conscience be silent, nor can I in good conscience pay a fine for speaking my piece of the truth.

Did you receive the letter I sent you on January 19?  As you know, it concerns the possibility of community service.  I have left a copy with the court clerk and ask that it be included in the record.

I cheerfully and hopefully await the verdict of the court.  I do not think you were comfortable in sending Fr. Murphy to jail,  and I certainly agree that is a needless expense.  I hope you will consider community service as an option this court will adopt for Juneau County residents as well as us.  I would ask for permission for the possibility of a short statement from Rev. McGinley after the verdict is announced and before sentencing, and also of a question for you, judge,  should I be found guilty.