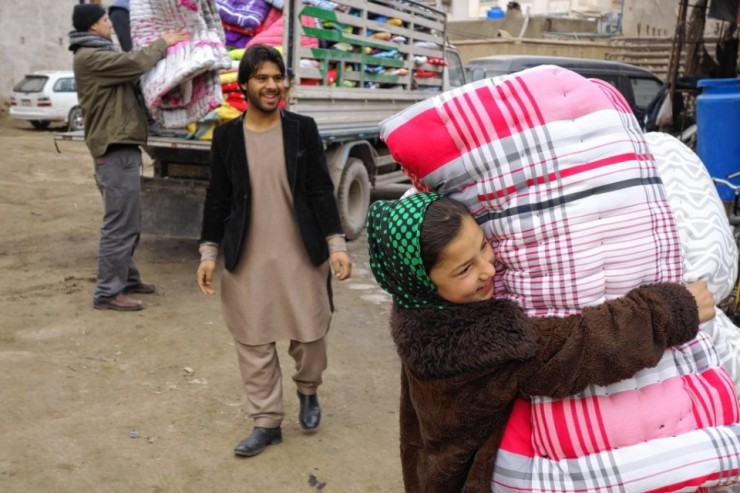 This article originally appeared on syracuse.com

A commentary by Ron VanNorstrand

“Are you out of your mind?”

My friends’ concerns were foremost in my mind as I boarded Turkish Air Flight 706 in December bound for Kabul, Afghanistan. Just a month earlier, the U.S. Department of State had warned citizens against travel to Afghanistan: “The security situation in Afghanistan is extremely unstable and the threat to all U.S. citizens in Afghanistan
remains critical.”

Although apprehensive, I was honored to be invited to join a small delegation for a 10-day, person-to-person visit with the Afghan Peace Volunteers (APV).

I was greeted at the airport by two members of the volunteer group, and, as we taxied into the city, their warm and accepting smiles eased my anxiety.

Upon arrival at the APV center, I was welcomed with open arms and open hearts. By nightfall, I felt right at home.

During my short stay, I witnessed and participated in the various ways these brave souls seek to bridge tribal and ethnic barriers in pursuit of peace and social justice.

Among their many achievements, the APV has established a School for Street Kids. The street kids are not able to attend government schools because their families depend on them to work the streets shining shoes, selling bolonis (homemade pancakes), washing cars, etc. So the APV started a school for them. Since some of the kids are illiterate, they begin with reading and writing. The kids’ joy to be learning is palpable.

Recently they started literacy classes for illiterate women as well.

The school budget is $50,000 a year, the cost of one Hellfire missile, and 92 percent is spent on providing the street kids and their families with a needed monthly gift of a sack
of rice and a bottle of oil.

The volunteer organization has also created a Winter Duvet Project, which consists of a cooperative of seamstresses who work for a decent wage producing duvets — thick blankets stuffed with synthetic wool. The duvets are given away to those in need to survive the bitter winters. Sixty seamstresses are selected each year, 20 each from the three main populations, Pashtun, Tajik and Hazara. The project is in its third year and 3,000 duvets are distributed each year.

Although they readily acknowledge the uncertainties they face, especially given the continual war waged on their country, the APV members remain committed to building a nonviolent, sharing economy where the basic needs of all, especially the most vulnerable, are met. This inspirational commitment is not based on utopian or academic notions — it arises from their life experiences. They have spent their entire lives within the turmoil and convulsions of war. They have experienced firsthand war’s social and moral devastation and degradation.

When I explained that the war is often justified in the United States as necessary to protect Afghan women from the deprivations threatened by the resurgent Taliban, one volunteer, Zarghuna, a third-year college student studying journalism whose father was killed by the Taliban when she was 7 years old, seemed perplexed by the justification. She stated firmly that the 14 years of U.S. military operations had not improved the lives of Afghan women and children. To the contrary, women and children constantly face the lack of food, employment, good education and health care. Zarghuna declared, “We do not need soldiers,” and asked the people of the United States to recognize that we are “human beings with human feelings” and that we “need food and education, not war.”

When asked what message he would like me to take back to the American people, Hoor, an 18-year-old junior in high school, first referenced the warning of two of the world’s greatest champions of peace: Bertrand Russell, the famed mathematician and philosopher, and Albert Einstein, the world’s best-known scientist, who at the height of the Cold War declared: “Shall we put an end to the human race; or shall mankind renounce war?”

Hoor questioned why the American people could not see that “even if all the Taliban were killed, their sons and daughter would pick up the guns and seek revenge,” and that “the millions spent on weapons, drones and bombs had only increased the terrorism” in his country.

He asked that we all take the time to analyze and understand the origins of groups like the Taliban and offered me a copy of “No Good Men Among the Living: America, the Taliban and the War Through Afghan Eyes,” by Anand Gopal, as a primer in this regard, which I highly recommend.

Although my visit was only about 10 days, I benefited immensely from my time with the APV. The group’s active pursuit of peace and social justice in extraordinarily difficult circumstances was inspiring.

Continuing to delude ourselves that military superiority or a military “solution” will provide security and stability — well, that would truly be crazy and mindless.

Ron VanNorstrand, of Syracuse, served in the U.S. Air Force from 1965 to 1968. He is a civil rights attorney and a member of the Syracuse Peace Council and Veterans for Peace.