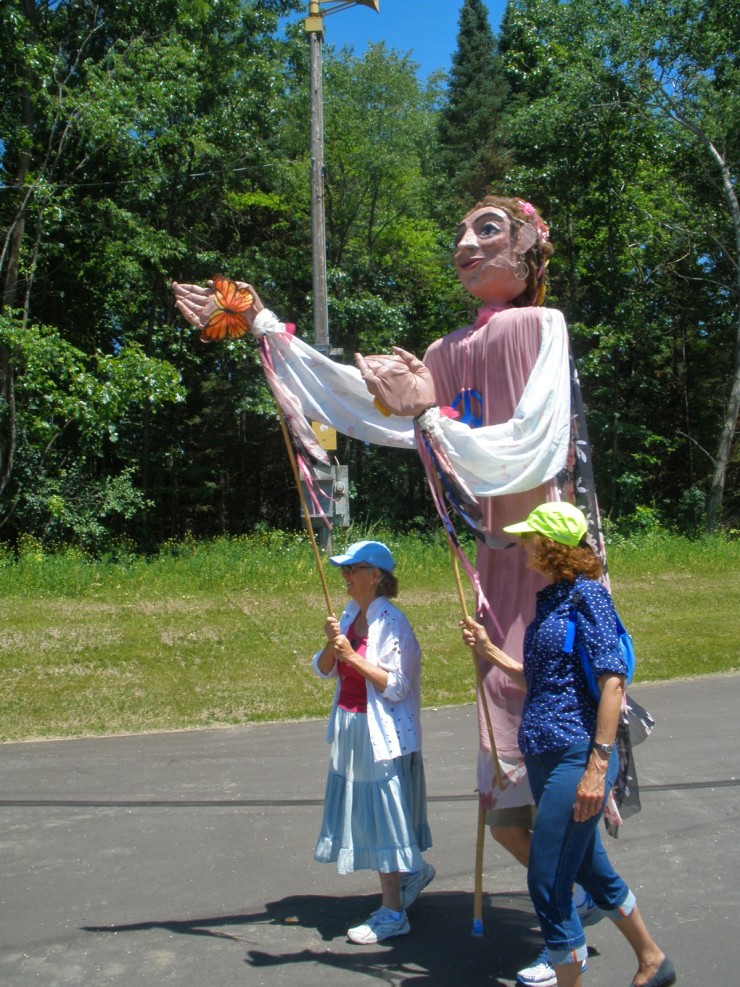 That evening some of the fifty-nine women in our Pod rushed up and
knocked on my cell door. They reported the six o’clock news had shown
twelve drone resisters handcuffed, sitting on a roadside curb, waiting
to be taken into custody.

I just started my six-month sentence on January 19, for photographing
protestors of the drone warfare directed out of Hancock Air Base in
nearby Syracuse, New York. These eight protestors, many of whom are
Catholic Workers, were later acquitted.

The resisters had fastened together thirty larger-than-life cut-out
photos of the late Jerry Berrigan, standing bold in a blue scarf. This
line of cut-outs of Jerry was held by the twelve resisters, blockading
the main gate at Hancock Air Base, where Jerry had protested for years
on a bi-weekly basis.

Shortly before he died at 95 last year, Jerry was asked during a
Syracuse Post-Standard news interview what he would have done
differently. He said: “I would have resisted more and gotten arrested
more.”

“The Jerry Berrigan Memorial Drone Blockade” was done to honor Jerry’s
wishes. It was to protest the ongoing 24-7 drone assassinations
initiated by drone operators at Hancock as part of the Obama
administration’s “kill chain.”

Hancock is presently only one of twenty U.S. drone-warfare bases
across the U.S., Germany and the U.K.  The “Drone Papers”—leaked by an
internal military whistleblower—confirm what whistle-blower drone
pilots as well as drone victims have reported: The outrageous fact
that 90% of all drone victims are bystanders, among them, many
children.

The “order of protection” has been issued on behalf of the commander
of Hancock Air Base against drone protestors. Usually such orders are
issued to protect people from physical violence and even death from
their abusive domestic partners.

Currently “protected” by the order is the commander in charge of
Hancock Air Base and its 2,000 personnel and armed soldiers—making him
the “victim” instead of the real victims, the many people killed by
the base’s MQ9 Reaper drones, firing “Hellfire” missiles.

The base commander, testifying at my trial, said: “No, I don’t know
Mary Anne Grady. No, I’ve never had a conversation with her. I’m not
afraid of her. That’s just a piece of paper. I just want these
protesters away from my base.”
This is a critical moment in the six years of Hancock Resistance.
Stopping killer drones is our #1 continued focus, no matter what tool
is used to try to chill the movement. We must keep our focus on the
voices of the drone victims.

I don’t ask for pardon, nor do my fellow drone resisters, because as
people of conscience we must speak out, as Jerry did, to stop the
death-dealing by our government and military. It is our first
amendment right to stand at the gate of Hancock Air Base, asking our
government for redress of our grievances, specifically, to end this
killer-drone policy, which in 2015 alone killed over six thousand
people.

I am warm.  I am fed.  I have good people around me.  I’m so grateful
for all your prayers and thoughts.  I feel so lifted by you and God’s
grace.  I hold you in my thoughts and prayers.

I’ll be sending more letters, please keep an eye out for them.