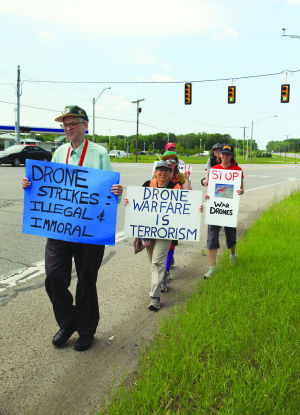 Joy First writes about Phil Runkel’s action and trial.
On Friday February 19 Phil Runkel was found guilty of trespassing in
Juneau County, WI  by Judge Paul Curran after a 22 minute trial.  Phil
had joined nine other activists in attempting to walk onto the Volk
Field Air National Guard base and meet with the commander to share our
concerns about the training of drone pilots that takes place there.

District Attorney Mike Solovey followed his standard procedure of
calling Sheriff Brent Oleson and Deputy Thomas Mueller to the stand
and identifying Phil as one of the people who walked onto the base on
August 25, 2015 and refused to leave.

Phil cross-examined Sheriff Oleson asking him about the purpose of the
space between the gates and guard house.  Oleson responded that the
space was used so that cars waiting to enter the base didn’t back up
onto the county highway.  Phil asked when it was legal to be in that
area and Oleson responded that it was when you are given permission.
But that isn’t true.  Cars drive through the gates and about a block
to the guard house and wait to talk to the guard without getting
permission to wait in that space.

The state rested their case and Phil told the judge he would like to
be sworn in to testify and then give a brief closing statement.

Your Honor:
I am employed by Marquette University, where it has been my privilege
to have served since 1977 as archivist for the papers of sainthood
candidate Dorothy Day. She has often been lauded for her performance
of the works of mercy—most recently by Pope Francis–but scorned for
her equally steadfast opposition to the works of war. This led to her
arrest and imprisonment on three separate occasions for failure to
take cover during civil defense drills in the 1950s. I am one of many
who have been inspired by her example to seek peace and pursue it.

I respectfully plead not guilty to this charge. Following World War II
the International Military Tribunal at Nuremberg declared that
“Individuals have international duties which transcend the national
obligations of obedience imposed by the individual State.” (Trial of
the Major War Criminals before the International Military Tribunal,
vol. I, Nürnberg 1947, page 223).This was one of the Nuremberg
Principles adopted by the International Law Commission of the United
Nations in 1950 to provide guidelines for determining what constitutes
a war crime.  These principles are arguably part of customary
international law and part of domestic law in the United States under
Article VI, paragraph 2 of the US Constitution  (175 U.S.677, 700)
(1900).

Former US attorney general Ramsey Clark testified under oath, at a
trial of drone protesters in Dewitt, NY, that in his legal opinion
everyone is obligated under the law to try to stop their government
from committing war crimes, crimes against peace and crimes against
humanity
(http://www.arlingtonwestsantamonica.org/docs/Testimony_of_Elliott_Adams.pdf).

I acted out of a conviction that the use of drones for extrajudicial,
targeted killing constitutes such a war crime, and I sought to apprise
base commander Romuald of this fact. I intended to uphold
international law. (As Ms. First noted at her trial last week, Judge
Robert Jokl of Dewitt, New York, acquitted five resisters for their
action at the Hancock drone base because he was persuaded that they
had the same intention.)

Article 6(b) of the Nuremberg Charter defines War Crimes–violations
of the laws or customs of war– to include, among other things, murder
or ill treatment of civilian population of or in occupied territory.
Weaponized drones, assisted by reconnaissance and surveillance drones
piloted from bases such as Volk Field, have killed between 2,494-3,994
persons in Pakistan alone since 2004. These include between 423 and
965 civilians and 172-207 children. Another 1,158-1,738 have been
injured. This is data compiled by the award-winning Bureau of
Investigative Journalism, based in London
(https://www.thebureauinvestigates.com/category/projects/drones/drones-graphs/).

According to the legal scholar Matthew Lippman (Nuremberg and American
Justice, 5 Notre Dame J.L. Ethics & Pub. Pol’y 951 (1991). Available
at: http://scholarship.law.nd.edu/ndjlepp/vol5/iss4/4)
citizens have “the legal privilege under international law to act in a
non-violent proportionate fashion to halt the commission of war
crimes. “  He contends that “Nuremberg… serves both as a sword which
can be used to prosecute war criminals, and as a shield for those who
are compelled to engage in conscientious acts of moral protest against
illegal wars and methods of warfare.”

Lippman counters the common admonition for protesters to confine
themselves to legally-sanctioned means of dissent, such as lobbying
congresspeople. He cites Judge Myron Bright, of the 8th Circuit Court
of Appeals. Dissenting in Kabat, Judge Bright stated that: “We must
recognize that civil disobedience in various forms, used without
violent acts against others, is engrained in our society and the moral
correctness of political protesters’ views has on occasion served to
change and better our society.”

To Professor Lippman, “Today’s obscenity may be tomorrow’s lyric.”

I’ll conclude, then, with these words from a song many of us know:
“Let there be peace on earth. And let it begin with me.”

Note that Phil was stopped in the fifth paragraph, giving statistics
on the number of people killed by drones, when DA Solovey objected
citing relevance and Curran sustained the objection.  Phil was not
able to complete his statement, but it is included in this report
because he provided valuable information that could be useful in
future cases.

Curran asked Phil what his testimony has to do with trespassing and
Phil began to talk about why he walked onto the base when the DA
interrupted and said there is nothing about intent in the statute.  As
Phil persisted in trying to explain his actions to the judge, Curran
became increasingly agitated and angry.  He said he didn’t need to be
lectured by Phil about Nuremberg.

Phil tried to explain he was acting under the belief that he was
obliged to enter the base, and that we are compelled to engage in
resistance to illegal warfare.  Again, Curran made his same old
argument that his court is not going to tell Obama that what he is
doing is illegal.  That continues to be a false argument that the
judge makes in many of our trials.

Phil was very persistent in trying to get his point across and
continued to argue his case, but the judge could not hear anything he
was saying.

This is the closing statement Phil would have liked to present.
I stand with my co-defendants in the conviction that silence in the
face of the injustice of the immoral, illegal and counterproductive
drone warfare being carried out by our government makes us complicit
in these crimes.  And I fully endorse and support their testimonies
before this court.

In his book The New Crusade: America’s War on Terrorism, Rahul Mahajan
wrote, “If terrorism is to be given an unbiased definition, it must
involve the killing of noncombatants for political purposes, no matter
who does it or what noble goals they proclaim.” I ask your honor to
consider which poses the real threat to peace and right order—the
actions of groups such as ours, or those of the CIA and other agencies
responsible for our drones policy.

Again, a very disappointing outcome, but Phil reminds us of the
importance of what we are doing and why we must continue as he states,
“I was disappointed, of course, that Judge Curran didn’t allow me to
finish my testimony or make a closing statement. But such rulings
won’t deter us from continuing to speak our truth to the powers that be.”