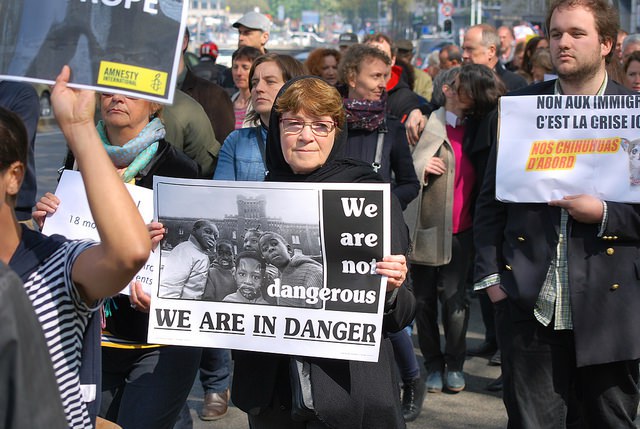 In Brussels, more than 1,200 people protest against Europe’s unwillingness to do more about the refugee crisis in the Mediterranean, April 23rd, 2015. By Amnesty International.

Today, one in every 122 humans living on the planet is a refugee, an internally displaced person, or an asylum-seeker. In 2014, conflict and persecution forced a staggering 42,500 persons per day to leave their homes and seek protection elsewhere, resulting in 59.5 million total refugees worldwide. According to the UN refugee agency’s 2014 Global Trends report (tellingly entitled World at War), developing countries hosted 86% of these refugees. Developed countries,  such as the U.S. and those in Europe, host only 14% of the world’s total share of refugees.

Yet public sentiment in the West has been tough on refugees lately. Resurgent populist and nationalist leaders routinely play to public anxieties about refugees as “lazy opportunists,” “burdens,” “criminals,” or “terrorists” in response to today’s refugee crisis. Mainstream parties aren’t immune to this rhetoric either, with politicians of all stripes calling for increased border controls, detention centers, and the temporary suspension of visa and asylum applications.

Importantly, none of these panicky characterizations of refugees is born out by systematic evidence.

The most reliable empirical studies of refugee movements suggest that the primary cause of flight is violence—not economic opportunity. Mainly, refugees are fleeing war in hopes of landing in a less violent situation. In conflicts where the government actively targets civilians in the context of genocide or politicide, most people choose to leave the country rather than seek out safe havens internally. Surveys bear out this reality in today’s crisis. In Syria, one of the world’s major producers of refugees in the last five years, survey results suggest that most civilians are fleeing because the country has simply become too dangerous or that government forces took over their towns, placing most of the blame on the horrific politicidal violence of Assad’s regime. (Only 13% say they fled because rebels took over their towns, suggesting that ISIS’s violence is not nearly as much a source of flight as some have suggested).

And refugees rarely choose their destinations based on economic opportunity; instead, 90% of refugees go to a country with a contiguous border (thus explaining the concentration of Syrian refugees in Turkey, Jordan, Lebanon, and Iraq). Those that do not stay in a neighboring country tend to flee to countries where they have existing social ties. Given that they are typically fleeing for their lives, the data suggest that most refugees think about economic opportunity as an afterthought rather than as a motivation for flight. That said, when they arrive at their destinations, refugees tend to be exceedingly industrious, with cross-national studies suggesting that they are rarely burdensome for national economies.

In today’s crisis, “Many of the people arriving by sea in southern Europe, particularly in Greece, come from countries affected by violence and conflict, such as Syria, Iraq and Afghanistan; they are in need of international protection and they are often physically exhausted and psychologically traumatized, ” states World at War.

In terms of security threats, refugees are far less likely to commit crimes than natural-born citizens. In fact, writing in the Wall Street Journal, Jason Riley evaluates data on the link between immigration and crime in the United States and calls the correlation a “myth.” Even in Germany, which has absorbed the highest number of refugees since 2011, crime rates by refugees have not increased. Violent attacks on refugees, on the other hand, have doubled. This suggests that refugees do not post a problem for security; instead, they require protection against violent threats themselves. Moreover, refugees (or those who claim to be refugees) are highly unlikely to plan terror attacks. And given that at least 51% of current refugees are children, like Aylan Kurdi, the three-year-old Syrian refugee who famously drowned in the Mediterranean sea last summer, it is probably premature to preordain them as fanatics, troublemakers, or social rejects.

Moreover, refugee-vetting processes are exceedingly stringent in many countries—with the U.S. having among the most stringent refugee policies in the world—thereby precluding many of the adverse outcomes feared by critics of status quo refugee policies. Although such processes do not guarantee that all potential threats are excluded, they mitigate the risk considerably, as demonstrated by the paucity of violent crimes and terror attacks committed by refugees in the past thirty years.

A Broken System or A Broken Narrative?

Speaking about the current refugee crisis in Europe, Jan Egeland, the former UN Humanitarian Envoy who now heads the Norwegian Refugee Council, said, “The system is totally broken…We cannot continue this way.” But the system probably won’t mend as long as broken narratives dominate the discourse. What if we introduced a fresh discourse, which dispels the myths about refugees and equips the public to contest existing discourse with a more compassionate narrative about the way one becomes a refugee in the first place?

Consider the choice to flee instead of stay and fight or stay and die. Many of the 59.5 million refugees left in the crossfires between states and other armed actors—such as the Syrian government’s politicide and violence among a wide variety of rebel groups operating within Syria; Syria, Russia, Iraq, Iran, and NATO’s war against ISIS; Afghanistan and Pakistan’s wars against the Taliban; the on-going U.S. campaign against Al Qaeda; Turkey’s wars against Kurdish militias; and a multitude of other violent contexts around the world.

Given the choice between staying and fighting, staying and dying, or fleeing and surviving, today’s refugees fled—meaning that, by definition, they actively and purposefully chose a non-violent option in the context of mass violence raging all around them.

In other words, today’s global landscape of 59.5 million refugees is mainly a collection of people who have chosen the only available non-violent pathway out of their conflict environments. In many respects, today’s 60 million refugees have said no to violence, no to victimization, and no to helplessness at the same time. The decision to flee to strange and (often hostile) foreign lands as a refugee is not a light one. It involves taking significant risks, including the risk of death. For example, the UNHCR estimated that 3,735 refugees were dead or missing at sea while seeking refuge in Europe in 2015. Contrary to contemporary discourse, being a refugee ought to be synonymous with non-violence, courage, and agency.

Of course, an individual’s non-violent choice at one time does not necessarily predetermine that individual’s non-violent choice at a later juncture. And like many large mass assemblages, it is inevitable that a handful of people will cynically exploit the global movement of refugees to pursue their own criminal, political, social, or ideological aims on the fringes—either by concealing themselves in the masses to cross borders to commit violent acts abroad, by taking advantage of the political polarization of migration politics to promote their own agendas, or by extorting these people for their own criminal purposes. Among any population this size, there will be criminal activity here and there, refugee or not.

But in today’s crisis, it will be essential for people of good faith everywhere to resist the urge to ascribe nefarious motivations to the millions of people seeking haven in their countries, because of the violent or criminal actions of a few. The latter group does not represent the general statistics on refugees identified above, nor do they negate the fact that refugees are generally people who, in the context of truly dislocating violence, made a life-altering, non-violent choice to act for themselves in a way that cast them and their families into uncertain futures. Once they arrive, on average the threat of violence against the refugee is much greater than the threat of violence by the refugee. Shunning them, detaining them as if they were criminals, or deporting them to war-torn environments sends a message that non-violent choices are punished—and that submitting to victimization or turning to violence are the only choices left. This is a situation that calls for policies that embody compassion, respect, protection, and welcome—not fear, dehumanization, exclusion, or revulsion.

Seeing flight as a non-violent option will better equip the informed public to contest exclusionary rhetoric and policies, elevate a new discourse that empowers more moderate politicians, and widen the range of policy options available to respond to the current crisis.

Hakim Young (Dr. Teck Young, Wee) is a medical doctor from Singapore who has done humanitarian and social enterprise work in Afghanistan for the past 10 years, including being a mentor to the Afghan Peace Volunteers, an inter-ethnic group of young Afghans dedicated to building non-violent alternatives to war.