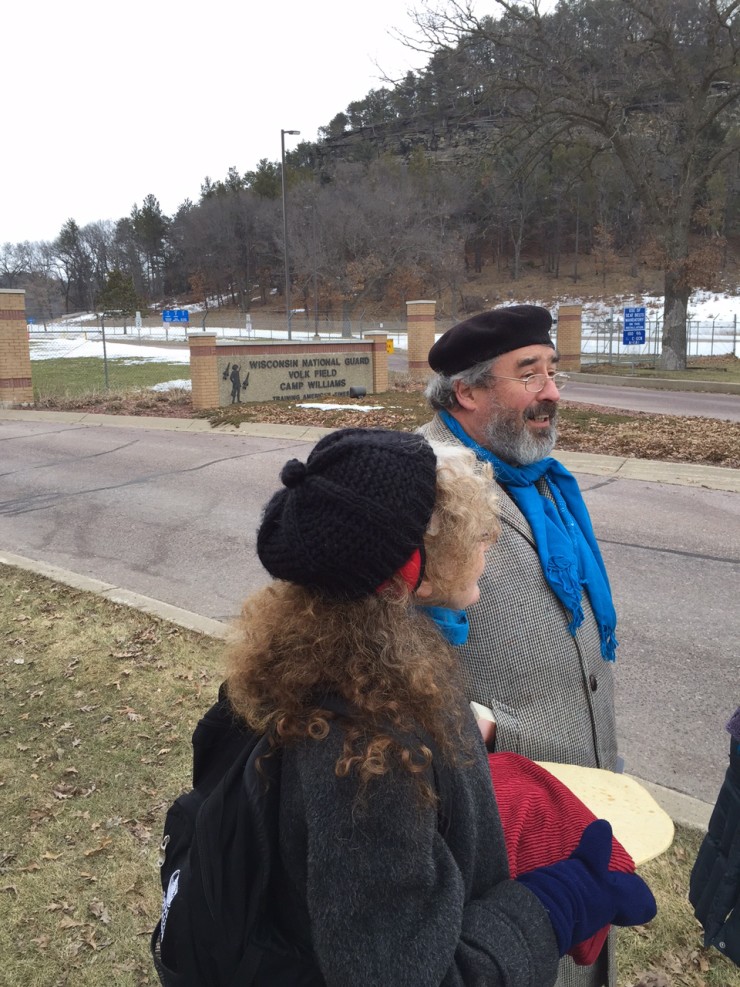 Camp Douglas, WI — On February 23rd, two peace activists with Voices for Creative Nonviolence, Brian Terrell and Kathy Kelly, were arrested when they attempted to deliver a loaf of bread and a letter to drone operators at Volk Field, an Air National Guard Base in Wisconsin, which trains pilots to operate Shadow Drones over other countries. Voices activists have lived alongside ordinary people in Afghanistan, Pakistan, Iraq and Gaza. People who can’t flee from drone surveillance and attacks have good reason to fear people from the U.S., but instead they have broken bread with Kelly and Terrell and have welcomed opportunities for deepened mutual understanding. Kelly and Terrell carried the loaf of bread to signify the worth of relying on words rather than weapons.

Before entering the base property, Kathy Kelly said: “Living alongside ordinary people who can’t escape drone surveillance in places like Iraq, Gaza and Afghanistan and knowing that a drone operator could be ordered to assassinate civilians who have nowhere to turn and nowhere to hide affected my conscience. I wanted to ask drone operators in Volk Field whether they had been asked to target any people for possible assassination that day.  I want to ask how the base training manual teaches people to distinguish between civilians and armed combatants. If an operator wants to quit, what does the commander of Volk Field do?”

Brian Terrell also noted: “Wisconsin is where I was born and raised and so I feel that coming to Volk Field is a responsibility that I owe in gratitude to my home state. The premise that drones will limit the parameters of war and make for fewer civilian casualties has proven false. General Stanley McChrystal, who led troops in Afghanistan from June 2009 to June 2010, warned that the drone ‘lowers the threshold for taking operations because it feels easy, there’s a danger in that.’ And yet the evolution of drones in the militaries of many countries around the globe has been anything but cautious. Instead there is a reckless proliferation of this deadly technology.”

Terrell and Kelly will be arraigned on February 24th, after 2:30 p.m., at the Juneau County Justice Center, 200 Oak St., in Mauston, WI. Also, on February 25th, at 9:00 a.m., Mary Beth Schlagheck, will be tried for having crossed the line at Volk Field in August of 2015.  Hers is the last of seven trials stemming from nonviolent civil resistance actions at Volk Field that were undertaken as the culmination of the “Let It Shine” walk from Madison to Volk Field. The witness of the activists who have protested at Volk Field, and who have testified so eloquently in court, inspired Brian’s and Kathy’s action.

On February 24th, two co-coordinators of Voices for Creative Nonviolence, Brian Terrell and Kathy Kelly, appeared before Judge Curran from the Juneau County jail via the jail’s video link.  The two had been held overnight.  They were served documents charging them with trespass at the “dwelling” of Volk Field.  Pilots train at Volk Field to operate Shadow Drones over other countries.

Kelly told Judge Curran that she wished to plead no contest and that she would not be able, in conscience to pay a fee and that she preferred not to promise that she’d return to the court since she didn’t believe she had committed a crime in the first place. “Oh, I get what’s happening here.  You have some people out there who will give you a gold star and a pat on the back for being so courageous,” said Judge Curran.  He then said he would not impose a cash bond and he set a pre-trial conference date for March 23rd even though Kelly had already indicated that she wished to plead no contest and was not seeking a trial.

Terrell appeared next.  He reiterated what Kelly had said, wishing to plead no contest and go directly to sentencing.  “It would save the county, the court and everyone involved time and trouble if the judge would accept the no contest plea,” said Terrell, “and go right to sentencing. I don’t understand why a pre-trial conference was scheduled when we haven’t asked for a  trial.”

“It’s not necessary for you to understand the process of this court,” said Judge Curran. “That’s why God made lawyers.”

Kelly and Terrell were released after signing personal recognizance bonds. On February 25th they returned to the court to attend Mary Beth Schlagheck’s trial for a protest at Volk Field last August. Due to an emergency hospitalization of one of the state’s witnesses, her trial was postponed.

Following the hearing, District Attorney, Michael Solovey agreed to an informal conference with Kelly and Terrell. He discussed a motion Terrell had filed that morning to dismiss the criminal charge of trespassing at a dwelling. Mr. Solovey said he expected the charge to be changed to the less serious forfeiture of trespassing on land.  He was ready to accept a plea of no contest when he learned, at the end of the conference that the U.S. Air Force was asking for another criminal charge of disorderly conduct alleging that Kelly and Terrell had disrupted traffic in their protest.  Kelly and Terrell told him a video taken by Joy First would verify that Kelly and Terrell did not disrupt traffic.

Kelly and Terrell await word from the DA about whether he will seek an additional charge.  “We’re building on earlier efforts by Wisconsin activists,” said Terrell, “and we see today’s events as part of a continuum.”