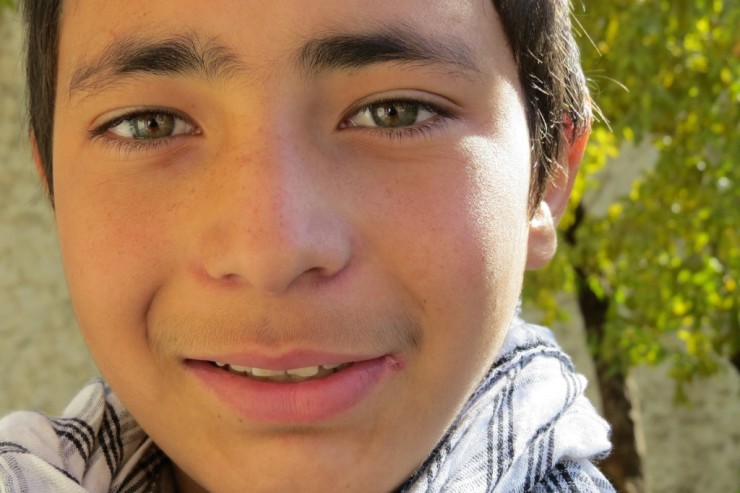 Dr. Hakim, connecting us with how many global crises a 15 year old Afghan faces on a daily basis.

On 31st Jan, I followed Zekerullah, an Afghan Peace Volunteer who coordinates the Borderfree Street Kids School in Kabul, to visit Zuhair and his family in their rented room. Zuhair attends the School on Fridays with 92 other working and street kids, a minuscule number in the context of 6 million working children in Afghanistan.

My heart squirmed at the unequal math of today’s economics.

In any world, children should have access to water, but in an internationally supported, ‘most-drone-attacked’ and ‘democratic’ Afghanistan, Zuhair is one person among 73% of the Afghan population who do not have access to clean, potable water.

Partly, Afghanistan and the world’s drinking water is drying up. And contaminated.

A recent analysis estimates that 4 billion people, two thirds of the world’s population, are affected by a falling water table.

I was challenged; since the Afghan and allied international governments don’t seem too bothered about resolving the root causes of the water, environmental or any crisis, what could the Afghan Peace Volunteers and I do?

“Zuhair, after your apprenticeship at the bicycle repair shop, were you able to handle common bike repairs?” I asked him two months ago.

Zuhair has striking green Afghan eyes, and a gentle spirit. He hesitated very slightly, and then… he said, “Yes.”

The Afghan Peace Volunteers have plans to open a bicycle repair shop as part of their ‘Borderfree Afghan Cycling Club’ plans. So, we were hoping to involve Zuhair. 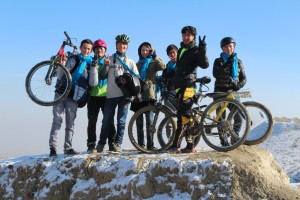 “For how many months were you an apprentice?”

“Three months,” he replied, obviously very keen to work and earn some money.

Three months after four decades of war….I had my doubts and wished there was enough work for Afghan adults, so kids didn’t have to feel so desperate.

Zek and I boarded a packed mini-bus towards Zuhair’s house. Finally ‘sandwiched’ in the back row of the bus, we found ourselves seated next to an old, bespectacled, kindly-looking man. “Do you know where Breshnakot is?” he asked with a smile revealing the few remaining tea-tainted teeth he had. 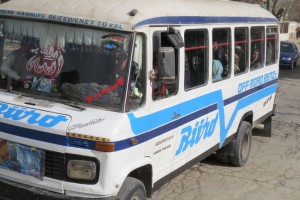 A minibus in Kabul

“At this age, I’m losing my memory. I’ve a high-ranking friend in the Ministry of Defence. I complained to him, ‘Why don’t you send me for medical treatment abroad?”

“There, I can have a ‘memory transplant’, and for my ‘jigar-khuni’ ( Dari phrase meaning ‘liver bleeding’ from sorrow ), a liver transplant too!”

“Zek, who will meet us at Guzar Bridge?”

Zek glanced around the Bridge quickly. With a twitch of his eyes, he gestured to a woman in a blue burqa seated on a ledge between the dusty road and the polluted river, “That could be his mother.”

Next to her on the ledge were red, green and yellow bottles of diluted dishwashing liquid displayed by a street vendor.|

I could make out that, under the burqa, she had picked up Zek’s phone call as we walked towards her. She was Zuhair’s mother, not to be seen by the world. 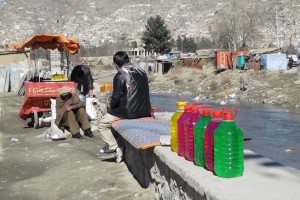 Zuhair’s mother was sitting on the ledge in a blue burqa. Houses can be seen on the hill.

I could hear her panting as she took each step on a sloping footpath that zig-zagged up the mountainside. We walked past tiny gullies filled with trash and sewerage, and then suddenly, a plastic water pipe. 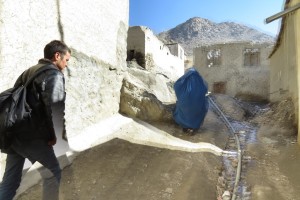 Going up the hill. The water pipe can be seen in a gulley. Zuhair’s mother walks in front of Zek.

“The private company that laid the water pipes collected our money, and then ran away! Zuhair has to fetch water from a public well every day,” Mother said.

We saw kids fetching water, some using a wheelbarrow to carry a horde of used cooking oil containers. 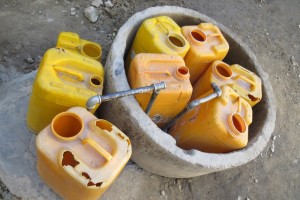 Containers at a well.

There was no attempt to lay the pipe underground; it bent around corners, cut across the path, traversed high and low. It is an open scandal describing today’s politicians, appearing to do public good, but really, cheating breathless mothers and children.

Zuhair’s sister was sitting on a cushion against the wall in the three-by-two-meter room, like a frail but dignified princess. She coughed occasionally.

On a window ledge were stupefying factory-made medicines, cefoxime and azithromycin, that are creating for all of us another global crisis – superbugs that can resist our common spectrum of antibiotics. 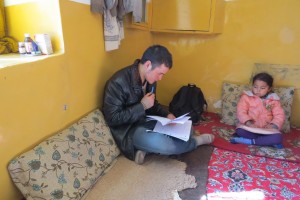 Zek conducting the survey in Zuhair’s home. Zuhair’s sister is looking on.

“The poor doctor who used to treat all of us!” Mother lamented. “Somebody put bullets through him, and stole his stack of money. He was a good doctor, giving patients needed injections without the need for prescriptions…”

Zuhair wasn’t home. Mother had sent him to his aunt’s place to wash clothes with the aunt’s well water.

“We were wondering if Zuhair can run a bike repair shop,” I said.

“We did send him to be an apprentice, but he was so small then, and in three months, what could he have learnt? Moreover, if he works at a shop, who will fetch the water?” Mother thought aloud.

“His father is a wheelbarrow-man ( transports goods with a wheelbarrow for a fee ). He only brings home about 80 to 100 Afghanis daily. You know how there are so many wheelbarrow-men standing around waiting for a customer!”

I looked out of the window in the direction of Babur Garden, the restive resort palace of King Babur, the Mughal Emperor. Almost five centuries after Babur, world governance hasn’t quite freed us yet. While a tiny elite of individuals own mansions and parks, we’re still subjects.

At a corner was a gas cylinder, a metal can of oil, a pot, a pressure cooker and salt; their one room was their kitchen, living room and bedroom all rolled into one. 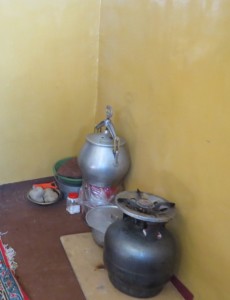 As we left, I noticed the ubiquitous yellow water container in the narrow doorway, a small one. 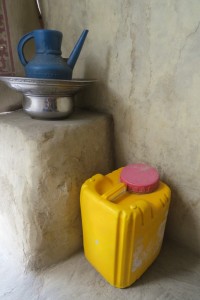 “My husband and I understand that Zuhair is still young, and that it gets tiring for him, so we got him a smaller-size container,” Mother laughed fondly.

“And oh yes, you should take a photo of the pipe outside, the pipe that doesn’t supply us any water.

As we crossed the busy main road, Zek asked, “Hakim, what does ‘explosion’ mean?”

Zek had heard this English word being used so many times in the past few months that its sound and pronunciation had stuck in his mind.

Two weeks ago, further along that very road, a suicide bomber had set himself off near a bus carrying employees of Tolo Television, killing seven.

Such news has lost its ability to teach us anything new, because we’re all so entrenched in our reflexive conclusions.|

In this instance, we lay the blame solely on the Taliban, because the media and the world says so. We no longer ask what the late White House journalist Helen Thomas asked Obama’s Counter-Terrorism Advisor, John Brennan, “And what is the motivation (of the terrorists)? We never hear what you find out on why.”

In other words, our leaders can skip the root causes. Most of us are too tired or busy to question the world.|

Likewise, we presume that only 27% of Afghans, including kids like Zuhair, have access to drinking water because they are ‘backward people’ who did not work hard to improve their lives in the past decades. 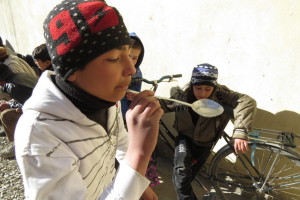 “Zek, what was the story Barath Khan told us the other evening about the ear and the dog?”

“I can’t remember.” Zek looked pensive for a few moments.

“Oh, I remember now: A man was told by his friend, ‘Hey! The dog bit off one of your ears!’. Without hesitation, and without even so much as checking his intact ears, the man ran off angrily after the dog.”

Playing on our fears, we have been told repetitively that the ‘Taliban’, and the latest ‘demon’, the ISIS, have ‘bit off’ our water, or our electricity or our security.

We have lost the ability to demand critical facts, and to ‘check our ears’, and to pursue solid evidence. We seldom visit people and places like Zuhair’s mother’s room on the Afghan hill.

But, for once, and literally, ‘for-ever’, for the children, for mothers and for all humanity, we should not give up till we help one another undo these man-made crises.

Dr Hakim, ( Dr. Teck Young, Wee ) is a medical doctor from Singapore who has done humanitarian and social enterprise work in Afghanistan for the past 9 years, including being a friend and mentor to the Afghan Peace Volunteers, an inter-ethnic group of young Afghans dedicated to building non-violent alternatives to war. He is the 2012 recipient of the International Pfeffer Peace Prize.