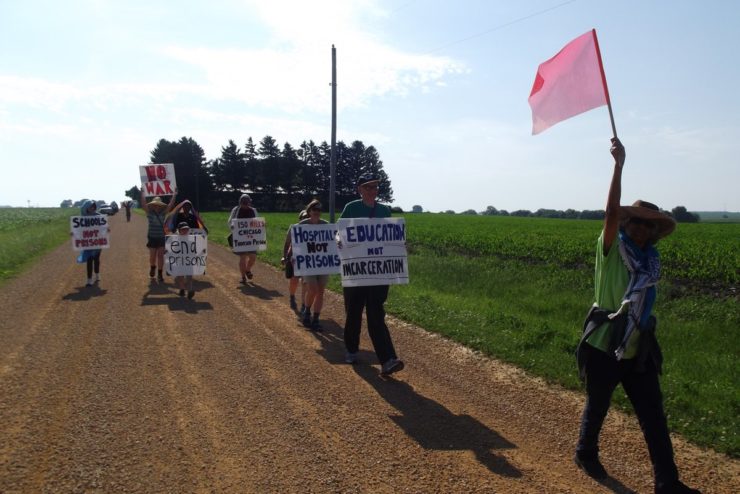 In late May and early June, Chicago group Voices for Creative Nonviolence held a 150-mile walk against indefinite detention, solitary confinement, and the racist U.S. prison system. For two weeks, a group of 20 justice seekers walked across the state of Illinois from east to west, interacting with hundreds of passers-by, carrying placards to give a momentary reminder to thousands of motorists, and holding public face-to-face discussions at churches and libraries. They began on May 28 at the Metropolitan Correctional Center in downtown Chicago and then walked through Chicago’s west side, the western suburbs, on to DeKalb and the rural northwest part of the state.

The march swelled to 35 by the last day, June 11. When the walkers arrived in the small town center of rural Thomson, IL, they noticed that 18 police cars were staged in this town of 600 residents. Carrying placards saying “Education Not Incarceration” and “Hospitals Not Prisons”, the activists continued walking the final mile up to the Administrative U.S. Penitentiary, Thomson, which is expected to open in 2017.

The word “administrative” is a euphemism for a facility which consists entirely of isolation cells, in this case 1,900 of them, according to the watchdog organization Solitary Watch. The U.S. Bureau of Prisons would try to fill these cells by taking prisoners from other prisons to bring them to Illinois, a state where activists have spent decades furthering a general awareness of solitary confinement. The general disgust with solitary confinement in Illinois recently forced the state assembly to consider a House Bill 5417, legislation that requires a documented reason for putting any prisoner in isolation confinement and which limits the duration of such confinement to not more than 5 days.

The walkers admonished the U.S. government for not releasing the remaining prisoners in Guantanamo Bay, who for 14 years have not been charged with any crime. It is thought that Thomson prison may still be part of a murky and politically expeditious plan to avoid releasing these detainees by simply moving them around. Similar to having people wait years and years without a speedy trial in Cook County jail, indefinite detention without charge or trial is a government crime, the brunt of which falls on poor people and on people of color, especially Black people, who on the national level in 2008 were 6 times more likely to go to prison than white people, according to the NAACP.

The walk to Thomson prison is a recently woven row in the vast tapestry of work being done to challenge the prison system. The more work that can be done to engage people on the issue of mass imprisonment, the better. Facilitating dialogue and sparking people’s imaginations can eventually lead to a diversion of public resources away from building prisons and into alternatives that help to build a healthier society.