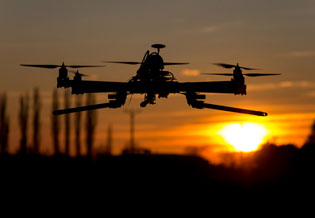 Weaponized Drones And The Endless “War on Terror”

Terrorism — past and present — pervades the U.S. psyche and economy. Terrorism, so-called, and the fear thereof, blunts our minds, shrinks our hearts. This contrived national obsession gives the Pentagon and NSA/Homeland Security their ever-expanding powers. It tightens their grip. It swells their coffers.

Their bloated budgets, like the Congress that funds them, march to corporate drummers. Since World War II, terrorism/militarism has been exceedingly profitable for the so-called “defense” industry (think, for example, Lockheed Martin). U.S. corporations thrive on the export of weapons and weapon systems. Peace kills the war economy. Why seek peace?

The definition has four corollaries:

~ First. Contrary to U.S. mainstream media usage, terrorists aren’t inevitably people of color. Nor are they primarily swarthy or sallow. Here in the U.S. the term “terrorism” somehow only applies to what they – non-whites – do, not to what whites or the U.S. does.

~ Last. Since at least August 6, 1945 the Pentagon has been the world’s most relentless single purveyor of terrorism.

Bottom line: the so-called “war on terror” is a racist war, a war for hegemony, a war for profit. It’s a war its perpetrators and its perpetuators have no desire to see end.

Yes, we are occupiers – and by a curious inversion or dialectic, now it is U.S. Americans who are finding ourselves occupied. The occupation is so incremental, so normalized, it’s barely visible to us.

If the U.S.-as-occupied-nation notion seems outlandish, consider the following:

Further, regarding our national DNA, consider the centuries-long wholesale abduction and displacement of Africans – robbing them of their labor, liberty, languages, dignity and their offspring. Ask: how did such a regime last so long? Without a whip at her back, a noose around his neck, no human endures such rape and servitude. See the film “12 Years a Slave.”

Today’s so-called “War on Terrorism” — quotation marks are a must — features aerial bombing of tribal people and people of color who can barely shoot back: the Anglosphere globalizing its centuries-long terror track.

Since August 6, 1945 the world has been chilled by U.S. nuclear blackmail. Since the grotesquely one-sided air war on Viet Nam and since the 2003 “shock and awe” terror attacks on Baghdad, the world knows it resists the Imperium at its peril. The world knows the U.S. mostly and more readily targets people of color – whether Japanese, Southeast Asian, West Asian, or…American. The dark-skinned world waits, defiantly, wondering who will be next.

Aerial terror can’t neutralize, but it does provoke, non-state resistance – a resistance sporadically erupting as terrorism. How convenient for the propagandists! The hunter/killer MQ9 Reaper drone and its cowardly ilk seem for now to be just the thing for taking out so-called “bad guys.” However, for each “bad guy” assassinated, many civilians are killed or maimed. More are recruited to resist. Not smart. While drones can be tactically clever, recruiting your enemy is strategically stupid…unless, of course, you profit from keeping the pot boiling.

Up our way in Central New York the local mainstream media normalizes the hunter/killer Reaper drone remotely piloted from Hancock Air Force Base on the outskirts of Syracuse. The Reaper, a former Hancock commandant boasts, operates over Afghanistan 24/7. These robots are deployed to kill with impunity. The media downplay, if not ignore, drone war illegality, its evasion of due process, its violating others’ sovereignty, and the government lies surrounding its terror. The media sanitize Reaper transgression against human bodies and human rights. The media ignore Reaper indecency, Reaper cowardice.

The Syracuse Post-Standard ignores the back story behind any blowback – always called “terrorism” — of those avenging and resisting U.S. aggression. Further, perhaps sensing instinctively what a boon to business drones and arms races are, the Post ignores the deadly prospect of weaponized drone proliferation.

U.S. media has little to say about drone “collateral damage” incinerating and dismembering women and children and other noncombatants, whether within or beyond so-called “legal” war zones. But our local media surely typify U.S. mainstream media. So, let me ask: how many in this room heard much about the killing of 150 unknown human beings by U.S. drones and manned aircraft on a single day, March 7, 2016, in Somalia – Somalia, a desperately poor tribal nation the U.S. isn’t even at war with? This massacre, noted in the New York Times, didn’t rate a blip in the Post-Standard.

The December 17 Post-Standard reported that the Reaper now is actually flying – not just being remotely controlled — out of Hancock Air Force Base and from Syracuse’s civilian international airport. The page 1 story, festooned with color photos, is headlined “REAPER DRONE MAKES HISTORY IN SYRACUSE.”

With no pretense to journalistic balance, such stories fail to note that since 2010 our grassroots group, Upstate Drone Action, has been continually protesting the Hancock Reaper and its operating unit, the 174th Attack Wing of the New York State National Guard. The increasingly militarized local police, at Hancock’s bidding, arrest us as we block Hancock’s main gate and exercise our First Amendment right to petition the government for redress of grievance. Maximum fines and multiple incarcerations ensue.

But the Post-Standard doesn’t acknowledge such erosion of civil liberty. Nor does it investigate or even mention our allegations of Hancock war crime. Further, the Post has been eerily silent about the role that domestic drones are beginning to play in policing and intimidating dissidents and minorities.

Like the 1950s’ “Atoms for Peace” hype masking the dark side of the then-emerging nuclear industry, mainstream media downplay the drone dark side. The Post, it seems, doesn’t want to jinx upstate New York’s becoming the Silicon Valley of an emerging domestic drone money machine. Over the next several years Governor Cuomo will be subsidizing that industry with tens of millions of taxpayer dollars.

What does domestic drone development and deployment have to do with terrorism? Plenty. Like the government-subsidized nuclear industry, the domestic drone industry (again think Lockheed Martin) will maintain the facilities, research, engineering expertise, skilled labor, and operators – i.e. the industrial base – that the Pentagon draws on for its terror wars.

As long as perpetual war keeps yielding corporate profit, state terrorism will keep “making history.” If we let it.